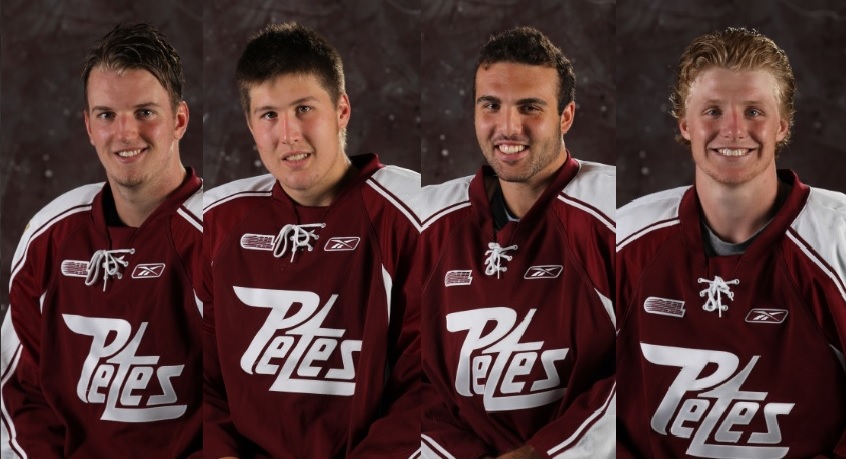 Connor Boland has been named Captain, and Stephen Pierog, Nelson Armstrong, and Nick Ritchie have been named Assistant Captains.

Boland, an 18 year old from Whitby, is entering his fourth season with the Maroon and White. The defenceman has played in 117 games with the Petes, scoring one goal and ten assists in his career with the team to date and adding 71 penalty minutes. He recently returned from Buffalo where he earned an invite to Sabres Main Camp following a successful showing at Rookie Camp.

Pierog enters his third season with the Petes, having shown consistent improvement on both ends of the ice as well as in the locker room. The 19-year old Centre from Guelph has scored 28 goals and 22 assists along with 125 penalty minutes in 128 career games with the Petes. Pierog attended Carolina Hurricanes Rookie Camp this September.

Nick Ritchie is entering his third season with the Petes. The 17-year old winger has scored 34 goals and 40 assists in 103 games with the Petes. He also represented Canada at the U-18 Men’s Ice Hockey Championships in 2013, winning the gold medal.

“Connor, Nick, Stephen, and Nelson demonstrate the characteristics I have spoken about so much over the past few months – hard work, determination, and a team-first attitude,” said Oke. “We have set high standards and expectations for our players on and off the ice. I know that all members of the 2013-2014 Petes will support the Captains, ensuring that the high standards and expectations are maintained.”

“Connor has demonstrated all of the qualities of a Captain, including work ethic, a team-first attitude, and the willingness to get better every day,” added Hull. “Nick, Nelson, and Stephen will compliment Connor very well. They are going to be an extension of the coaching staff. These young men exemplify the aforementioned characteristics to fullest degree, and will provide our younger players with great leadership.”