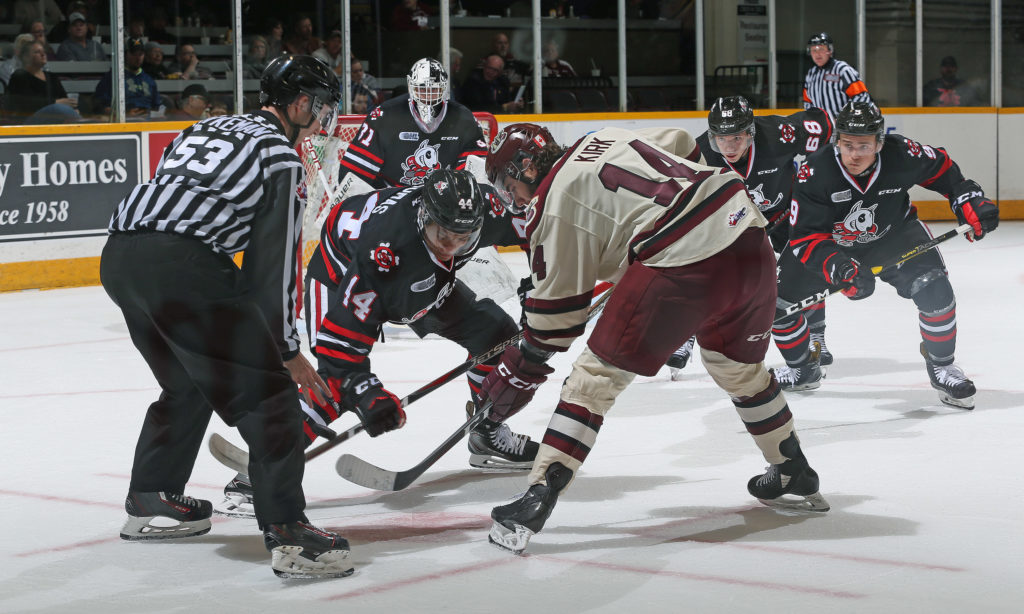 In only their second game on PMC ice this season, the Petes were revved up from a pair of wins and ready to face the Niagara IceDogs. There was a familiar presence behind the bench. although it was the opposite one as Petes alumnus and former head coach Jody Hull returned to the Memorial Centre for the first time as an Associate Coach with Niagara. The Petes hoped to keep their streak alive while also welcoming back newly signed Toronto Maple Leafs forward Semyon Der-Arguchintsev. Peterborough was able to keep their streak alive as they beat Niagara by a score of 5-2, the first time the mighty maroon and white have started a season 3-0 since 2007.

The first period was marked with an early Niagara goal as Matthew Philip slipped one past Hunter Jones with the help of Ben Jones and Edmonton Oilers prospect Kirill Maksimov to give the visitors the first tally on the board.

The home team also planted a point on the board, though, with Brady Hinz scoring his 3rd of the season off a tip from veteran Chris Paquette and Cameron Supryka to tie the first at one a piece.

Following his goal, Hinz was called on a tripping penalty which dropped the Petes to four men, although Niagara also lost a man which put the two teams into a 4-on-4 situation, with neither side able to break the tie before they returned to even strength.

With 5 minutes left in the period the Ice Dogs tacked on yet another goal as  Jones and Philip swapped roles to give Niagara a 2-1 lead. The period wound down with Niagara in charge of the goals 2-1 while the Petes took the shots on goal 12-10.

The first impact to liven up a quiet second period came in the form of the first career OHL goal for Peterborough’s Chad Denault, with an assist by Austin Osmanski to re-tie the score.

The Petes would have to keep the momentum running as they lost Paquette for 2 minutes as the clock dropped to single digits and the hometowners were forced onto a penalty kill, which would prove fruitless as no goals would come for either squad (surprising Petes fans after their team tallied four shorthanded goals on Sunday in Ottawa).

Peterborough would take the lead with 4 minutes left in the middle frame as Liam Kirk took a helper from Zach Gallant to give the Liftlock Lads a single goal lead at 3-2.

GO ON, KIRKY🇬🇧! @kirky_1424 finishes off a feed from @zachgally from behind the goal line to give the Petes their first lead of the night! 3-2 for the good guys!#GoPetesGo pic.twitter.com/NYTjjFiHNv

Kirk’s goal would be the last major moment in the period before the buzzer sounded to end the frame on the Peterborough lead, with the home team holding the shot clock 23-18 as well.

The final period came and went quietly in comparison to the earlier two with the exception of a goal scored by Peterborough defenceman Cole Fraser, with the apple falling to Osmanski to give Peterborough a 4-2 lead.

FRAS! The big rig, @colefraser2, banks one in from his D partner @aosmanski36 to make it 4-2 Petes. Less than 5 to play in regulation. #gopetesgo #ptbo pic.twitter.com/1vqMcbKzcf

That wouldn’t end the Petes opportunities, as with 30 seconds left Chris Paquette would get the puck up the ice from Zach Gallant and Cole Fraser to mark his fifth goal of the season as the Petes took their third victory of the regular season 5 -2 to maintain a clean 3-0-0 record. The win should help the Petes build confidence as they head into their first tilt of the season with Hamilton, the reigning OHL Champs, at home on Saturday night.

PAQ! @Chris_paquette9 gets a huge defensive zone faceoff win, and gives the Petes a 5-2 win with his 5th goal in 3 games after nice hustle from @zachgally & @colefraser2! #gopetesgo #ptbo pic.twitter.com/r1fzVTBRwT

Final shots were 35-28 for Peterborough. Liam Kirk, Ben Jones of the Ice Dogs, and Brady Hinz were named as the first, second, and third stars, respectively, with Chris Paquette taking home hardest Working Player Of The Game honours, and Hunter Jones earning his third ‘W’ of the young season.

The Petes are back in action at the Peterborough Memorial Centre on Saturday September 29 when they host the OHL Champion Hamilton Bulldogs. Tickets for Saturday and all other 2018-19 regular season games are available through the PMC Collins Barrow Box Office in person, online, or by phone at (705) 743-3561. The Season Starter Pack is also still available for fans who want to cheer on the Petes for the best price of the season.