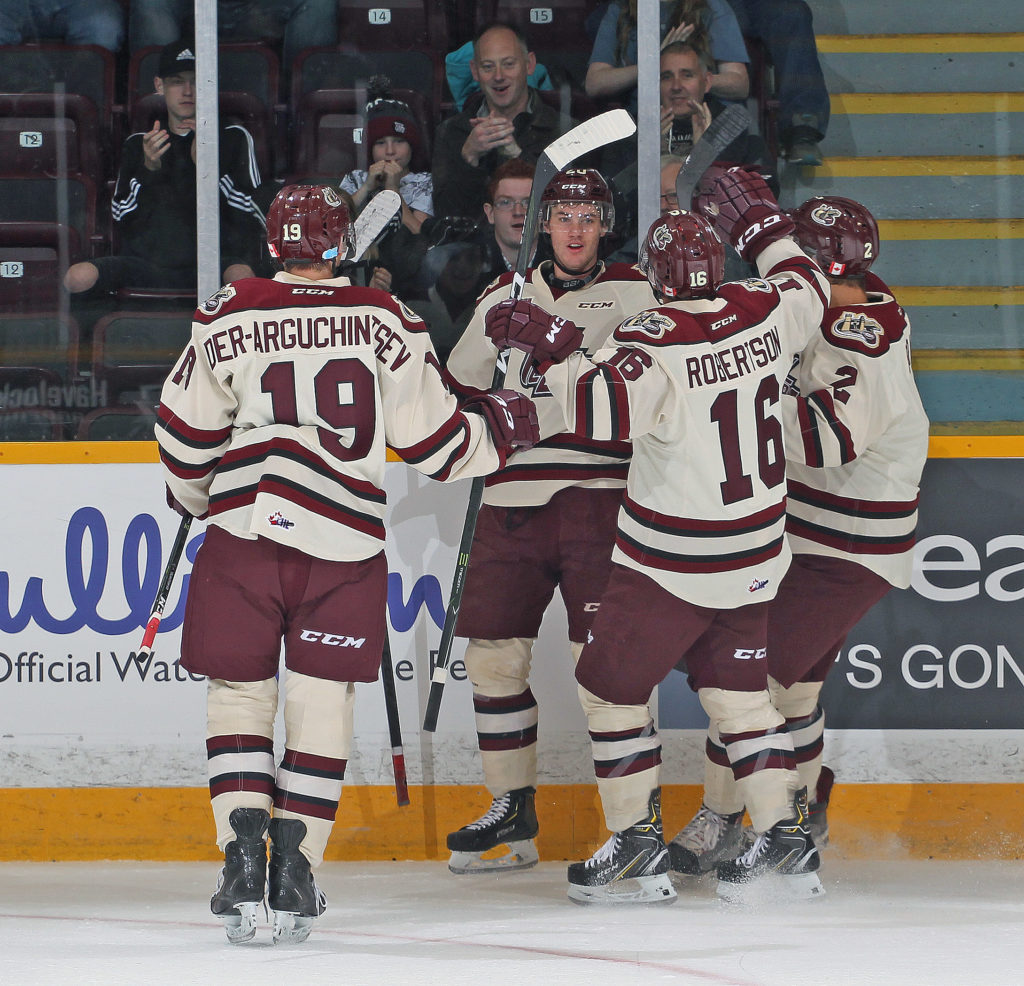 Five Petes had multiple points in a 5-2 victory over the Sudbury Wolves Thursday night, snapping a four game losing skid.

The game would be the first back on PMC ice for forward Nick Robertson who had been sidelined with an injury.

The home team finally claimed the opening point for the first time in five games as Nick Robertson scored his first of the season off a feed from the two starting defencemen Declan Chisholm and Cole Fraser.

With 1:44 left in the first, the Petes extended their lead with a rocket from Chisholm courtesy of Robertson and his fellow forward Semyon Der-Arguchintsev for the second of the night for Peterborough.

CHIZ! After moving the puck to @nickrob2001, @chis_decs gets the puck back and goes roof over McGrath! It's 2-0 Petes!#GoPetesGo pic.twitter.com/1RbNiFsll2

The Petes would end the opening period with a 2-0 lead and a shot clock reading 16-13 in their favour.

Sudbury came back and knocked the Petes’ lead to one in the first minute of the second, as first overall pick Quinton Byfield put the Wolves on the board with help from Owen Robinson to make it 2-1 Peterborough.

At 6:36 the Petes would ensure their lead was undisturbed, as Pavel Gogolev took it upon himself to drive directly towards Jake McGrath and fire the fourth goal of the night unassisted to make it 3-1 in favour of the maroon and white.

The teams would each lose a man towards the end of the frame for respective penalties, although neither side would register a goal in their short 4 on 4 situation. The Petes would once again go to the dressing room with a strong grasp on the lead by 3 goals and the shot clock 29-22.

The final period ticked away with little action until the 10:11 mark when Nick Isaacson, assisted by Gogolev and Fraser, added to the score sheet.

The Wolves would let the home team celebrate only momentarily before Nolan Hutcheson drove in and took a feeder from Blake McConville to slide Sudbury’s second of the night past Hunter Jones, raising the stakes as the score rose to 4-2.

Brady Hinz would score on the empty netter off a pass from Der-Arguchintsev to finish it off at 5 for the Petes.

HINZY!! @BradyHinz pots an insurance tally to give the Petes a 5-2 win on home ice. SDA had the helper. #gopetesgo #ptbo pic.twitter.com/SgXSYxid0e

In the end the Petes would go on to take their first victory in four games at a final score of 5-2.

Robertson, Gogolev, and Hutcheson were named the games first, second and third stars, with Declan Chisholm being named Mark’s Hardest Working Player of the Game.

The Petes hit the road to visit the Owen Sound Attack on Saturday, October 27 at 7:30pm. They’ll be back at the PMC on Thursday, November 1 to once again host the Oshawa Generals at 7:05pm. Tickets for are available through the Collins Barrow Box Office in person, over the phone at (705) 743-3561, and online.