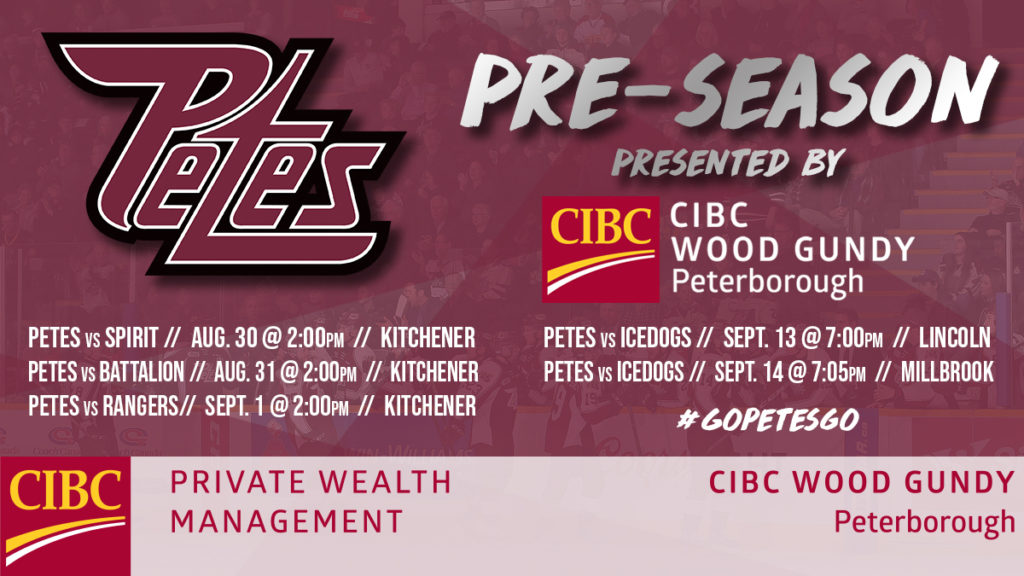 The Petes Pre-Season presented by CIBC Wood Gundy Peterborough is off to a hot start after finishing the annual OHL Pre-Season Showcase with a tournament-best 2-0-1 record.

The Maroon and White earned an 8-5 win over the Saginaw Spirit on Friday afternoon and came back from a 2-0 deficit to overcome the North Bay Battalion 3-2 on Saturday. They closed out the weekend with a 7-6 shootout loss to the Kitchener Rangers in a Sunday matinee.

Sophomore forward Cameron Butler led the Petes and the OHL in scoring in the first weekend of pre-season action with 4 goals, 2 assists, and 6 goals in 3 games. British import Liam Kirk also played at a 2-point per game pace, registering 3 goals, 1 assist, and 4 points in 2 games. Third year centre Nick Robertson had a hat-trick in his only game of the weekend on Friday. Defenceman Declan Chisholm had the club’s most assists with three in two games.

Petes Pre-Season presented by CIBC Wood Gundy Peterborough continues on Friday, September 13 at 7:30pm when the Petes visit the Niagara IceDogs in Lincoln. They’ll face the same IceDogs on Saturday, September 14 at 7:05pm at the new Cavan Monaghan Community Centre in Millbrook.

Single game regular season tickets will go on sale on Friday, September 6 at 9:30am at the PMC Grant Thornton Box office in person, by phone at (705) 743-3561, or online. To view the Petes’ full schedule, click here.