A career in thanks to hockey: Adrian Robertson 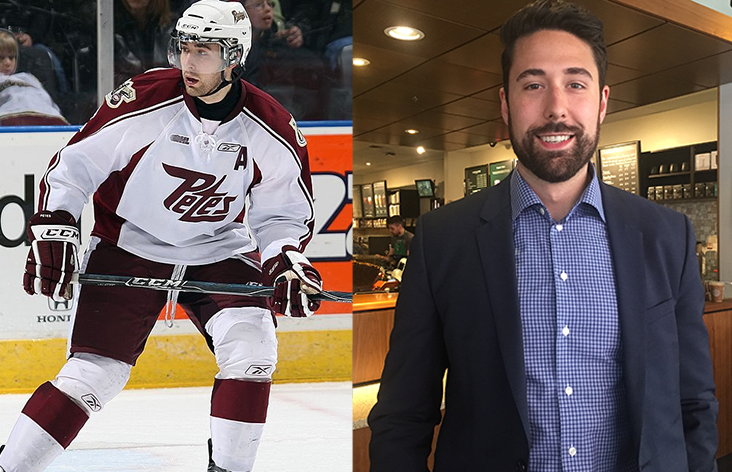 Life after the arena for some elite athletes isn’t always met with a smooth transition, however with the steady support of a former team, the journey of a life after sport can be met with some unexpected opportunities, such is the case with Adrian Robertson.

Robertson was drafted by the Petes in 2007, but didn’t sign a contract with the team until 2008, following a season with the Mississauga Chargers. He began skating full-time with the Petes during the 2008-09 season, a year he categorizes as monumental for his growth.

“It was a great year for me personally both for how I played and how I matured as a person,” explained Robertson.

The 2008-09 season was met with some changes for the Petes, as Ken McRae joined the bench as head coach and Ryan Barnes as assistant coach. Robertson concluded the season with a broken wrist, an injury that continued to plague him as he entered his second year with the maroon and white.

“The people around me like Jeff [Twohey], Ken, and Ryan, they were super supportive as a young person going through a challenging time,” stated Adrian.

It was during his 2009-10 season that Robertson was awarded the role of alternate captain.

“It was the first official chance for me to take on a leadership role.”

As the Mississauga native wrapped up his sophomore year with the Petes, he entered the summer motivated to improve upon his previous season, disheartened by his on-ice performance.

“After year two I was a little bit bitter towards myself; it wasn’t the year I wanted,” affirmed Adrian.

In his first two months back at the Memorial Centre following a grind of summer training, the d-man surprised himself and put more points on the board than he anticipated. However, after 33 games with the Petes in 2010, Robertson received a call to the General Manager’s office for a challenging conversation many junior hockey players face.

“We were set to board the bus to Ottawa and he tells me that I’m traded to Windsor, and I have to pack up my stuff. It was a sad moment; there were two and a half years of friendships I had built.”

Despite his move, Adrian shared his understanding in the Petes’ decision to acquire younger players and build a new roster. In addition to the friendships he developed with teammates like Chris Buonomo, Eric Cornel, Jamie Doornbosch, and Liam Heelis, Adrian is incredibly thankful for the connections he made with people like his billet family – Jeff, Kelly, Jordan, and James White.

“Its kind of crazy when I think about it now that I’m older. They let someone into their home for eight months of the year to live with them. You become so appreciative of what they did,” explained Robertson. “They played such an important role in making me feel comfortable, especially moving away from home, so they had a great influence.”

Adrian capped off his time in the OHL with the Sarnia Sting in 2012, after completing two seasons with the Windsor Spitfires. Following junior hockey, Robertson attended the University of New Brunswick to complete a degree in finance and economics.

School was a priority for the Petes alumnus, and an asset that was instilled in him by both his parents and Twohey.

Going to Peterborough, you are at an impressionable part of your life. I still remember some of my conversations with Jeff Twohey and some of the things he would tell us, that demonstrated how important school was to him as the manager of the team. The constant reinforcement on the importance of education my entire life probably drove me the most to pursue school after the OHL.

Because of its superior academics and nationally renowned men’s hockey program, Robertson found his perfect post-secondary fit at UNB.

“My first year there we won a national championship and it solidified my decision.”

Since Adrian took university courses while playing in the OHL, he fast tracked his undergraduate degree in three and a half years, and faced the reality of life after school quickly.

“I didn’t really have a sense in what I wanted to do but I knew I was ready to start the next chapter.”

The uncertainty of the future was greeted with a life-changing conversation initiated by the younger brother of a UNB teammate.

He introduced me to some people on his Scotiabank team and we kind of stayed in touch. Ultimately when they were hiring, I interviewed, got the job and it’s been three and a half years as part of their investment banking group. I’m super thankful; the only way I would have gotten this job is through my connections in hockey. It’s kind of crazy to think about.

Robertson draws parallels between the business world and that of hockey, comparing the necessary competitive edge required in his career, but distinguishes the difference between the level of relationships between those of coworkers and those with teammates.

All the pieces of Robertson’s career have largely fit into place via hockey and from the influence of people he was introduced to because of the game. The Petes alumnus doesn’t have a ten year plan for his career, but maintains the hockey player mentality: that if he works to be better everyday, he will get to go where he wants to be. He continues to help former hockey players with their transition into the career world, much like the support the Petes and hockey communities provided him.