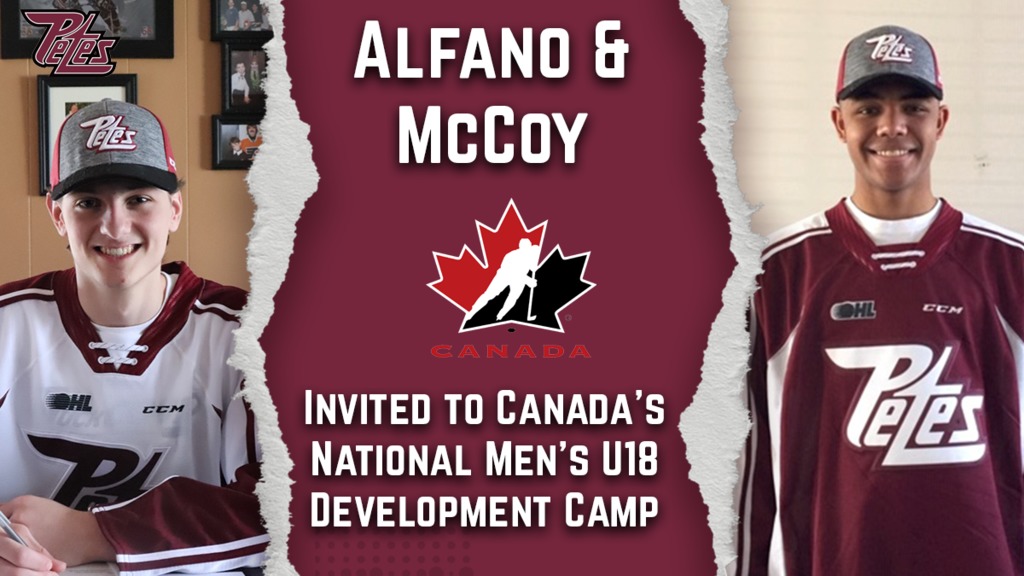 Hockey Canada announced today that Peterborough Petes forward Sam Alfano and defenceman Donovan McCoy have been invited to the National Men’s Under-18 Team summer development camp, set for July 25 – August 4 at the Seven Chiefs Sportsplex on the Tsuut’ina Nation near Calgary.

“It’s special to have a chance to go to Calgary and show everyone the progress I’ve made over the past year and prove myself,” said Alfano, the Petes’ second round pick (23rd overall) in the 2020 OHL Priority Selection. “I’m really excited to hit the ice and have a chance to play for my country.”

“It’s an honour to be invited,” expressed McCoy, the Petes 2020 first round pick (15th overall) in the OHL Priority Selection. “As a kid, you dream of playing in the World Juniors, and being named to the U17 and now U18, it means everything to put on a Canada sweater.”

“This is a great opportunity for these players,” said General Manager, Michael Oke. “It’s always an honour to be recognized and invited to the national camp and represent your country despite the challenges over the past year.”

Despite being limited to a virtual U17 camp in 2020 due to the ongoing COVID-19 pandemic, Alfano and McCoy are expected to hit the ice during the U18 camp.

“This stage of our Summer Showcase is about bringing together the top under-18 players in Canada to work and learn from an elite-level coaching staff, giving them the necessary skills for their hockey development to grow and succeed,” said Alan Millar, director of player personnel for Hockey Canada. “We have an opportunity to connect with the players through on- and off-ice sessions to give them the tools that will only enhance their skill set as they advance through our program and prepare for the upcoming season.”

The Petes will welcome the Sudbury Wolves and first overall draft pick Quentin Musty for their home opener on Thursday, October 14 at 7:05 pm. Tickets are now on sale for the 2021-22 season. For information on season tickets, private suites, special packages, groups, and single game tickets, contact Mike Kosciesza at mkosciesza@gopetesgo.com or call (705) 743-3681 ext. 263.