Avon, Stillman Both Pick up 100th Career Point as Petes run into Penalty Trouble in Oshawa 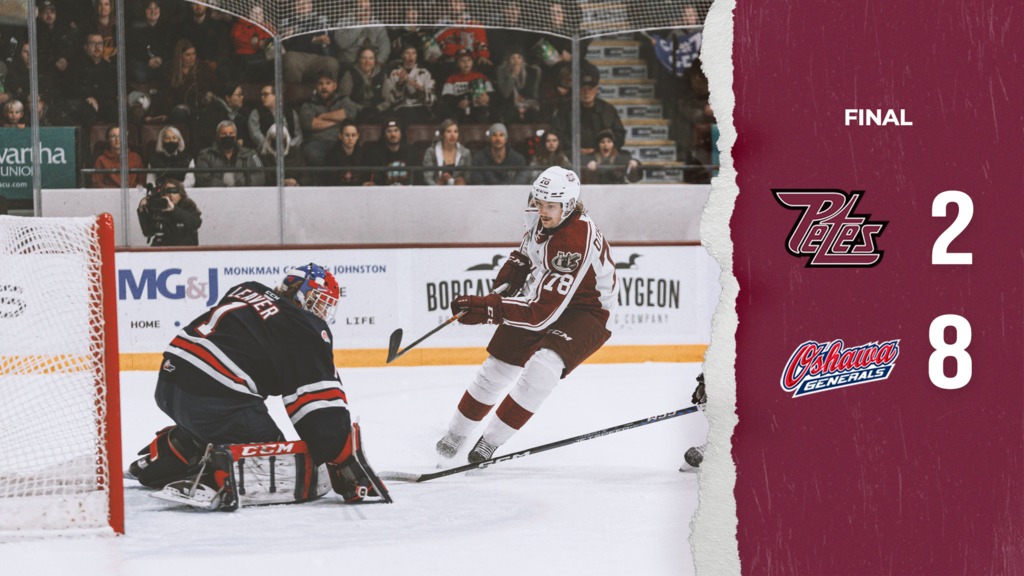 Following a devastating loss against the Sudbury Wolves in which they gave up four unanswered goals, the Petes traveled to Oshawa to take on the rival Generals for the second time in four games. In two meetings so far this season, the Petes outscored the Generals 7-1 on route to a 2-0 record. It would be a night of milestones as Brian Miller would work his 1300th game as a Pete and Chase Stillman and J.R. Avon would both record their 100th career OHL point.

The Petes came on the wrong side of the penalty box early in the period, taking three penalties in the first 10 minutes. Oshawa would capitalize on the Petes slow start nine minutes into the game, when Thomas Stewart scored to give the Generals the lead. The Petes would come right back as under a minute later Nick Lardis would score his 11th of the season to tie the game up at 1-1. Penalty trouble would finally catch up to the Petes, as Brett Harrison would capitalize on a Brennan Othmann penalty to give the Generals a 2-1 lead heading into the break.

The Petes would come out firing in the second period and it would only take 3 minutes for them to tie the game. On a powerplay Brennan Othmann would get the puck to J.R. Avon who then sent it over to Chase Stillman who would score his eighth of the year to make it 2-2. Stillman and Avon would both hit a milestone on the goal, as they would both record their 100th career OHL point. The game would start to really become a Petes, Generals match up after that, with multiple roughing calls going both ways. With under two minutes left in the period, former Pete Cameron Butler scored to once again give the Generals the lead heading into the intermission.

The final frame started out as a nightmare for the Petes, after taking two penalties on the same call to give Oshawa a 5 on 3 two minutes in. Ryan Gagnier would poke home a rebound on the powerplay to extend the Generals lead to 4-2. The Petes would take their 11th penalty of the game at the 10:00 minute mark of the third leading to Calum Ritchie scoring to extend the Generals lead to 5-2. Calum Ritchie, Ryan Gagnier and Kimo Gruber would each add another to give the Generals an 8-2 win.

Nick Lardis and Chase Stillman scored the Petes only goals on the night. J.R. Avon, Brennan Othmann, Konnor Smith and Sahil Panwar each had an assist. Liam Sztuska made 29 saves in the loss.

The Petes next home game is Family Feud Night at the PMC on Saturday, November 26th when they host the Ottawa 67s. This will be the third matchup between the two teams with the season series currently split with each team winning a game. To buy tickets, click here.