When Bob Gainey walks into a room, everyone stands a little taller. Maybe it’s the magnitude of his career, or anomalous calm demeanor. Regardless, his intimidating presence off the bat doesn’t reflect the kindhearted and gentle nature of the Petes alumnus.

Gainey joined the Petes in 1971 as a local player. Although he only spent two years with the junior club before packing a punch in Montreal, he qualifies those years as being some of his most transformative.

“It was a great period for me in my teenage years and in my life. We had good teams, we had a lot of fun.”

It was within the Memorial Centre walls where he felt at home, a place his family and the familiar faces from his childhood could come together as he took to the ice with some of his closest friends.

“My parents would come to the games, and I was still living at home. I was finishing high school, and the previous year I played for the Jr. B team out of the Memorial Centre, so you knew all the ushers; I had an uncle who was an usher in the mid 60s.”

“I didn’t find there was any pressure, it was nice going to the games and knowing a lot of people.”

This historic arena is also where Gainey met his wife Cathy while she served as an ‘usherette’.

Although the former defenceman would go on to meet thousands of people throughout his larger than life career in hockey, the Petes would introduce him to some of his lifelong pals and give him his first insight into the value of these relationships.

Beating the test of time is the friendship between Gainey and fellow Petes alumnus Doug Gibson,  a union that was initiated between the two when their practices were at the Northcrest Arena.

“We started playing together at 7 or 8 years old and we stayed together right through 16 years old and he went ahead and played for the Petes a year before I did, so we have a lifetime friendship.”

In addition to Gibson, Gainey has remained friends with former Pete Doug Jarvis who doubled as his colleague across two decades. The pair reunited as teammates in 1975 until 1982 with the Canadiens, and again in 1990 when he reached out to Jarvis to join the coaching staff of the former Minnesota North Stars when the team relocated to Dallas in 1993. They met up again in Montreal in 2005 when Jarvis took the role of Assistant Coach while Gainey was the General Manager. 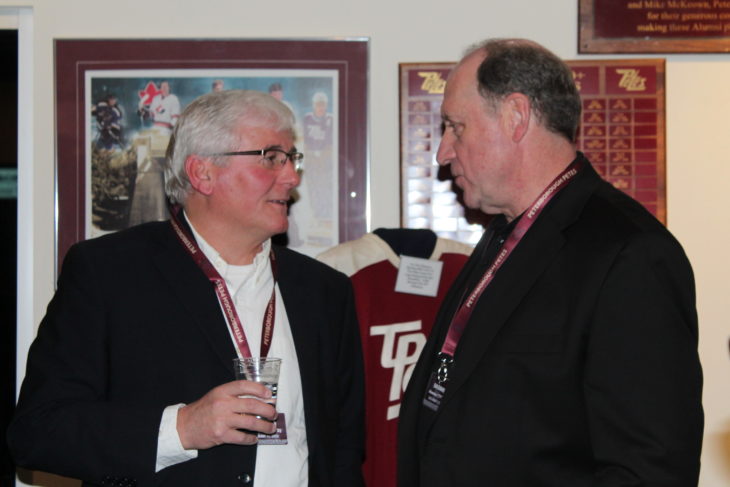 “[A] real nice man, he was a really good player for the Petes. Whether he was playing or coaching, it’s been his whole life. We kind of weave in and out of each others lives at different times between Doug Gibson, Jimmy Johnston, Paul McIntosh. There haven’t been many big gaps that we haven’t been connected in one time or another.”

He also cites Colin Campbell as remaining in his circle because the two pursued careers in professional hockey. Regardless of the frequency of meetups or ways in which lives diverge, Gainey maintains gratitude for the steadfast camaraderie curated with the guys that wore a Petes jersey alongside him.

“When it does happen that we meet it’s a very easy reconnection.”

Who could have predicted this? Not Gainey

“It was a great time of opportunity, and I think in Montreal most people first of all were surprised I was drafted as highly as I was.”

With consultation from Roger Neilson, Gainey decided to head to ‘la Belle Province’, a choice he couldn’t predict would reap such immense success.

“First of all, there was no way I could have had an idea that I would play in Montreal for 15 or 16 years and that we would win championships, and that I would be awarded individual trophies.”

“I think, initially, I wasn’t a strong enough player to say that, ‘I am going to be here for a long time and things are going to get better’.”

Contrary to his humble predictions, Gainey became a marquee player for the red, white and blue and acquired the unofficial title of ‘Le Capitaine’. While with the Habs, Gainey won five Stanley Cups, the Frank J. Selke Trophy for four consecutive seasons from 1971-1981, and the Conn Smythe Trophy in 1979. His impact on the organization was recognized by the NHL when they named him one of the league’s 100 Greatest NHL Players of all time, and although he hung up his skates 30 years ago, hockey Twitter continues to gush over his two-way play. 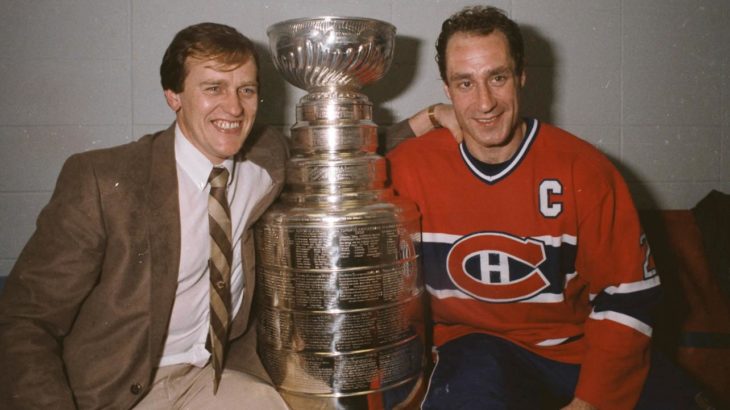 “Before I knew it it has been ten years and the team turned over and I was no longer a younger player, I was an older player.”

“My hockey playing career was in two phases. The first half was about learning, then you start to come down the other side where you’re not as strong physically but you are better mentally, and you remain a solid player until eventually things aren’t working as well. Legs aren’t moving as quickly, muscles aren’t responding as well and before you realize you have reached that spot you are on the off ramp.”

Aside from a place to work, Montreal quickly became the place where the Gainey family called home as his four kids were born and raised there.

“I spent 25 years there, you make contacts, and you make relationships, it was comfortable. I really enjoyed the urban lifestyle, Montreal is a good city.”

He insists despite his tenure living in Quebec his ability to speak french never moved beyond a self-assessed 2.5/10 ranking.

As Gainey’s time with the Habs waned down, he began seeking out opportunities that would allow him and his family to visit Europe.

“European leagues were getting strong and I wasn’t the style of player they were looking to bring in, and I wasn’t coming back to the NHL.”

In 1989 he joined the Epinal Ecureuils (Squirrels) of the French 1B National Division as a Player-Coach, a position that would be the first step on his coaching journey. That spring he received numerous phone calls from executives in the NHL, but one from Bob Clarke, the then-General Manager of the NHL’s expansion Minnesota North Stars, piqued his interest. After flying Gainey overseas to discuss the potential of him stepping up as the organization’s Head Coach, the Petes alumnus decided it was time to take his kids back to North America and seize his knowledge from 16 years of playing hockey.

“It was a great opportunity to stay involved where you know a lot of the different things, where you don’t have to go back to square one to start fresh in a brand new career and there just aren’t that many areas where you could be.” 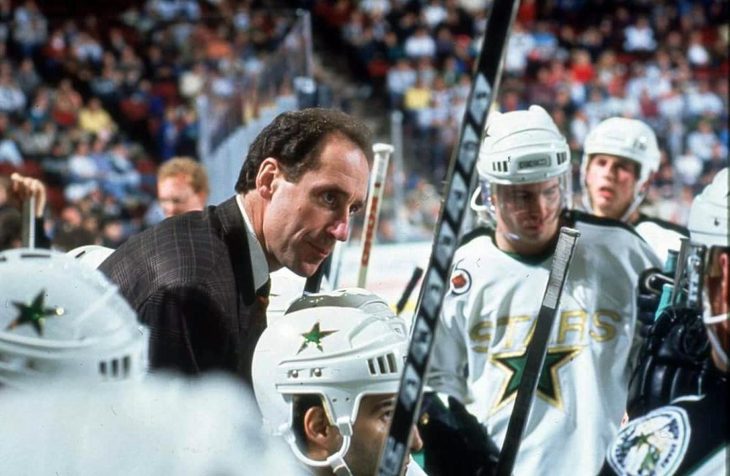 “An MBA in hockey, coaching is a good place to try and take advantage of the work you have put in and knowledge you’ve gained.”

Gainey stepped in as the General Manager of the North Stars in 1992 while being the Head Coach, and saw the franchise relocate to Dallas. In 1996 he stepped down from coaching the Stars to focus on his managerial duties, which eventually paid off as he led Dallas to their first and only Stanley Cup in 1999.

“You find opportunity in chaos and the North Stars were definitely in chaos when I got there. I knew the team, and then the other people who were with me were willing to help me. The three main people were Doug Armstrong, Les Jackson, and Craig Button, so I could continue coaching and I was the manager, but there was a lot of management helping me.”

In 2003 Gainey returned to Montreal as the General Manager of the Canadiens. He stepped in as the team’s interim Head Coach in 2006, then again in 2009. He stayed on as a consultant for the red, white and blue until 2012 when he parted from the team.

Now that his pace of life has slowed down, the name of Gainey’s game is philanthropy and supporting his community.

Gainey was named as a Senior Advisor to the Petes in 2018.

“We formed a charity that is supported really well by the Peterborough and Montreal communities, so we were able to put together a lump sum of money that we are able to draw on. Initially it was geared towards children, environmental issues, and arts, but we have expanded a little bit and we are able to participate in other places.”

The Gainey Foundation is managed by the Petes alumnus and his three children – Anna, Stephen, and Colleen – and is in honour of Gainey’s wife Catherine and daughter Laura. The foundation has supported programs like Students on Ice, Peterborough’s New Canadians Centre, and local art schools.

Most recently Gainey auctioned off 66 pieces of memorabilia on classicauctions.net, raising over $300,000 for charities including the Canadiens Children’s Foundation.

As Gainey recalls his lengthy journey through hockey, he acknowledges that the accomplishments along the way fulfilled his competitive spirit. However, none of it compares to the relationships he’s developed along the way. The opportunity to focus on his family, reminisce with his friends, and giving back is what Gainey plans to do throughout the next chapter.