Born to Coach: Luke Richardson and his Natural Ability to Lead 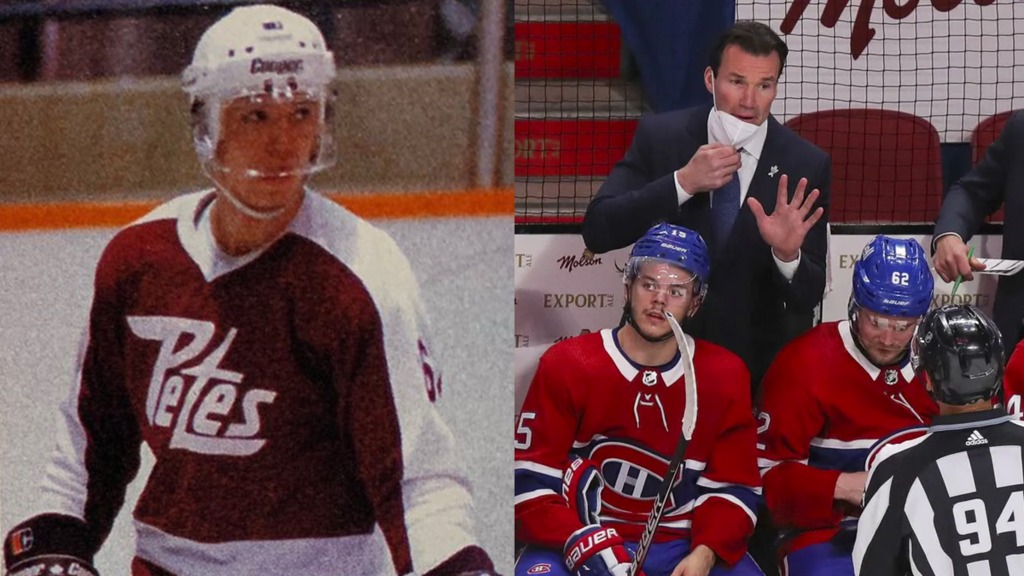 In 2008, Luke Richardson played two games with the Ottawa Senators before trading in his stick and skates for a suit and whiteboard, as an assistant coach. He was a veteran defenceman in the NHL, tallying 1,996 penalty minutes and a reputation for being an effective communicator – a skill the Sens were interested in employing.

Richardson developed into an empathetic sounding board for frustrated players who were otherwise uninterested in the repercussions of venting directly to a head coach. With a fresh perspective and an established role on the Senators’ staff, then-coach Paul MacLean directed him to speak with a player he struggled to resonate with.

Following the morning conversation with Richardson, the player turned around to score two goals that night.

“What did you say to him?” MacLean asked. “Maybe you should the head coach?”

They laughed, and Richardson shared his personal victory with the player: “Hey, you made me look good.”

Luke maintained the blue line for the Petes for two seasons, beginning in 1985, under the direction of Dick Todd and Terry Bovair. He would go on to play 1,417 games in the NHL – stopping in Toronto, Edmonton, Philadelphia, Columbus, Tampa and Ottawa – and made a rapid transition into coaching.

He spent four years as head coach with the Binghamton Senators after his last season with Ottawa, and was hired by the Montreal Canadiens in 2018.

The Ottawa native boasts over 600 games of NHL and AHL coaching experience on his resume.

For Luke, the option to coach came at a time when retirement was looming, while playing for Tampa at the tail end of his playing career.

Tortorella’s bluntness did not include a career capped with time in the farm system, but rather followed with an offer to grow in a new role, briefly lending insight to Luke’s current work.

“He came up to me when I was working out, I was trying to keep myself in top shape and I think he felt bad about it. He said, ‘I love how you played through your career, and I don’t want you to finish your career on a stationary bike. We need you to keep in shape.’ They were pretty well injury-free, which hurt me but for the team, but he said, ‘Would you like to do some coaching responsibilities as you’re waiting to play, I need you mentally ready to go and physically, obviously ready to go if we need you, and in the meantime, we will bring you in the coaches room.'”

When he wasn’t playing, Richardson watched the game from upstairs with a headset on as a goalie coach, returning to the coach’s room in between periods. In preparing for the first round of playoffs coaching staff utilized Luke in understanding the player’s point of view in the development of their booklet assessing the New Jersey Devils.

“That was my first kind of step. I always thought maybe I would coach, but that was my first inkling at it. I enjoyed it, he [Tortorella] always kept me involved,” explained Luke.

The defenceman returned to the ice full time in the nation’s capital – his hometown – following a single season in Tampa. In 2008, the Senators’ general manager approached Richardson with a familiar topic.

“Bryan Murray came up to me and said I want to make some roster moves and I’m sure you don’t want to go down to the rosters and play.”

Richardson’s role(s) among a team came full circle again, as he joined the Senators as a staff member.

“They offered me a position on the coaching staff and I transitioned right away. I think it was the end of November as a seventh defenceman right into assistant coach which wasn’t on the bench, but was on the ice every day at practice.”

In addition to doing video work, Richardson was responsible for the players transitioning from injury back to the ice. It was in this duty that his empathetic comprehension of players began to shine. His unofficial position as ‘player-coach bridge’ transformed from beneficial to indispensable when head coach Paul McLean’s mutual frustration with a player was left in the hands of Richardson. 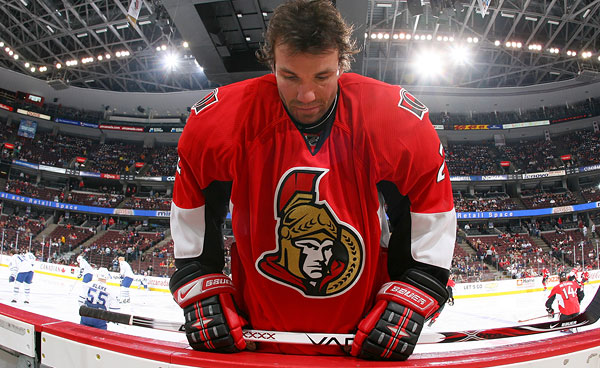 “Paul McLean came in frustrated with a player and I said – well I was inching my way into the coaching duties – would you like me to talk to him? And he said ‘ya.’”

He continued, “I started talking to the player and he started spouting off with me because he was frustrated and he wouldn’t do that with a veteran guy like Paul, I was just an ear to listen.”

He addressed the player in a simultaneous matter of fact, sincere fashion, unique to his character.

Ironically, that evening the player went on to score two goals, leaving McLean and Richardson and the skater with something to laugh about after the game.

Luke asserts that the entire scenario was a coincidence, although most can see beyond his humility. His success with the Senators’ hockey operations largely lies in a rule he set as status quo for the entire organization.

“The one thing I always took pride in was that the coaching staff knew and the players knew that the trust would not be broken either way.”

In 2012, Richardson took over as head coach with the AHL’s Binghamton Senators. He highlights the unique challenges for a farm team, including balancing the age gap, individual skill development, understanding each player’s varying intentions and winning:

You have a thirty year old veteran taking pride in being a captain in the AHL level and also in the back of their mind want that time to go back one more time to the NHL to show they can play there. On the other side is the young guy who is the best player their whole life, never been sat out, its the first time they’re playing pro, its a huge step.

“That’s one thing I pride myself on as a coach, to keep a feel of a heartbeat of what the team and the players feel.”

For Richardson, the evolution of talent from the beginning to the end of the season in the AHL makes the work of a coach uniquely rewarding. 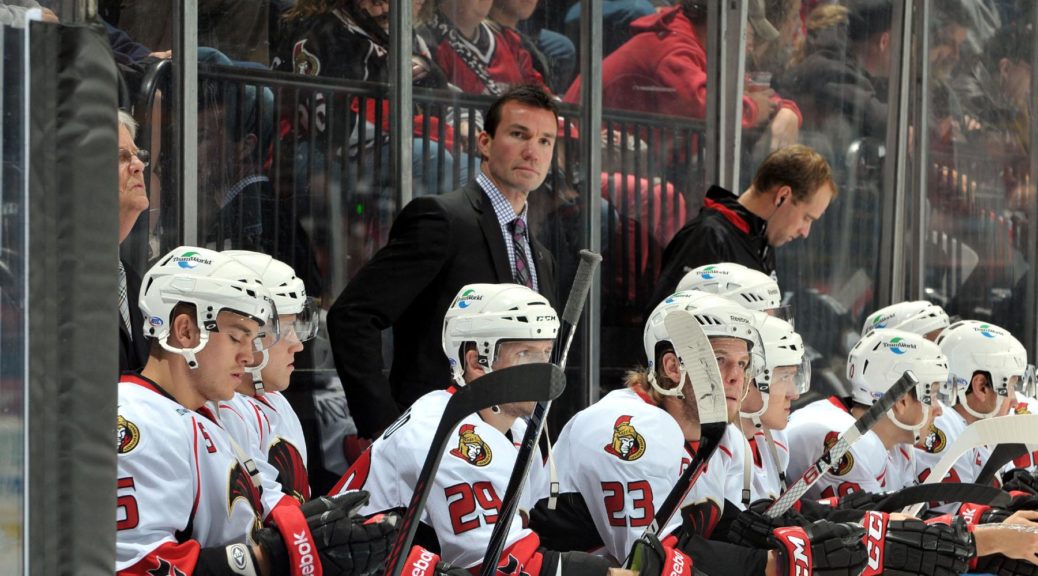 In addition to directly developing the on-ice product, Richardson implements a set of standards that allow his staff and players to preserve synergy.

“That’s one thing I pride myself on as a coach, to keep a feel of a heartbeat of what the team and the players feel.”

He ensures the balance between the comfort of a player to address the coach, and understanding of the coaching hierarchy is present.

“You can have laughs and jokes at certain times whether on the ice, in practice or game but when it’s on the line and the coach says something or needs something, it’s not time to fool around or fluff them off.”

His message of ‘if you want them to listen, you have to listen’ is laced through his coaching philosophy. Richardson’s profound emotional intelligence cannot be fully understood without acknowledging the passing of his youngest daughter, Daron. In 2010, Daron’s life was cut short by mental illness.

In response to the Richardsons’ tragedy, the family developed ‘Do It For Daron‘, a campaign dedicated to raising funds and awareness around youth mental health.

“We are proud the message grows and continues to grow because it’s important. It’s not an easy topic to talk about and we just want to make it a little bit more comfortable for kids who feel alone to step forward and access help,” explained Richardson.

If anyone understands the breadth of how intimate the hockey world it’s Luke, who continues to watch the CWHL, universities like Ryerson, and teams in the OHL and NHL host games supporting DIFD and inspiring conversations around mental health. Furthermore, Richardson claims his former Pete teammate Mike Dagenais (’85-’90) as Daron’s ‘honourary uncle’ and godfather, an accurate portrayal of the hockey community’s familial qualities.

Richardson relishes in the accomplishments of his oldest daughter Morgan, who played for Cornell University while earning an undergraduate degree. Most recently she graduated from Boston University with her master’s in education and currently teaches high school science. Like her father, Richardson describes Morgan as having the ‘coaching bug.’ Her current athleticism and pursuit to be fit is something that inspires him.

“I think if you’re in good shape and can go out there and hop in a skating drill with them conditioning then they respect that you’re there not just blowing a whistle but you’re doing it with them.”

He explains that an old-school method of coaching, “sitting back yelling and barking,” is unlikely to elicit the positive response it once did from players.

It’s apparent Richardson has a gift to connect with people – his resume filled with leadership positions wouldn’t exist otherwise. He’s mastered drawing the delicate line with his colleagues and players between being an authoritative figure or sounding board. The Petes alumnus possesses compassion grounded from an experience most of us will never face. He’s articulate, wise, and has his finger on the pulse of what is required from a coaching staff and players to succeed. Luke Richardson belongs in coaching, and the hockey community needs more coaches like him.