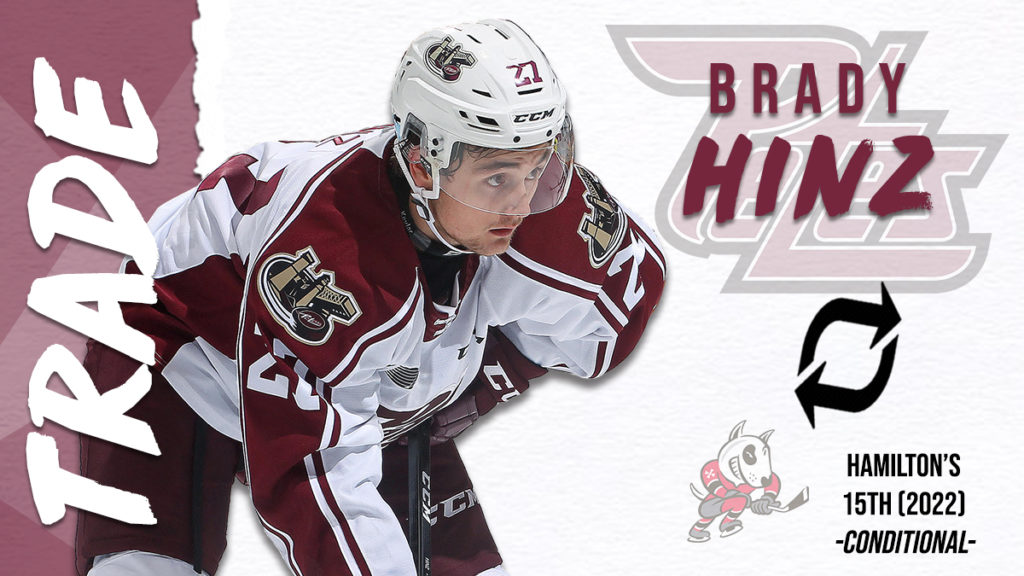 Hinz, a 2000-born right wing, has played 248 OHL games, scoring 54 goals and 75 assists for 129 points through four seasons between the Petes and Sarnia Sting. He has also suited up in 9 playoff games. Hinz is a potential overage player in the 2020-21 season.

The Stratford, Ontario native was acquired by the Petes from Sarnia on January 8, 2018. He was originally selected in the 3rd round, 52nd overall in the 2016 OHL Priority Selection.

“Brady was a valued member of the Petes family for the past three seasons,” added Oke. “We are very appreciative of the effort and skill he brought to our team, as well as the leadership he provided both on and off the ice. On behalf of the entire Petes organization, I’d like to thank Brady and his family for their contributions to the Petes.”

BREAKING: The Petes have acquired Brady Hinz (@BradyHinz) and picks in exchange for Jonathan Ang.

The 2020-21 OHL Regular Season is set to begin on December 1, 2020. Season Ticket Members and Return to Play Flex Pack holders will receive priority access to tickets to attend games this season. All ticket packages can be purchased by emailing the Petes or by calling the Petes Office at 705-743-3681.