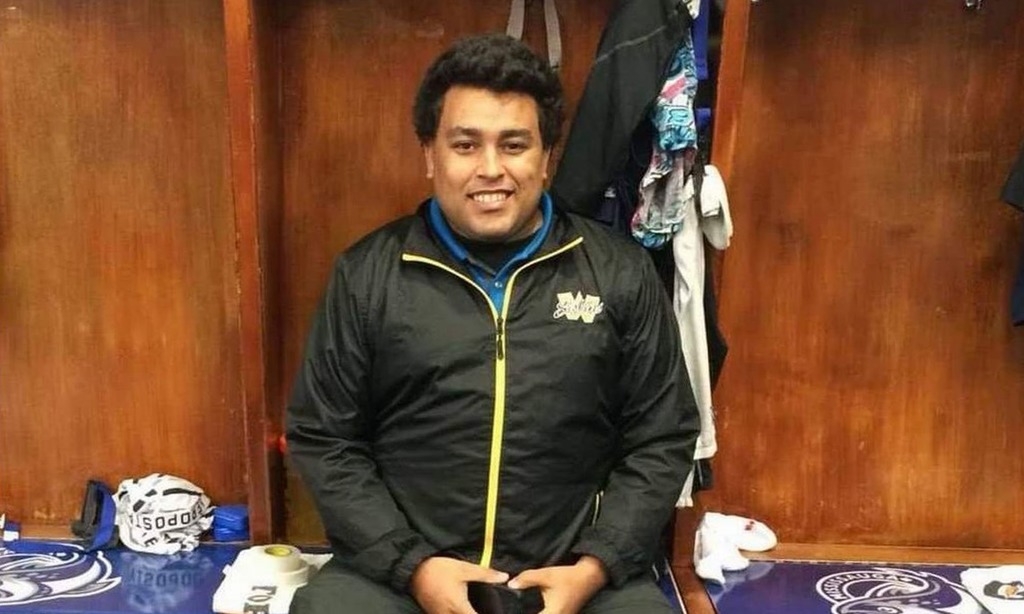 Sport activism manifests itself in different spaces outside the arena, for many it begins with a conversation on social media. This is the digital platform Sebastian Jackson, scout with SMAHT and volunteer with Black Girl Hockey Club, has held the hockey community accountable, in its inclusivity efforts.

Jackson, originally from Chatham, Ontario is a lifetime hockey enthusiast, and like many his relationship with the sport started when he played it as a kid. As he grew up and traded his days of competitive hockey into adult-recreational, he started to assess the game in a variety of new roles.

“I started volunteering, doing ticket sales, writing about the game, and scouting. I took a break from scouting and did a bit of marketing, then I went back to scouting, and then I became an Assistant GM at the JR. C,” says Jackson.

It was through his management of an OHL blog, where the Chatham native developed a friendship with the founder of SMAHT Scouting, an organization that is dedicated to bringing detailed information on top prospects.

“I became friends with him four or five years ago, and we kept in touch. We were messaging, and I sent him scouting reports and I was like I have something to offer, and he was like absolutely.”

In season’s prior, Jackson created scouting reports that covered the OHL and focused largely on the Owen Sound Attack, Kitchener Rangers and the Mississauga Steelheads. Although his initial career goals centred around joining the management side of hockey, today he is focused on making the on-ice sport a safer, more welcoming game for all.

“I always thought, I wanted to be in the management side or the scouting side. I now want to be on the side of hockey that continues to bridge gaps. I want to be one of the people, if teams are building an inclusivity department, who they look at who are going to change the game, who is going to spread the word and they will trust teaching their players. That’s where I want to be now.”

“This game has been incredibly hard, and not accepting to us and I have thought about turning my back on it but I want to be part of something bigger, and that’s part of the brand I’m building now.”

Jackson’s desire and work to transform the culture in hockey is an extremely personal mission, as the SMAHT Scout has been the target of racist abuse from people online.

“Last summer after the George Floyd killing, I have always been very vocal, but the volume of what I was putting out had gotten a lot bigger. I was tweeting my opinions the last year and I had a string of racist dm’s sent to me, and it had me in tears”

“People were sending nooses and saying I don’t matter and ‘I’ll always have to bow to the white man,’ and hockey is never going to accept us.”

When faced with this online violence, Jackson stepped away from social media, and took time to reflect on how he wanted to be involved in hockey. At the precipice of turning away from the game whose community failed to safely support and welcome him, Jackson came across Black Girl Hockey Club.

“I was like you know what I want to help bridge gaps, so I shot Renee [Hess] a message and she shot one back, and within a week we were on a Zoom call.  Within a couple of hours she was like ‘we are going to proceed and have you join,’ and I was like lets ‘get going to change this game.’”

Black Girl Hockey Club was founded in 2018, by Hess. The club’s mission is, “is to inspire and sustain passion for the game of hockey within the Black community, specifically with mothers, sisters, daughters and friends.” Hess and her Board Directors are celebrated for sparking some of the greatest conversations regarding the culture of hockey, holding teams accountable to the inclusivity initiatives they committed to, and reducing the financial barriers to hockey for Black girls and women, through their scholarship program.

Renee or as you may know her as @BlackGirlHockey founded BGHC in 2018 to unite black women in the hockey community.

But she’s done so much more. pic.twitter.com/Bs08yd211T

“I think the one thing that makes it [BGHC] crucial, is Black people have never had the support in the game, the way Renee Hess brings. She has the platform, and there is something about her, she’s probably going to go down as one of the top five most influential people in hockey at some point.”

In addition to Hess’ incredible knowledge of the game, and steadfast leadership at the foundation of BGHC, Jackson points to organizations like the Seattle Kraken and individual influencers in hockey who recognize that a shift is culture is necessary for the sport.

“I think there are a lot of people who knew that this game needed to change and there was a big culture shock.”

As Jackson reflects on what the next steps are in ensuring that hockey is safe and welcoming to all, he hopes to see that more teams -including those in the OHL- adopt departments focused on inclusivity.

“Get an inclusivity department going, hire Women of Colour hire Men of Colour. Get your team, your players, your staff, everybody we are talking about the experiences on the ice and off the ice and experience in life and get them to understand.”

“Players in the system now and teenagers are going to make it a better place and more welcoming for everybody. They all have a better understanding of education and so will tomorrow’s general Manager and coaches and trainers.”

In addition to the implementation of this departmental team, Jackson insists that the support from management groups must be there for their staff and players to feel confident and safe in their positions to speak out against the injustices, in person or on social media.

At the micro-level, Jackson insists that we can all improve in the fight against discrimination in hockey, by speaking out against it and holding those who partake in the abuse online accountable, while supporting and showing solidarity for the victims.

“If you see something wrong you need to speak up, you can’t just stand up to this and not to that. If you said you are one of our friends and you walk with us and you talk to us, listening and learning, where are you?”

Members of the hockey community like Jackson are the reason the culture of the game is evolving. It’s now time for allies to assist in the heavy lifting of eradicating racism from hockey, and make it truly a sport for all.