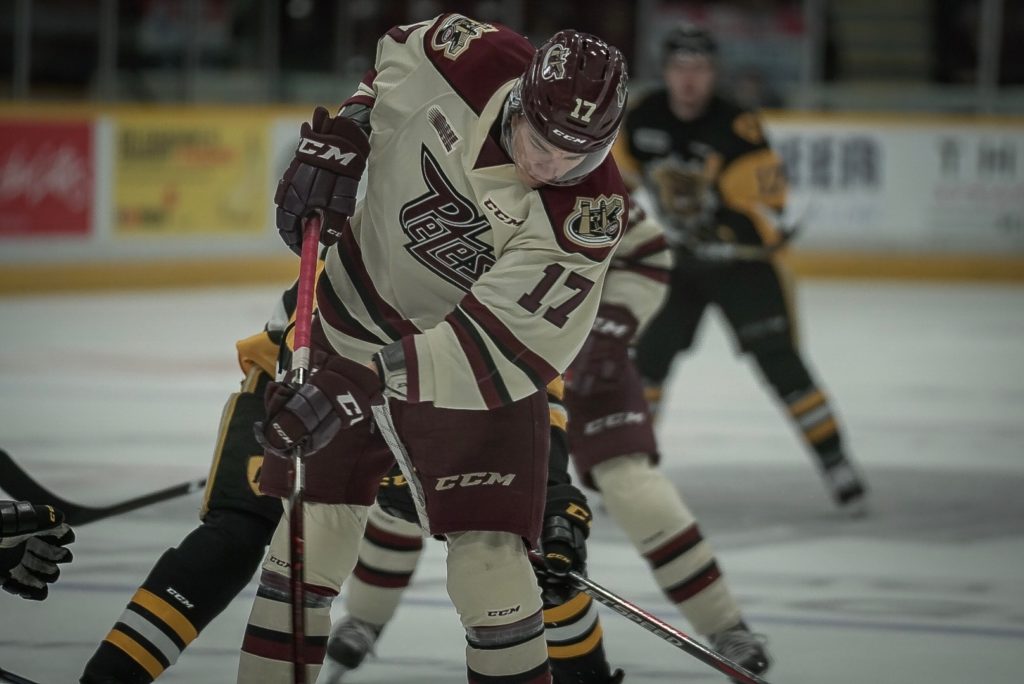 In a pre-turkey tilt, the Petes visited First Ontario Centre for a rematch against the Hamilton Bulldogs on Saturday afternoon. The ‘Dogs handed the Petes their first and only loss of the season seven days earlier,  and after going up 3-0 in the second period, the home team held off the Petes en route to a 3-2 win. Peterborough remains undefeated this season against all non-Hamilton teams.

The first period moved at a slow pace, with starters Jones and Nick Donofrio confidently clearing aside timid shots from their respective opponents. Peterborough had the period’s two powerplay opportunities, but couldn’t find a groove with sniper Nick Robertson still nursing an injured wrist.

Peterborough built some late momentum with several well-executed plays to create scoring chances, but the score was locked at zero after the opening twenty, with the Petes up 13-11 in shots.

P1 in the books, but we’ve got a couple of eggs on the board vs @BulldogsOHL. Confident finish to the period by the Petes, but the first goal will have to wait. #gopetesgo #hamont pic.twitter.com/zqTftsZSmu

The second frame started the way the first ended, with the electric city kids pressuring Donofrio and the Bulldogs, without lighting the lamp. It would be Avery Hayes who finally found the back of the net, pocketing his first OHL goal from league point-leaders Arthur Kaliyev and Brandon Saigeon.

Hamilton doubled their lead late in the period, with Tim Fleischer tapping in an inch-perfect pass from Peterborough-native Josh Wainman and Zachary Jackson. The Bulldogs weren’t done in the second, as Saigeon scored on the powerplay at 17:38 from Matt Strome and Kaliyev.

The second period ended with a whole lot of rough stuff, with Petes captain Zach Gallant looking to spark his squad. The ‘Dogs were up 3-0 and 26-21 after forty.

Hamilton strikes for three in the second, and lead by a treble. 4-on-4 hockey coming up in the third, with things getting a little nasty in the Steeltown. #gopetesgo pic.twitter.com/5gTFRRTIjj

Gallant’s energy found itself on defenceman Matt McNamara’s stick early in the third, who blasted a long slapshot past Donofrio to make it 3-1 for the homers, drawing assists from Chris Paquette and Austin Osmanski.

The Petes’ momentum continued to work with rookie Cam Butler scoring yet another nice goal. The big man showed off his hands to make it 3-2, with assists to Cole Fraser and Declan Chisholm.

The comeback fell just short, as the Petes couldn’t fill the cage with an extra man, losing 3-2.

Saigeon, Kaliyev, and Hayes were the first, second, and third stars, respectively. The final shots on goal were 35-30 for the Bulldogs.

The mighty maroon and white will host two home games next weekend, first taking on the Erie Otters on Thursday before the inaugural alumni homecoming game featuring the Memorial Cup-winning 1979 Petes team. Tickets are available as follows: