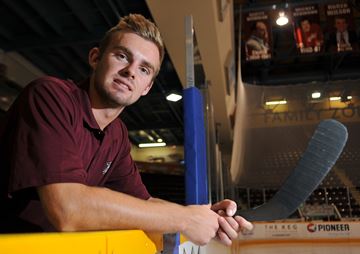 After going the majority of the 2014-15 season and its first two games this year without a designated captain, the Petes have finally found their man.

Fourth-year centreman Eric Cornel will wear the “C” this season, as GM Mike Oke presented the six-foot-two centreman with the honour earlier this week.

This is a big year for the storied franchise as the maroon-and-white celebrates its 60th season, and for Cornel it’s an honour to lead the team. Reality is just sinking in.

“Getting the chance to lead these guys is incredible. I’m really fortunate, to be lucky enough to be the captain,” he says. “A lot of guys don’t get that opportunity so I’m going to going to make the most of it.”

Cornel knows with wearing the “C” on his sweater, comes with some extra scrutiny but he welcomes it.

“Sure there’s pressure but I’m not going to let it get to me,” he says. “I’m just going to go out there and treat it like any other season and do the little things off the ice to help make this team better.”

It’s those little things that got him where he is today, like being the hardest worker in practice and pushing himself off the ice and in the gym, while also being an ambassador for the team in the community.

All those little things added up and made Cornel the obvious obvious pick for head coach Jody Hull, but the new captain knows he’s not alone either.

The Petes have designated two assistant captains for home and away games, naming Josh Maguire, Hunter Garlent (who will both be a voice in the room) along with Cameron Lizotte and Matt Spencer as assistant captains.