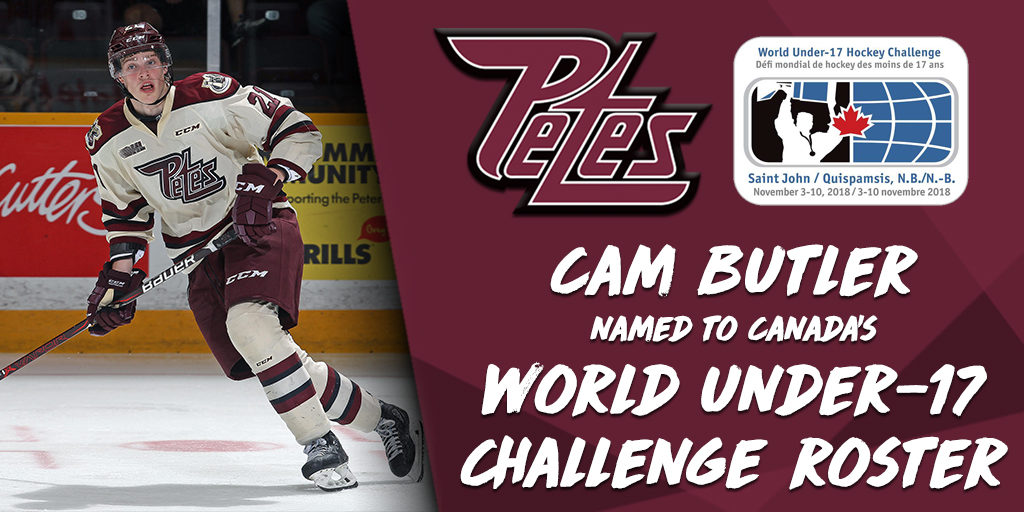 Hockey Canada announced today that Peterborough Petes forward Cameron Butler has been named to its 66-player roster selected to represent Canada at the World Under-17 Hockey Challenge, set for Nov. 3-10 in Saint John and Quispamsis, N.B.

Butler was selected by the Petes in the second round, 27th overall in the 2018 OHL Priority Selection. In 10 games this season, Butler has scored 4 goals and earned 1 assist for 5 points.

The 66 players will be divided into three teams – Team Canada Black, Team Canada Red, and Team Canada White – and will compete against the Czech Republic, Finland, Russia, Sweden and the United States in their quest for a gold medal.

“Any time you bring together the best young players in the country there are bound to be difficult decisions when selecting players, and we feel the 66 young men we chose exemplify the core values of the Program of Excellence,” said McEwen. “We believe that these players possess a willingness to learn and grow as they progress through our program and represent Canada, and give us the best chance to compete for a gold medal this November.”

The tournament opens Saturday, Nov. 3 at the qplex in Quispamsis when Finland takes on Sweden at 3:30 p.m. AT, followed by Team Canada Red, silver-medallist last year, facing off against Russia at 7:30 p.m. AT. The United States will kick off the action at Harbour Station in Saint John on Sunday, Nov. 4 when it plays the Czech Republic at 12 p.m. AT, followed by an all-Canadian match-up between Team Canada Black and Team Canada White at 4 p.m. AT.

TSN and RDS, the official broadcasters for Hockey Canada, will air both semifinals on Friday, Nov. 9, as well as the bronze- and gold-medal games on Saturday, Nov. 10; please check local listings for details.

For more information on the 2018 World Under-17 Hockey Challenge, please visit HockeyCanada.ca.

Enter the code ButlerUnder17 in the Lansdowne Place My Rewards section of the Petes app to earn loyalty reward points.

Butler and the Petes are back in action this Thursday, October 18 at 7:05pm when they host the rival Oshawa Generals. Tickets are available at the PMC Collins Barrow Box Office in-person, online, or over the phone at (705) 743-3561.