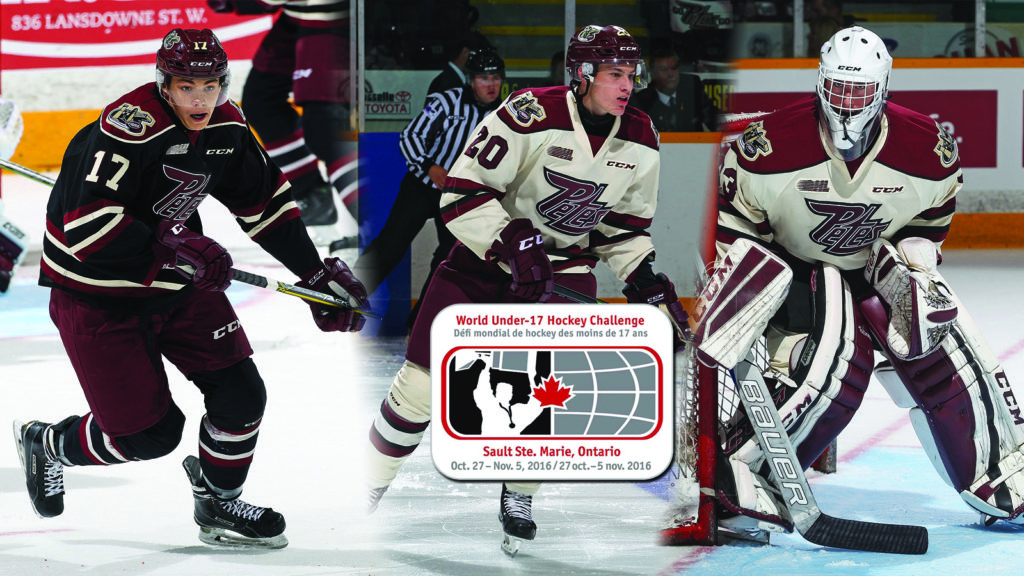 SAULT STE. MARIE, Ont. – It was a week of steady growth and improvement for Team Canada Black, and it is headed home from the 2016 World Under-17 Hockey Challenge with a hard-earned silver medal. Petes rookies Declan Chisholm and Hunter Jones were part of the Canada Black roster. Fellow 2000-born Pete Pavel Gogolev earned a bronze medal with Team Russia.

Team Canada Black’s lone goal came late in the first period from Eli Zummack (Spokane Chiefs), assisted by team captain Ty Smith (Spokane Chiefs) and Calen Addison (Lethbridge Hurricanes). Sweden tied it up in the second, and the Canadians weren’t able to make up a goal after the Swedes went ahead by one in the third on a power-play goal.

“We went through our process – we stuck to everything that we tried to do on a daily basis, ever since we came here a couple weeks ago to the Soo, and overall the kids really left it on the ice,” said Team Canada Black head coach Paul Boutilier of his team’s progress through the tournament. “We’re proud of the effort. Every player in there gave it their all. The Soo was fantastic – the people, our volunteers, the whole group. Our local committee here did a real good job. We were proud to come here and we experienced a real great hockey town.”

“We played a great game, all around. We played the way we wanted. Our coaches coached us the right way and I think we executed pretty well,” said Smith. “[Sweden] got a good goal in the third on the power play, and I think we just needed to capitalize a little more on our chances. We had chances to tie the game up or even take the lead a little earlier on, and we even had that power play in the third, but it just didn’t go for us.”