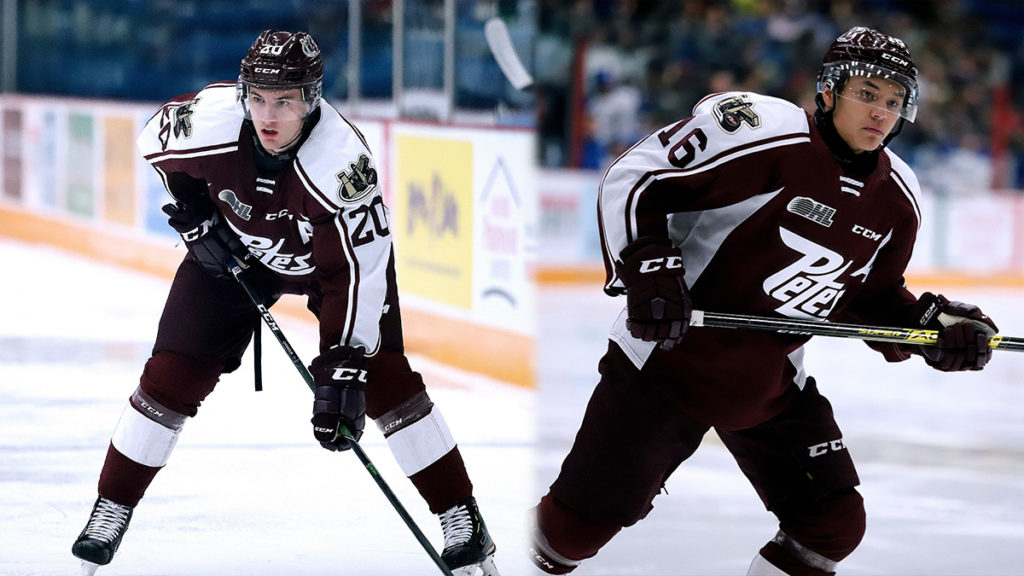 The Petes finish their extended road trip with a 4-2-0-0 record after falling 6-2 to the Firebirds in Flint on Saturday night.

Contrary to their last three contests, Peterborough’s opponent opened scoring. With the Petes struggling to move the puck out of their zone, Ethan Keppen worked the puck out of the corner to Brennan Othmann. A quick pass to the blue line resulted in a Dennis Busby point shot that found its way past Hunter Jones.

The score was evened quickly thanks to Declan Chisholm just 1:14 later, extending his point streak to 8 games. The league’s top play-making defenceman tallied his first of the season from the top of the slot after taking a centering pass from Semyon Der-Arguchintsev.

CHIS! @chis_decs evens things up with his first of the season after a point shot trickles past Popovich! 1-1!#GoPetesGo pic.twitter.com/RTihDvrjBj

The maroon and white were in a familiar place, tied after 20 minutes of play for the fifth time in nine games.

Going to go ahead and point out that your Petes are 4-0-0-0 when tied after the first frame 😁#GoPetesGo pic.twitter.com/T0d7YCu1TD

Three straight markers from the Firebirds left the Petes with some catching up to do.

As early as Flint scored in the opening frame, they did it even faster in the second. Port Perry native Ty Dellandrea notched his third of the season 33 seconds after hitting the ice for the middle stanza, restoring his team’s one goal lead with a spinning backhand shot.

Cody Morgan increased Flint’s lead to 3-1 at 9:14 after getting in behind Jones to tuck a fluttering puck into the net, with Evan vierling and Busby assisting.

A delay of game call against Jones kept the ice tilted in Flint’s favour, and although the Petes successfully killed of the penalty, Jack Phibbs further widened his club’s lead by sneaking the puck between just inside Jones’ right goal post at 13:22.

With Flint ahead 4-1, Tye Austin replaced Jones in Peterborough’s crease.

On Peterborough’s second man advantage of the night, Zach Gallant tipped a Nick Robertson wrist shot past Popovich to make a dent in Flint’s now two goal lead. Chisholm added to his defencemen leading assist total with his 12th of the year, while Robertson’s assist lengthened his point streak to 9 games.

Flint’s fifth of the game and fourth of the period came courtesy of Othmann who was found at the back door by Morgan and Vladislav Kolyachonok.

The Petes were in tough after 40 minutes, trailing 5-2 in the final game of their extended road trip.

We’ve got some work to do in the third…#GoPetesGo pic.twitter.com/yWAhscJPsn

Flint capped off their 6-2 victory with a tally by Braeden Kressler at 15:38 of the third, beating Austin point-blank.

Peterborough finishes 9 road games with a 6-3-0-0 record to start the season. They’ll return to the Lift Lock City for their home opener on Thursday, October 17 at 7:05 against the Hamilton Bulldogs. Catch the Petes in early season action on home ice with a Season Starter Pack and save over $65 on tickets and merchandise by clicking here.