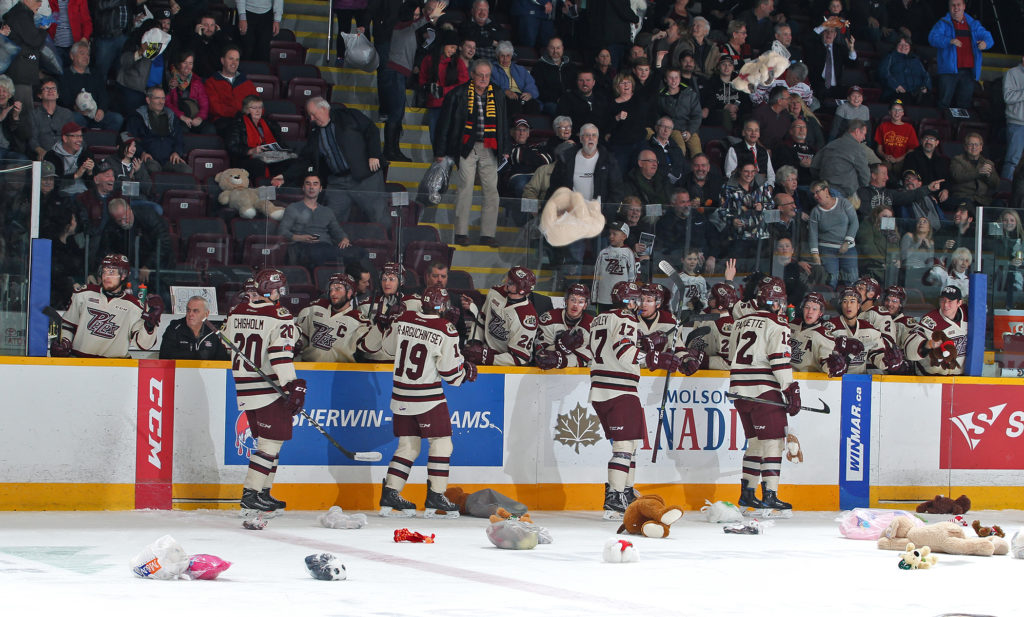 On Thursday night, the Petes played their second game in two weeks against the Sudbury Wolves, kicking off December against the blueshirts at the Peterborough Memorial Centre for the annual Teddy Bear Toss game.

Despite teddy bears raining down after an early Chris Paquette goal, Thursday’s story looked like it would be written by Kirill Nizhnikov. The 2018 NHL Draft-eligible winger was acquired by the Wolves on Thursday morning, and led his new team with a goal and two assists that same night.

The Petes earned the result they wanted, though, coming back from 4-2 down in the third period to win 5-4 on a Jonathan Ang overtime goal – breaking a 12-game losing streak when trailing after two periods.

Fans only had to wait seven minutes to get (or give) what they came for, as Tampa Bay Lightning prospect Paquette beat Mario Culina in the top corner for the Petes’ first goal, prompting fans to toss 1,440 stuffed toys, as well as 138 gloves, toques, scarves and earmuffs, onto the ice. A further $109.05 was donated in support of the Salvation Army Miracle Toy Drive.

Paquette’s powerplay goal, which was assisted by Declan Chisholm, was answered by Dmitry Sokolov’s 16th tally of the season, with assists going to Cole Candella, and the newest Wolf: Kirill Nizhnikov. Nizhnikov was acquired from the Barrie Colts early on Thursday morning.

Peterborough weathered an early-December flurry of penalties, keeping the score tied at 1-1 despite a 13-9 shot lead for the visitors after the opening frame.

Sudbury’s 14th shot didn’t come until five minutes into the middle period, but that shot off the lumber of Dawson Baker (assisted by Blake Murray) was all Sudbury needed to go up 2-1. Meanwhile, Culina was settling into a rhythm, turning aside several good chances from the high-flying Petes, including a shorthanded breakaway from Canadian World Junior hopeful Jonathan Ang.

The Petes would eventually tie the game after Zach Gallant placed a long behind-the-back pass on a tee for Nikita Korostelev. The overager buried the puck low left side, also assisted by Austin Osmanski.

Sudbury answered quickly and with force, though, as Michael Pezzetta scored from Nizhnikov, and then the former Colt netted his first as a Wolf, from ZackDe Malik and Troy Lajeunesse, with 7.4 seconds to play in the period. After 40 minutes, the Wolves held a 4-2 lead.

Peterborough’s record when trailing after two periods was 0-12-0-0, while the Wolves were 7-1-1-0 when taking a lead into the final frame.

The electric city kids were determined to shake up that statistic, applying constant pressure in the third period. Paquette had the best chance for the homers, but couldn’t bury a loose puck early in the period.

A four-minute penalty looked like it may stall Peterborough’s momentum in the middle of the third, but after killing the first two minutes and drawing a Wolves penalty, the Petes pulled back within one with a Zach Gallant rebound goal, finishing a play from Korostelev and Alex Black at 10:14.

Peterborough tied the game just over a minute later as Paquette buried his second of the night, this time shorthanded, after being sent in on a partial breakaway by captain Logan DeNoble.

The Eastern Conference rivals battled it out in the final minutes of the third, with Culina making one more cross-crease save on Paquette, forcing overtime.

Michael Pezzetta put the Petes up a man after running into Dylan Wells, and with the 4-on-3 powerplay, Jonathan Ang gave the Petes their first overtime come-from-behind win of the season.

The Mary Brown’s Chicken & Taters first, second, and third stars of the game were Chris Paquette, Kirill Nizhnikov, and Zach Gallant, respectively, while Matyas Svoboda was named the hardest working player of the game. The final shots on goal were 28-28. 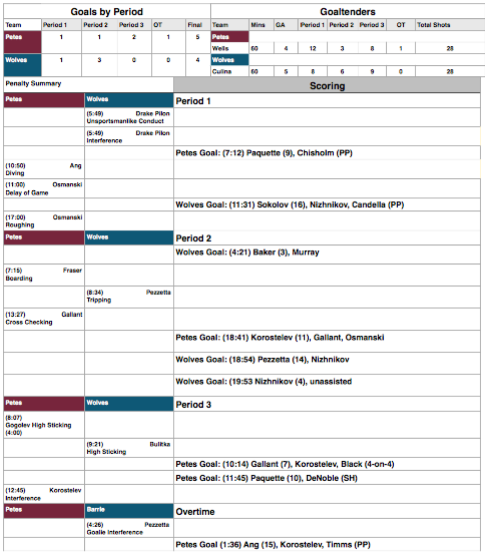 The Petes will hit the road and travel to southwestern Ontario to face the Knights in London on Friday, December 8 at 7:30pm, and to Sarnia to take on the Sting on Saturday, December 9 at 7:05pm. The Petes will play their final home game before Christmas on Thursday, December 14 at 7:05pm against the Ottawa 67’s. Game tickets are available starting at $8 through the Collins Barrow PMC Box Office, online or, by phone at (705) 743-3561.

Looking for the perfect holiday gift for the hockey fan in your life? Petes Holiday Flex Packs are now on sale! Receive four regular bowl flex vouchers to be used between December 30 and January 20, as well as two Petes rocks glasses for just $59.99, a savings of over 40%. Don’t forget to download the free Petes Mobile App, available for iPhone or Android devices.

Need a holiday gift for the Petes fan in your life? A Petes Holiday Flex Pack is for them! 4 tickets + 2 Petes rocks glasses, plus a chance to win a suite night courtesy of Gibson’s Finest Canadian Whisky! DETAILS>> https://t.co/jsOBechtN9pic.twitter.com/cmZf7IPe6l