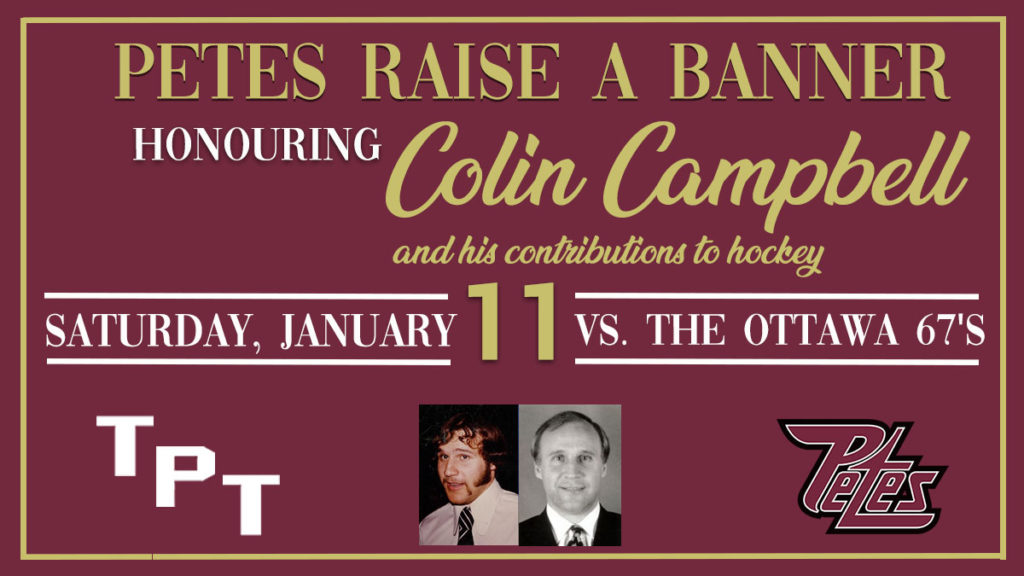 On Saturday, January 11, 2020, hockey legend and Petes alumnus Colin Campbell will be honoured with a pre-game banner raising ceremony at the Peterborough Memorial Centre before the Petes battle the rival Ottawa 67’s.

Campbell, who played for the Petes from 1970-73, went on to an NHL playing career spanning 636 games before spending over a decade as an Assistant and Head Coach with the Detroit Red Wings and New York Rangers. He won the J. Ross Robertson Trophy in 1972 with the Petes, and a Stanley Cup as Assistant Coach with the Rangers in 1994 alongside fellow Petes alumni Dick Todd and Mike Keenan.

“The Petes are excited to finally recognize Mr. Campbell with a place of honour at the PMC alongside several other hockey legends,” commented Shelbi Kilcollins, the Petes Manager of Social Impact, Growth, and Alumni Relations. “There are many Petes alumni deserving of this recognition, but Mr. Campbell’s dedication to hockey, and his continued support of the Petes and the Peterborough community, deserve special acknowledgement.”

Campbell currently works as the Senior Executive Vice President of Hockey Operations for the NHL. He has served in various capacities in the NHL executive suite since 1998.

Along with Campbell, several dignitaries will be on hand as part of the pre-game ceremony, including other Petes and NHL legends. The ceremony will include several speeches, a video tribute, a special presentation from the Petes Board of Directors, and the banner raising.

The Petes will wear special T.P.T. Throwback jerseys during the January 11 game. The replica jerseys pay homage to those worn by the Petes from 1970-72. Game-worn jerseys will be available to fans in an online auction following the game, with all proceeds supporting Saves 4 CF, the charity partner of the game on January 11.

Fans will also be able to purchase limited edition T.P.T. replica jersey t-shirts from the Petes Store at the PMC, and online at store.gopetesgo.com, prior to the game.

This event, along with several other alumni initiatives taking place throughout the season, is being presented in part by Gibson’s Finest Canadian Whiskey, who are continuous supporters of the Petes Alumni Relations Program.

Tickets for this game and all regular season home games are available through the PMC Grant Thornton Box Office in person and over the phone at (705) 743-3561 Monday to Friday from 9:30am to 5:00pm, and 24 hours a day online.