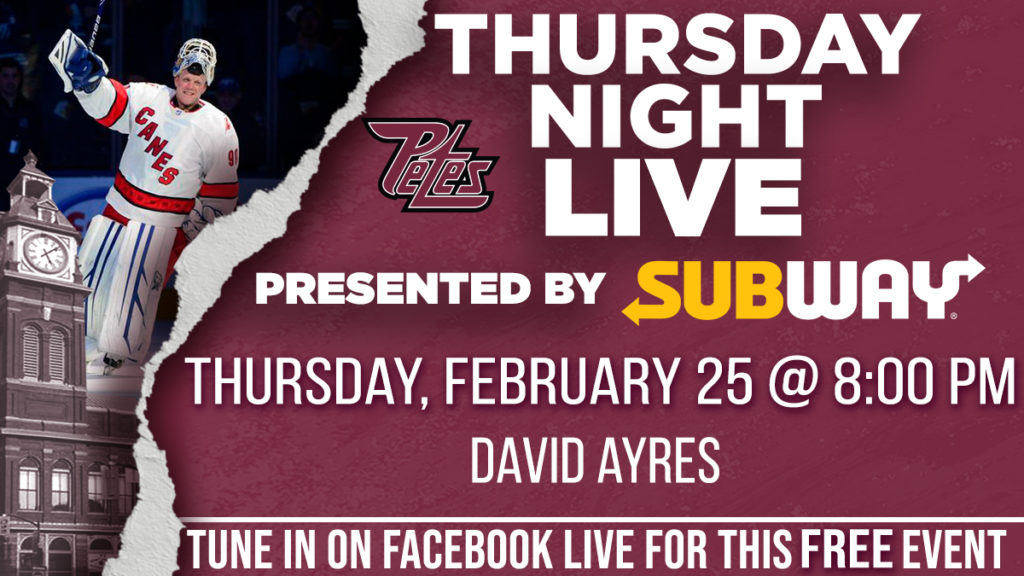 David Ayres, the first emergency backup goalie to win an NHL game, is this week’s special guest on Thursday Night Live (TNL) presented by Subway. TNL will air on February 25 at 8:00 pm on the Petes Facebook page.

Ayres became a household name when he stopped all eight shots throughout 28:41 minutes of action on Saturday, February 22, 2020, at the Scotiabank Arena, to help the Hurricanes defeat the Toronto Maple Leafs 6-3. The Zamboni driver, who doubles as the Leafs practice goalie will discuss his experience playing against his colleagues and how it has impacted his life over the past year.

In the celebration of Black History Month, the Petes will recognize Tony McKegney who played 13 seasons in the NHL and became the first Black player to score 40 goals in a season. In a video tribute during the second intermission, the Petes will showcase his playing career.

Throughout the second intermission, Petes alumnus and current netminder for the Iowa Wild, Hunter Jones, will be singing a cover of Lego House by Ed Sheeran. Fans can catch more of Jones’ musical talent by going to his Youtube channel, Hunter Jones Music.