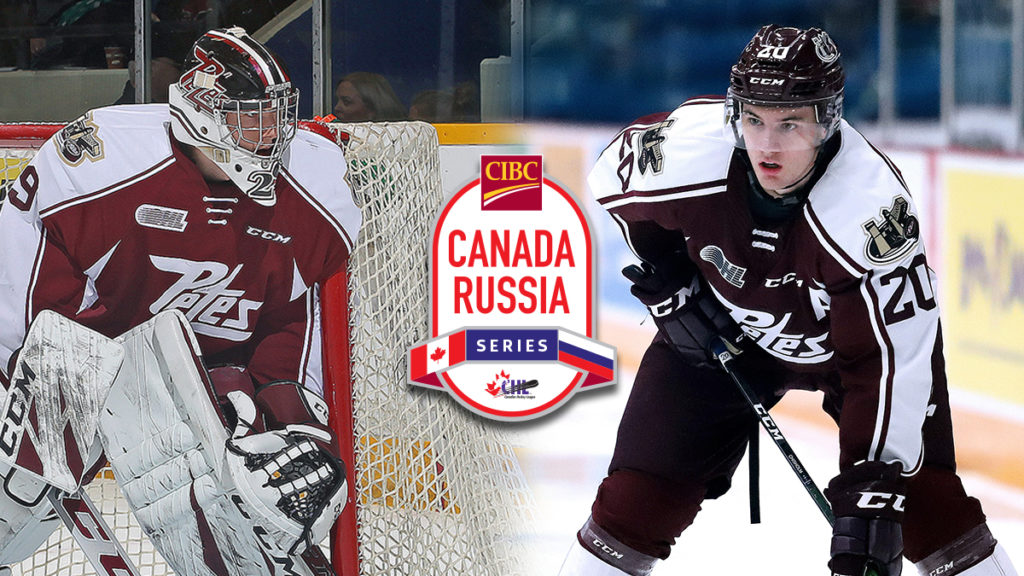 The Ontario Hockey League, in collaboration with the Canadian Hockey League and Hockey Canada, announced today the rosters for Team OHL, which will compete against Team Russia in the 2019 CIBC Canada Russia Series. Petes defenceman Declan Chisholm and goaltender Hunter Jones will compete in the annual series for the second consecutive year.

Jones will suit up for Game 3 in Kitchener, while Chisholm will play in Game 4 in London.

A total of 25 players have been selected to represent the OHL in the 2019 CIBC Canada Russia Series including 15 players who will compete in both Ontario games.  The rosters feature 20 players who have been selected in the NHL Draft. Four players who are first time eligible for the NHL Draft in 2020 have also been named to the roster including forwards Quinton Byfield of the Sudbury Wolves and Cole Perfetti of the Saginaw Spirit along with defencemen Jamie Drysdale of the Erie Otters and Ryan O’Rourke of the Soo Greyhounds.

In 16 years of competition against the Russian National Junior Team, the OHL has a record of 25-6-1 in this series following a 3-1 win in Sarnia and a 4-0 loss in Oshawa last season.

The 2019 CIBC Canada Russia Series is supported by title sponsor CIBC, and associate sponsors Kia Canada, Cooper Tires, and Kubota Canada.  All games will be broadcast nationally on Sportsnet and TVA Sports.

The 2019 CIBC Canada Russia Series is supported by title sponsor CIBC, and associate sponsors Kia Canada, Cooper Tires, and Kubota Canada.  All games will be broadcast nationally on Sportsnet and TVA Sports.

For event information including full rosters and how to purchase tickets please visit http://chlcanadarussia.ca.

Chisholm, Jones, and the Petes are finally in action on home ice on Thursday, October 17 at 7:05pm when they host the Hamilton Bulldogs in their 2019-20 Home Opener. Tickets are available at the PMC Grant Thornton Box Office in-person, online, or over the phone at (705) 743-3561.