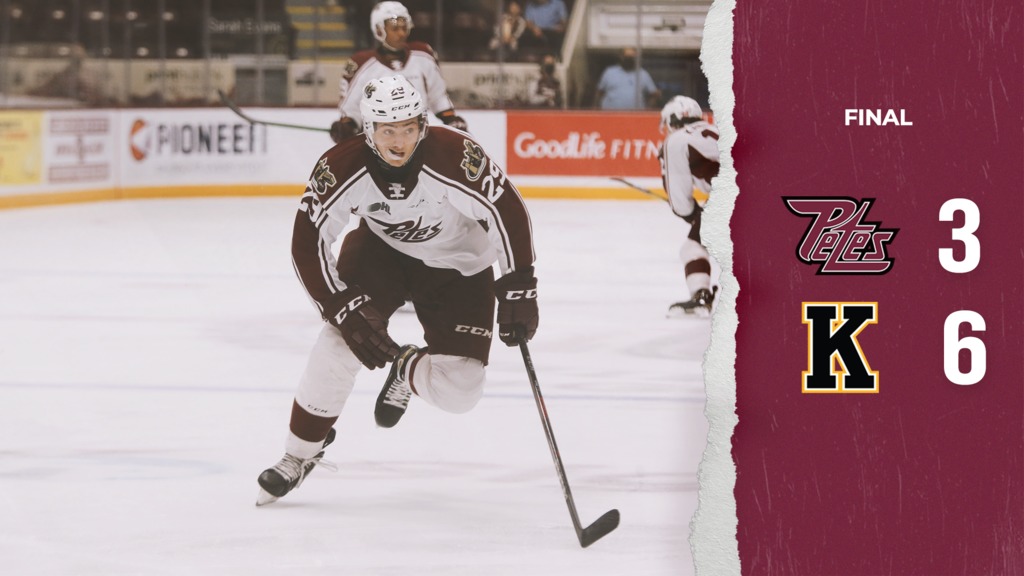 First place Kingston Frontenacs netted four unanswered goals in the second period to skate to a 6-3 victory against the Peterborough Petes on Saturday night at the Leon’s Centre. Kaspars Ziemins scored two goals 41 seconds apart while Samuel Mayer and James Guo picked up two assists each, and Tucker Robertson picked up a goal and assist.

From the moment the official dropped the puck, Peterborough came out ready to play, generating a ton of offence and opportunities. The Petes kept the Frontenacs busy in their own end, which ultimately to numerous scoring chances, but Frontenacs’ starter Aiden Spooner kept his eyes on the puck.

Finding opportunities and taking advantage of them. That’s exactly what the maroon and white did when they pressured Kingston to force a turnover in their end. Mayer picked up the loose puck, made a cross-ice pass to Guo who rifled the shot towards the net, but it was Tucker Robertson who deflected it to open the scoring. He picked up his second goal of the preseason.

Tucker deflects Guo’s shot from the point to give us a 1-0 lead early in the game! @Samuel6Mayer picks up the secondary helper on the goal!#GoPetesGo | #GameON pic.twitter.com/xLdA7mmMCx

Riga, Latvia native Kaspars Ziemiens continues to find comfort on American size ice since his arrival on Sept. 8. Much like the Petes first goal, Guo fired the puck to Mayer, and #2 completed a slap pass to Ziemins, who deflected the puck past Spooner to give the Petes a 2-1 lead.

Latvian native Kaspars Ziemins deflects @Samuel6Mayer‘s slap-pass on the PP to give the good guys a 2-1 lead! Guo picks up the secondary assist!#GoPetesGo | #GameON pic.twitter.com/WJuoyX35QI

Just over 40 seconds later, Robertson won the faceoff cleanly in Kingston’s zone, Keegan McMullen wristed the loose puck on net and Ziemins sneaked away from an enemy and backhanded the biscuit to suddenly give the Petes a 3-1 lead heading into the first intermission.

MAKE THAT TWO FOR ZIEMINS 🚨

Kaspars picks up @McMulley17‘s rebound and fires the biscuit past Aiden Spooner to give us a 3-1 lead!#GoPetesGo | #GameON pic.twitter.com/fDA7kdGmcG

The second period was a different story for the Petes. Just 24 seconds into the frame, Wight put one past Austin, which ultimately turned the momentum around in favour of the Frontenacs. Throughout the period, the Fronts scored three quick ones to give them a cushion 5-3 lead. In addition to Wright’s tally, Kingston saw goals from Ethan Ritchie, Lucas Edmonds and Norwood native, Jackson Stewart.

As the period winded down, the Petes had a few opportunities to convert on the man advantage, but the Frontenacs continued to play strong defensively against the struggling Petes power play.

Glad that period is over 😰

Plenty of time to turn things around in the final 20! #GoPetesGo | #GameON pic.twitter.com/TEJGSVJU8c

It was a quiet third period in terms of adding names to the scoresheet. Peterborough’s penalty killers killed off a 5-3 and four-minute infraction to keep the game close. Each team continued to fire pucks and generate scoring opportunities, where Kingston light the goal lamp for the sixth and final time of the game before 60 minutes was completed.

Finals shots were 35-26 in favour of Kingston. Edmonds, Frasca and Thibodeau were named the game’s first, second and third stars.

The Petes look to bounce back next Friday, October 1 against the Sarnia Sting at 7:00 pm.