Developing the next wave of on ice talent: Justin Soryal 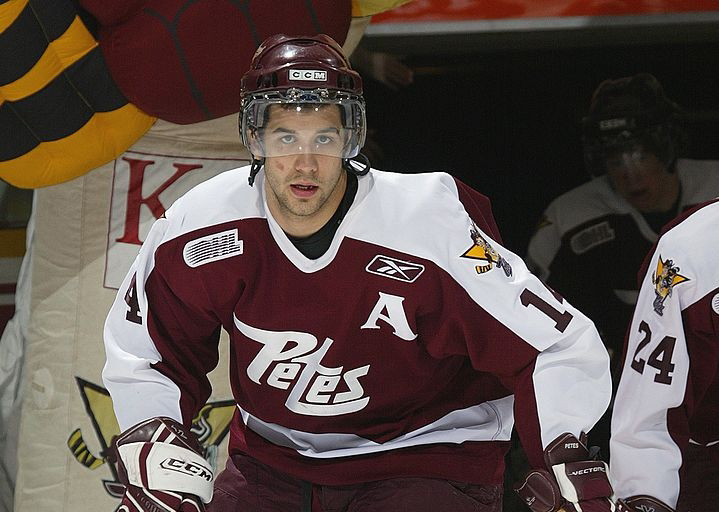 “It was a dream come true. They were one of the big names in the Ontario Hockey League.”

Justin Soryal reflects on his initial thoughts when called by the Peterborough Petes in the 2004 OHL Priority Selection. The Newmarket native played four seasons for the maroon and white, and was a member of the franchise’s most recent J. Ross Robertson championship team (2006). In the Memorial Centre the left winger made his mark as a large, gritty player few opponents would want to square up against.

“We were very talented, but we were tough. It changed the element and the way we were as a team. We were physical, we were finishing our checks, it was part of our success.”

In addition to the physical resilience that strung the second millennium Petes together, Soryal believes the strength in the leadership of the 2006 squad laid the foundation for a successful season.

“It was a special group, a special time and I think a lot of that credit lies with Jeff Twohey and the guys scouting for putting together a phenomenal group. Great leadership, just helped along in the process, there were great role models.”

He cites guys like Jamie Tardif and Mark Flood for their mentorship in the dressing room that led to the group’s connection and confidence on the ice. In 2008, Soryal signed an entry level contract with the New York Rangers, and played three seasons with their AHL affiliate, the Hartford Wolfpack.

“It was a whirlwind, you go from being a kid where everything is more structured to being an adult and you have to take care of yourself and you’re living on your own.”

From 2011-2013 Soryal wrapped up his playing career with the Charlotte Checkers, an organization and sport-centric city he reveled in, “it doesn’t get much better than to get to play and live in a place like Charlotte, North Carolina.”

Although the Petes alumnus’ career was capped due to an injury in 2013, he has yet to venture far from the rink. Soryal currently coaches the U16 and U14 New Hampshire Avalanche and maintains the position as the organization’s Youth Director, managing the preparation of coaches and experience of players.

“I oversee the program from the little guys coming in the door and the first time putting their skates on, all the way through that major midget age group.”

As a coach, he largely focuses on the age groups seeking out opportunities beyond their local team, and his passion lies in helping bridge the gap between players and their dreams. Although Soryal pursued the OHL following his time with the York-Simcoe Express – something most Canadian hockey players aspire toward – his coaching now revolves around on preparing kids for NCAA Division I schools.

“For us it’s a very different system here, these kids are trying to be Division I, NCAA college athletes, which is a very difficult task; there are only 61 D1 schools and there are obviously kids from Canada, US, international that try to make it.”

“If you are able to get a scholarship and get part of the tuition knocked off, it’s a life changing event.”

The former Pete notes that the goal is to develop the players at critical ages where they can absorb enormous amounts of on-ice information. He admits that since his time going through the minor system that hockey has dramatically evolved.

“It’s skill based and speed based, there are a lot of different elements that were not a part of the game 15-20 years ago that you need for the next level now.”

To provide further support for New England youth athletes, Soryal opened a strength and conditioning facility: Roots Athletic Development Centre. Although the creation of the space was out of a desire to help hockey players in the way Soryal’s off-ice coaches had, since its inauguration it has branched into providing training for sports like football and baseball.

“When I was that age it was just starting when people were realizing that you have to work out and everyone was trying to figure out what to do. I know in my performance just how much that made a difference.”

For Soryal, he doesn’t measure the results of his work in the athletes’ weight or reps but rather how well he sets them up for a secure and bright future.

Soryal is a perfect match with New Hampshire minor hockey. He has provided the resources and mentorship learned from his time in Peterborough and throughout professional hockey to propel kids towards their own athletic dreams. Soryal is a perfect example of how playing well can transform into doing good.