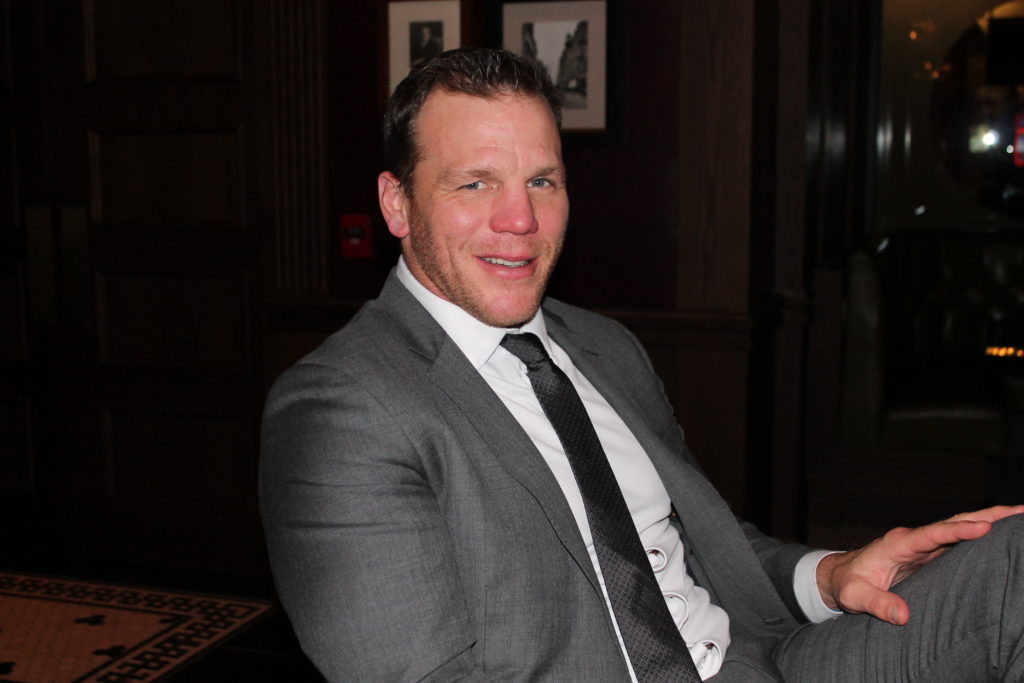 “I am the worst player on every team I’ve ever played on.”

Shawn Thornton sits in a steakhouse at Springfield’s MGM casino, sips on a glass of red wine alongside his friend and head of his foundation, Tom Timlin, and forthrightly assesses his playing career. He peeks up at the restaurant’s TV, glancing at highlights from the 2019 NHL All-Star Game and laughs at the prospect of him participating in a shootout. Teetering on a line of humility and self deprecation, Thornton ponders on his career earnestly without taking himself too seriously.

The retired enforcer was selected by the AHL, in addition to fellow Petes alumnus Rob Murray, to serve as an honourary captain at the 2019 AHL All-Star Game.

The role was a perfect fit for Thornton: a New England favourite since his time with Boston, and one of only four players to play at least 600 games in the AHL and 700 in the NHL. Throughout the weekend the Petes alumnus is consistently stopped by fans walking to and at the events with requests for autographs, photos, and chats, making time for everyone who approaches him.

At six feet, Thornton isn’t particularly tall for the leagues he played in. However, his ‘rugby-esque’ stature, in combination with his facial scars, makes the Oshawa native easily recognizable and his gracious presence unforgettable to fans. 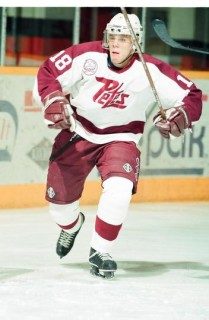 Before a long term career in professional hockey, Thornton dressed for the maroon and white from 1995-97. He compliments the goaltending of Zac Bierk, the team’s on-ice systems, and the closeness of the group as reasons for their statistical success. Of his former teammates Shawn remains close with Petes left winger Dave Duerden, talking to him once a month and crashing on his basement couch when he comes home.

Predicting much of his future career, Thornton’s time with the Petes was born out of a demonstration of grit. Previous Petes General Manager Jeff Twohey spotted Shawn at a tournament in Gatineau, Quebec in a game between the Montreal and Oshawa Major Midgets:

Montreal, if I remember right, scored a goal and went by the bench and kind of milked the goal and taunted the bench. I can’t remember if Shawn was on the bench or on the ice, but he grabbed the guy and beat the snot out of him. At the time, and I happened to be sitting beside his mother at the time, she was a little bit animated in the fight. I looked at her and said, ‘Kid looks like he knows what he’s doing,’ and she said, ‘he’s never been beat’.”

Jeff went on to add Thornton to his draft list and took him in the ninth round of the OHL Priority Selection, a risk that saw its immediate return.

“He almost had a veteran presence to him as a rookie, he wasn’t a one dimensional guy, he played hard,” Twohey recalled. “He had the character and the presence and passion to want to play. You don’t win without guys like him. He removed all fear from my team.”

Thornton felt a mutual appreciation for Twohey stating, “As an individual, Jeff took a lot of stock in me as a person, not just a player. He just helped me out, he was a person I could just go talk to, he was great.”

Directly shaping Shawn on the ice were coaches Brian Drumm and Dave McQueen.

“Dave was really good at putting me in situations for me to succeed. Being an enforcer in that role, especially being a young kid in that role, he helped guide me through that, so did Drummy.”

While with the Petes Thornton was drafted 190th overall in the 1997 NHL Entry Draft by the Toronto Maple Leafs. He would go on to spend ten years in the AHL, playing with the St. John’s Maple Leafs, Norfolk Admirals, and Portland Pirates.

He cracked a permanent position on the Anaheim Ducks roster in their 2006-2007 season alongside Petes alumnus Chris Pronger and won a Stanley Cup. In July 2007 Thornton signed a three year contract with the Boston Bruins that would see a four year extension and the attainment of his second Stanley Cup in 2011 – a championship that was largely attributed to his surge in energy.  Shawn wrapped up his playing career after three seasons with the Florida Panthers, switching departments and stepping into the role of Vice President of Business Operations.

Although his most devout fan base remains in Boston, the enforcer’s collection of enthusiasts exists across the hockey community.

“I think people draw to the underdog a little bit. My ties to the community, I thought it was important. I thi 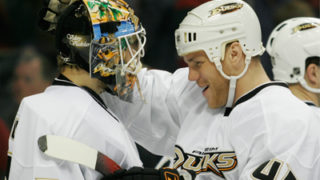 nk when people see that you’re giving back they tend to have more of an emotional connection rather than a player that skates around. I like people. I always try to give everyone the time of day.”

He follows up stating, “I wasn’t afraid to get punched in the face for my teammates,” a characteristic that makes any athlete well-liked among their colleagues, although drawing intense repercussions as well.

It’s a job I signed up for and I’m quite comfortable doing, but there are some tough moments. You miss some naps, you miss some nights sleep knowing you have to do it [fighting] the next day. The thought of the unknown is probably the worst thing. I made a great living doing it so I’m not going to complain about it, but there were definitely some sleepless nights not knowing who was going to punch me in the face the next day.

Thornton admits physically meeting his match against Derek Boogaard and John Scott, largely because of their upper hand in size and reach. Additionally, he cites teammates Patrice Bergeron and Brad Marchand as some of his toughest competitors.

“They’re guys you just can’t take the puck away from, you’re going to lose the battle and I tried to pride myself on that too, but I wasn’t skilled enough to win every battle. I think those guys, every single puck battle is life or death for them.” 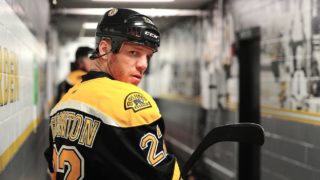 Atop two Stanley Cups and walking behind flag bearer Bobby Orr into the Fenway Park Winter Classic, Shawn’s proudest moments lay in his presentation of resiliency and work in his teams’ communities.

“Being able to start my own foundation and to use my platform to be a player that could give back, I take a lot of pride in it,” describes Thornton.

Shawn’s tenacity is best summarized by his career stats in his continuous push to clinch an enduring position in the NHL. In allowing the dream to continue, even when he appeared to be a permanent fixture in the AHL, he explains, “I took a deep dive and looked at my life and wanted to work on the things I needed to improve upon and I put an effort into it to try and take it to the next level and it ended up working out for me. It happened a little later than I would have liked, it but it did work out.”

Since stepping off the ice Shawn hasn’t left the rink. He currently oversees the Florida Panthers’ marketing, PR, game presentation, foundation, community relations, and broadcasting teams, a role he was eager to step into since his time with the Bruins. 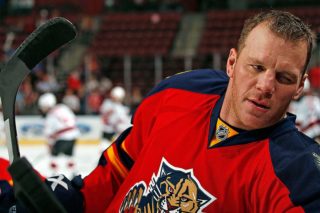 “I always wanted to switch over to the business side of things. I didn’t think I’d have an opportunity, to be completely honest – as a player in Boston I’d go sit in the office after practice. I was always interested in the business side of sports my last couple of years.”

In the pursuit of crushing more naysayers and those who associate fighters with neanderthals, Shawn pulls on his web of connections to help overcome challenges in his new position.

“I rely on my network a lot. I’m very aware that I don’t know anything about anything. Matt Chmura from the Bruins and Sarah McKenna of the Boston Red Sox. I rely on a lot of people when I don’t have the answers. I reach out to other strong, older organizations.”

Thornton certainly doesn’t mind playing the long game in pursuit of his goals. Shawn’s determination in proving people wrong has laid the foundation for his success, and his lighthearted, humble nature has made him someone the public admires and desires to know.

The Petes alumnus ends the conversation answering how he hopes to be remembered. In typical fashion, blending humour and sincerity while making a slight dig at himself, Shawn states, “I’m hoping it’s how much I gave back, the game’s a game – I loved it. It’s a great sport, it treats me really well. I’m hoping in forty years when my name comes up – it probably won’t – that someone is talking about how much I cared.”