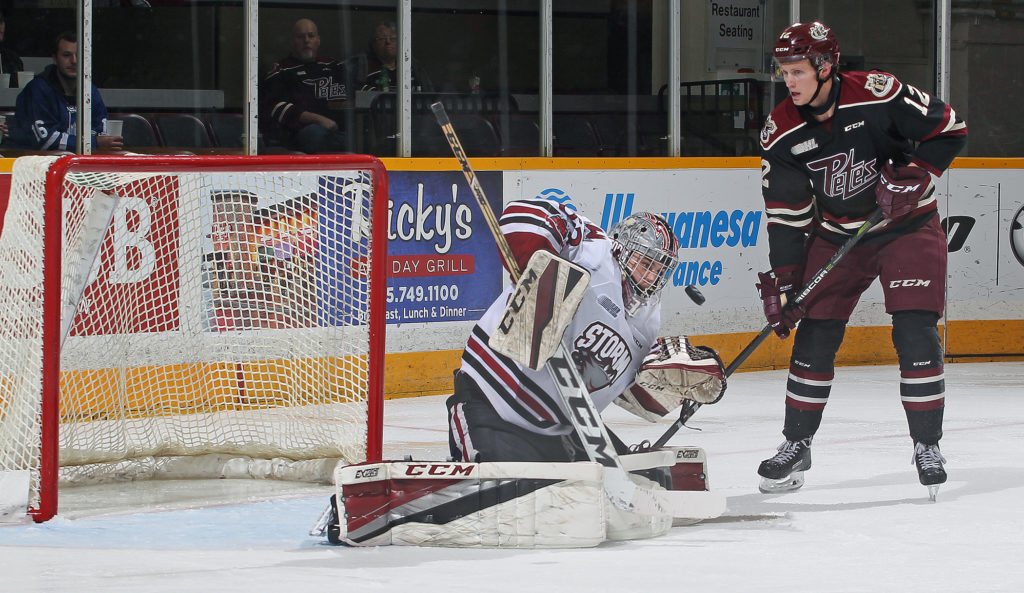 A strong start quickly turned into a downpour of Storm offense as the Petes fell 6-1 in Guelph on Friday night.

The first period was a quiet one with not much but a balance shot count between the clubs until the Petes opened scoring 14:30 into the game.

After Nick Isaacson sent a shot wide past Guelph netminder Anthony Popovich, the puck bounced back out to Declan Chisholm on the point. Popovich turned away Chisholm’s shot, but rookie Cameron Butler was on the doorstep to put away his seventh goal of the season.

The Petes held a lead in both shots and goals as the teams headed to their respective rooms after 20 minutes of play.

Things quickly turned in favour of the Storm as they scored three second period goals to take a stranglehold of the game.

On their first man advantage of the night, the Storm took their time getting set up. After a few failed shot attempts, Dmitri Samorukov and Nate Schnarr finally connected with Liam Hawel as he scored the equalizer with a low point shot.

35 seconds later, Peterborough product Cedric Ralph jumped on a Zach Poirier rebound to give the Storm a 2-1 lead mid-way through the frame.

Ralph would be penalized with a double minor, sending the Petes to a four minutes power play. The maroon and white managed four shots on the man advantage but couldn’t capitalize on the chance.

Guelph’s third goal of the period would come courtesy of Schnarr. After the Petes failed to keep the puck in the offensive zone, Schnarr picked it up at the blue line and skated it to Peterborough’s end. He cut into the slot before lifting the puck over Tye Austin.

The Storm carried leads in shots and goals into the final stanza.

Things only got worse for Peterborough as Guelph would add three more unanswered goals in the final frame.

Schnarr, Samorukov, and Hawel would connect again on a set play to extend Guelph’s lead to 4-1 with the Petes down a man.

Keegan Stevenson added to the damage just over two minutes later. After a turnover by the Petes in the neutral zone, Stevenson used a defenceman as a screen to fire a low shot past Austin and widening Peterborough’s deficit.

Stevenson also put away Guelph’s final tally of the night after pouncing on a point shot rebound, securing their 6-1 victory.

Hawel, Schnarr, and Samorukov were named the game’s first, second, and third stars.

Peterborough is back in action for their final game before the holiday break when they host the Ottawa 67’s on Sunday, December 16 at 2:05pm.  A free post-game skate with the Petes will follow the game (helmets and skates required). Tickets for Sunday’s game are available through the PMC Collins Barrow Box Office in person and over the phone Monday to Friday from 9:30am to 5:00pm, and 24 hours a day online.