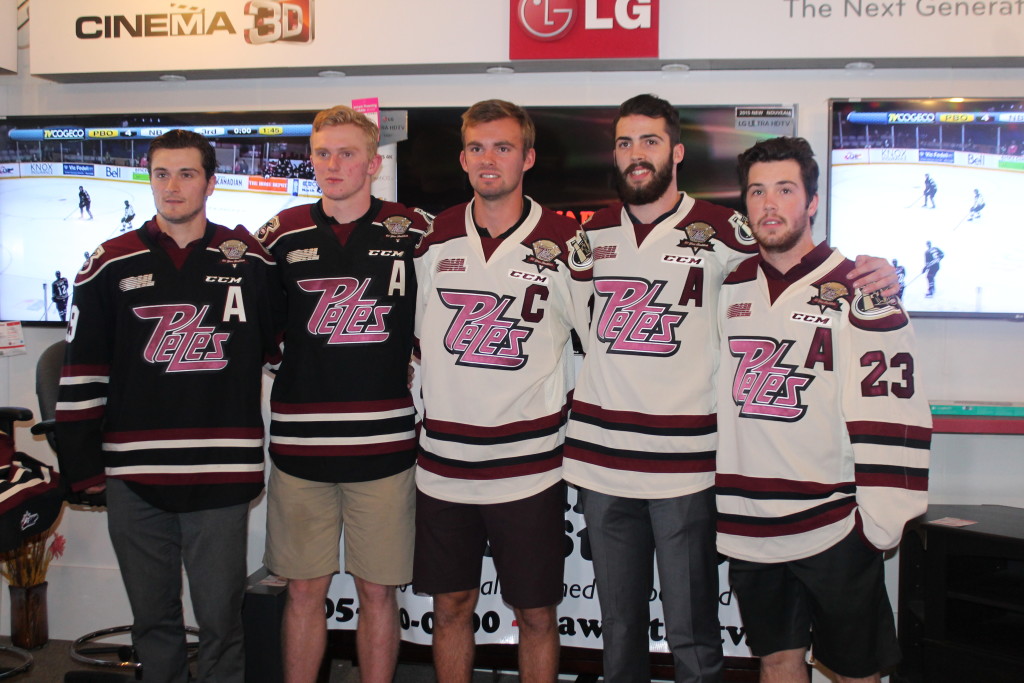 At the new Petes App launch event at Kawartha TV & Stereo on Tuesday night, Eric Cornel was named the captain of the 2015/16 Peterborough Petes. His teammates Hunter Garlent, Josh Maguire, Cam Lizotte and Matt Spencer will serve as assistant captains.

Dan Malta, a producer at TV Cogeco, hosted the event which was livestreamed on the Petes app. Cornel and his team-mates were invited to speak on air, and answered several fan questions as well.

“It’s an honour to be named captain of the Petes,” noted Cornel. “I’ve worked hard to become a better hockey player each time out on the ice, and this year I’m excited to challenge my team-mates to do the same.”

The Petes will dress assistant captains in pairs of two throughout the season. “We will have two captains at each road game, and two at each home game,” explained General Manager Michael Oke. “We’re excited about the leadership group we have in place this season.”

-> Click here to download the new Petes mobile app for Android or iPhone, and to submit a question <-

The free Petes mobile app powered by Kawartha TV & Stereo includes special features, promotions, rosters, statistics, and schedules as well as the new Petes loyalty rewards program. Fans who download the app this week can earn 15 free rewards points by entering the code PetesWelcome into the rewards section. Rewards points can be used to purchase Petes merchandize and offers from local businesses.

On the ice, the Petes are tied for first place in the OHL. Games continue this weekend against the Mississauga Steelheads on Thursday, October 1, on the road against Oshawa on Friday, and back home against Niagara on Saturday. Tickets are available here for Thursday and Saturday’s games, or by calling (705) 743-3561.