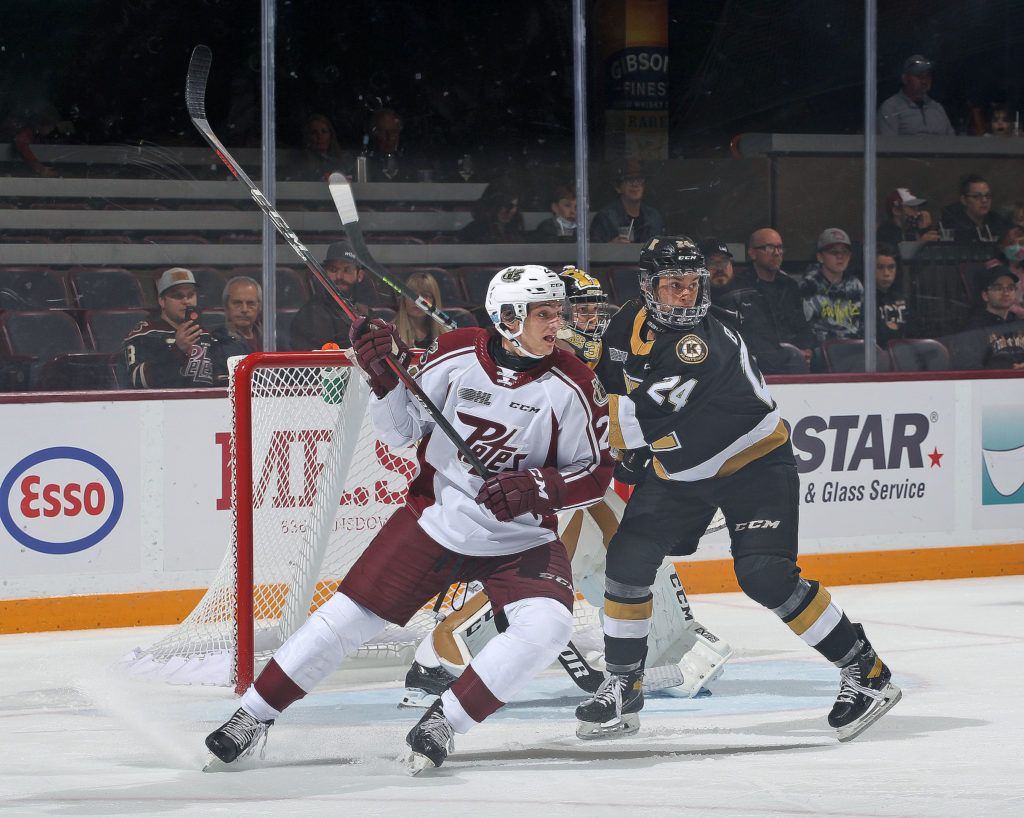 The experienced Kingston Frontenacs wore down the young Petes team in Kingston after skating to a 6-1 win in Limestone City in Friday night action. Samuel Mayer, who is the only Pete that has scored a goal against Kingston in the regular season, scored the Petes’ lone goal tonight.

The Lift Lock lads were off to a slow start at the Leon’s Centre as Kingston circled the puck around in our zone. Petes’ starter Michael Simpson remained calm and collective to keep the game scoreless. It wasn’t until a Petes penalty just expired when Fronts leading scorer Lucas Edmonds beat Simpson for a 1-0 lead.

Kingston’s goal was the spark the Petes needed as they spent the remaining second half of the first period attacking Kingston, rifling over six shots on net. After applying pressure and a line change, Mayer fired a snapshot from the point, which deflected off a Frontenac to tie the game 1-1. Kaspars Ziemins and Emmett Sproule, who extended his point streak to seven games, were credited with the assists on the defenceman’s third goal of the season.

.@Samuel6Mayer fires a shot from the point and it gets deflected in front to tie this up! Ziemins and @Emmett9393 get the credits on Mayer’s third tally of the year!#GoPetesGo pic.twitter.com/RXGhwTL5By

Mayer continued his play physical as he laid out Shane Wright, a projected first overall pick in the 2022 NHL Entry Draft, at centre ice before the period expired.

For the second straight period, the Petes were off to a slow start in the second period, but this time it cost the Petes. The Frontenacs had a two-goal period with Edmonds scoring his second goal of the night and Christopher Thibodeau banking in a one-timer, both goals didn’t give Simpson a chance.

Just before the second period expired, Captain Shawn Spearing interrupted a Kingston chance, desperately laying on the ice and breaking up the play with his stick to keep this game close.

After regrouping in the locker room in the second intermission, the Petes came out firing on all cylinders, but fatigue caught up to the maroon and white. Kingston turned up the pressure and spent the entire third period in the Petes end. Frontenacs scored three goals in the final 20 minutes. Jordan Frasca, Maddox Callens, and Francesco Arcuri each scored to give Kingston a comfortable 6-1 lead.

The finals shots were 40-21 in favour of Kingston. Edmonds, Arcuri, and Frasca were named the game’s first, second, and third stars.

The Petes are back in action Thursday, October 28 at 7:05 pm against the Hamilton Bulldogs for the first time this season. Scooby-Doo and Roger will be in attendance for Scooby-Doo Night at the PMC.