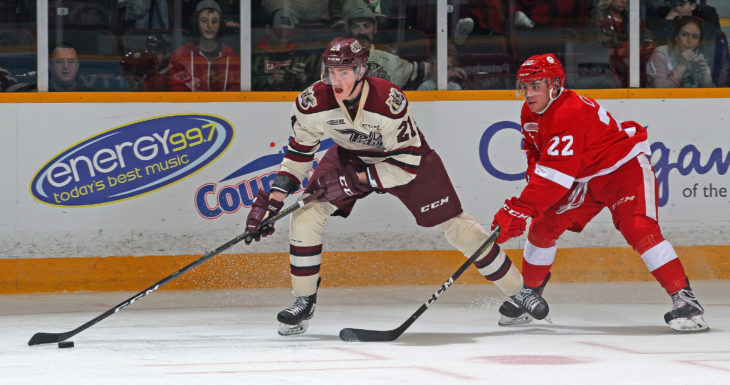 With a goal and three assists in Peterborough’s last contest, Semyon Der-Arguchintsev sits third in league scoring with 14 points and first in assists with 12. Nick Robertson is eighth in scoring with 11 points, and second in shots on goal with 30.

The Greyhounds are playing their second game in less than 24 hours, having fallen to 4-3 on Saturday night to the same Sudbury Wolves that defeated the Petes 9-6 on Friday. Prior to yesterday’s loss they had won four straight games.

Along with Mason McTavish, Robertson and Der-Arguchintsev are all on the longest current point streaks in the OHL at 5 games.

Greyhounds defenceman Ryan O’Rourke is among the league’s top blue liners. He leads in power play goals (2), is second in shots on goal (6), and second in plus/minus (+8) among OHL rearguards.

The Greyhounds are without Peterborough native Barrett Hayton who remains with the NHL’s Arizona Coyotes.