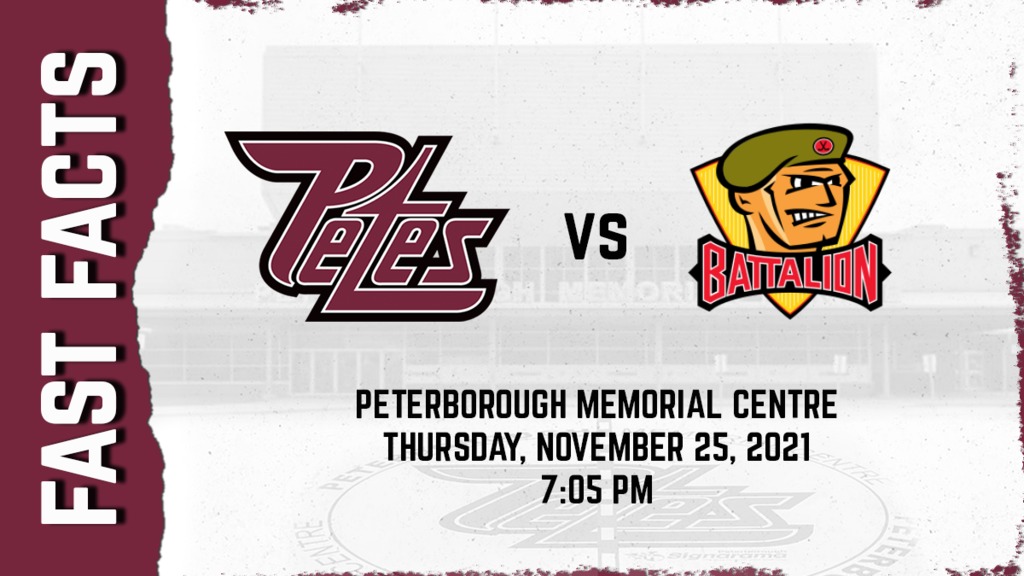 Mason McTavish, Anaheim Ducks’ third overall pick in the 2021 NHL Draft, is expected to be in the Petes lineup tonight. He re-joined the team on Wednesday afternoon for practice.

Peterborough is looking to build off of Sunday’s 9-3 victory over the 67’s to snap the Eastern Division leader’s four-game win streak.

Coe vs Robertson: Tucker Robertson, who leads the OHL with 34 points, will take on Battalion’s leading scorer Brendon Coe, who’s second in the OHL with 33 points. However, Coe leads the league with 24 assists while Robertson is fourth with 19.

The maroon and white plan to shut down Edmonton Oilers prospect Matvey Petrov, who has registered four goals and one assist in two games against the Petes this season.

Steaking Sporule 🔥After picking up four points (1G, 3A) in Sunday’s victory, Emmett Sproule extended his OHL’s longest point streak to 17 games, amassing eight goals and 19 assists this season. He’s two games away from tying the Petes’ longest point streak in modern history, which is led by Nick Robertson at 19 games.

Battalion’s projected starter Joe Vrbetic, is third in the league amongst netminders with a 2.61 goals against average. He’s tied for first with two shutouts and tied for second with 10 wins.

Mitchell Russell who scored a shorthanded goal against the Petes on November 4, is tied for second in the league with three shorthanded tallies.

Tye Austin is expected to make his first start on home ice since the Petes home opener on October 14.

WHERE TO TUNE IN:
More News