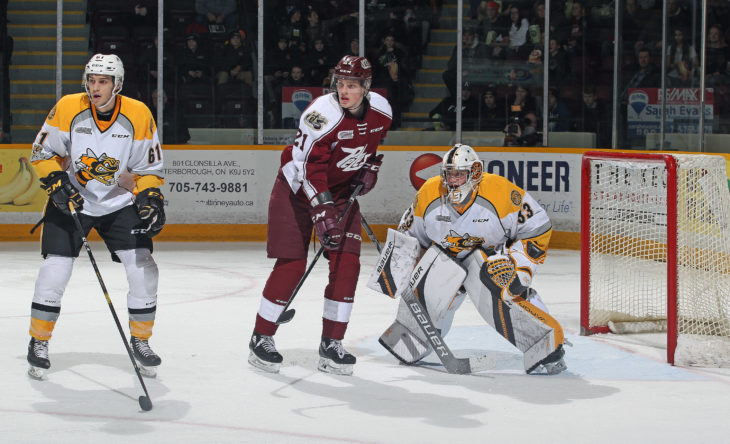 Both the Petes and Sting are coming off of 3-0 weekends. Peterborough defeated the Bulldogs, 67’s, and Generals, while the Sting were victorious over the Colts, Generals, and Frontenacs.

Forward Sean Josling had 11 points in Sarnia’s three wins last weekend, tallying 6 goals and 5 assists. His team leading performance earned him a spot on the CHL’s Team of the Week.

Hunter Jones is the league’s leading netminder after a stellar three win weekend. His 1.67 goals against average and 0.943 save percentage earned him OHL Player of the Week honours. Of all OHL goalies, he leads in wins (9) and is fourth in saves (262), third in save percentage (0.919), and third in minutes played (573).

The most shots the Petes have had in a first period this season (16) came in Sarnia on October 11. The Sting also had their most first period shots that game (11). The Petes recorded a season high 46 shots in a 6-3 win.

Carolina Hurricanes prospect Jamieson Rees is second in the OHL in shooting percentage, having scored 4 goals on 10 shots (40%).