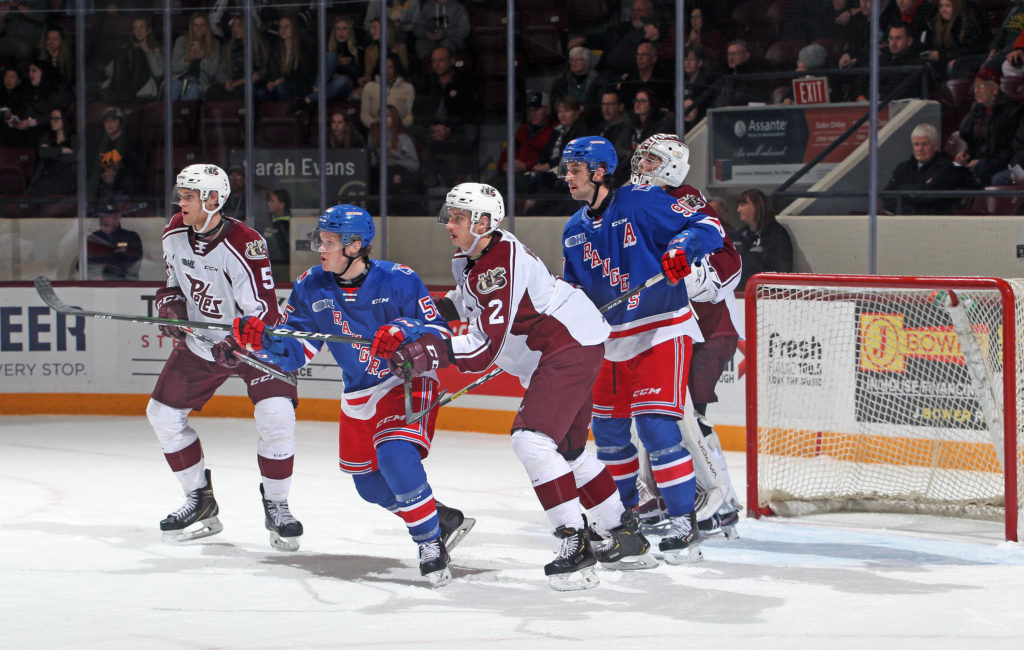 With a 3-1 win over the struggling Rangers at the Memorial Centre on Saturday night, the Petes maintain first overall in the OHL with a 16-6-1-1 record. Goaltender Hunter Jones faced 44 shots and Peterborough’s offensive found their grove again as they edged out Kitchener for the first time since 2014.

Peterborough had numerous scoring opportunities in the first period, including a penalty shot by Tucker Robertson and two power play chances, but the game remained tied at zero as the first period concluded. The Lift Lock Lads were trailing in shots 14-9.

Roughing infractions for both teams halfway through the second period opened up some extra space, leading to some 4-on-4 action. Hard work along the boards by Max Grondin led to a Liam Kirk pass to Declan Chisholm. The Winnipeg Jets prospect skated to the top of the circle and scored his third of the season as his wrist shot went past Kitchener’s Lucas Pfiel to give the Petes a 1-0 lead.

Tucker Robertson may have been denied on his penalty shot in the first period but he wasn’t denied when he scored his fourth of the season on Chad Denault’s rebound that gave Peterborough a 2-0 lead before the second period ended.

TUCKS! @Robertson_62 deposits a @Denault17 rebound behind Pfeil to extend our lead to 2-0!#GoPetesGopic.twitter.com/OKG1bUJkD3

Peterborough’s second period play was a huge improvement for the league’s first place team in the goal and shot department.

A couple tallies in the middle frame for the Maroon and White 💪#GoPetesGopic.twitter.com/C95tJbXfVP

The Petes kept their foot on the gas during the third period which led to Captain Zach Gallant scoring his 11th of the season. Gallant deked out a Ranger defender and created a 2-on-1 before his wrist shot beat Pfiel low blocker side to extend the Petes lead 3-0.

GALLY! @zachgally with a great shot out of the corner to beat Pfeil, making it 3-0 Petes! @BradyHinz assists.#GoPetesGo | #SJSharks pic.twitter.com/T2pA6GmaiR

With just over two minutes left in the game, the Rangers pulled Pfiel for an extra attacker. Jones stopped Riley Damiani’s initial shot, but Jonathan Yantsis converted on the rebound.

It wasn’t enough as the Petes held out the Rangers and took their first of two match ups 3-1.

Final shots were 44-38 in favour of the Rangers, however the Petes’ fifth overall penalty killing remained successful as they were 3/3 on the kill. The Maroon and White were 0/3 on the power play.

The Petes are back in action on home ice on Thursday, November 28 at 7:05pm as they battle the North Bay Battalion for the second time this season.