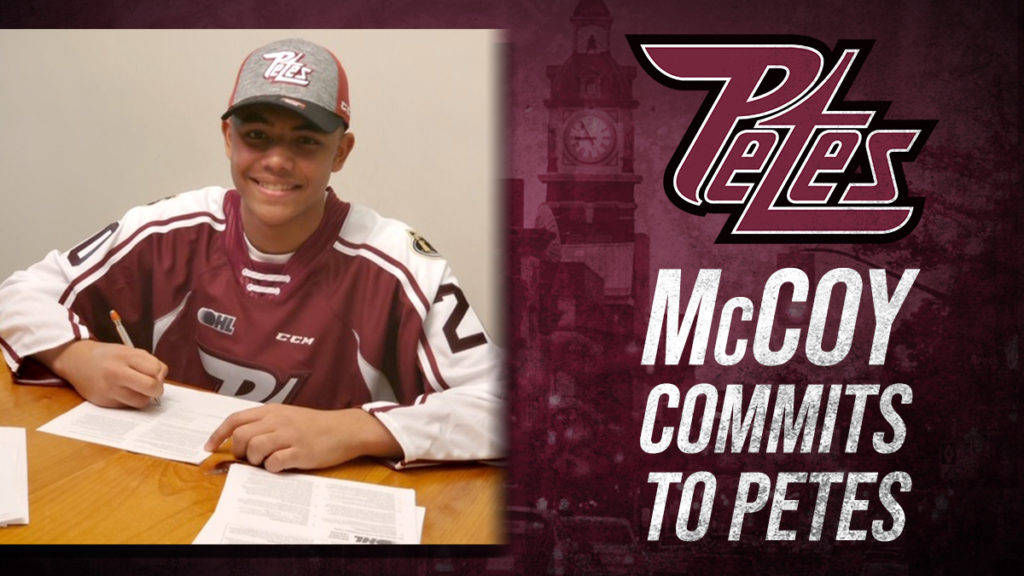 McCoy, a 5’11.5”, 177lbs defenceman, played for the OMHA Champion Quinte Red Devils during the 2019-20 season. In 35 games he recorded 6 goals, 29 assists, 35 points and 40 penalty minutes, and logged 5 assists in 8 playoff games. The Belleville, Ontario native, who has a late 2004 birthday making him a prospect for the 2023 NHL Entry Draft, was named the OMHA Minor Midget Player of the Year. He also appeared in 2 games for the OJHL’s Wellington Jr. A Dukes.

“Committing to the Petes is a huge honour and super exciting,” exclaimed McCoy. “I’d like to thank all the people who have helped me get this far, especially my parents and step parents for always supporting me in every way.”

“We felt very fortunate that we were able to select Donovan at fifteenth overall,” commented Oke. “He’s a dependable two-way defenceman that, with good size and skating, is tough to play against in his own end but can also contribute offensively.”

In the 1st round, 15th overall the Petes are incredibly excited to select Donovan McCoy (@Donovan87128882) of the @QuinteRedDevil! pic.twitter.com/kTwM0ynWie

“Donovan was used against the opposition’s top players to keep them off the score sheet,” added Oke. “When Quinte was behind and needed a goal, he was always ready.”

Newest @PetesOHLhockey blueliner Donovan McCoy of the @HometownHockey champion @QuinteRedDevil is looking forward to hitting the ice in Peterborough after being selected 15th overall 🎥 pic.twitter.com/cFQRXJdZdA