The Peterborough Petes produce more than professional hockey players. Guys have graduated and gone on to careers in the corporate world. They’ve become lawyers and education professionals.In Matt McCartney’s case a stop in Peterborough fostered a long-term relationship with music.

“I didn’t know what the whole scope of the OHL was and thought it was a pretty cool high level thing, I just didn’t think it was obtainable for me.”

McCartney chuckled as he reflected on his impact on the Petes. The Scarborough native donned the maroon and white for two years after a pair of seasons with the Lindsay Muskies.

In looking back at his time at the Memorial Centre, McCartney points to the 2014 comeback series against the Kingston Frontenacs as one of his most cherished memories.

“Cam (Lizotte) and I really tried to be the heart and soul guys on the team and that’s why we connected so much.

“At the end of Game 3 we started this brawl and it really just put a spark in our team and we just had this fire against them.” 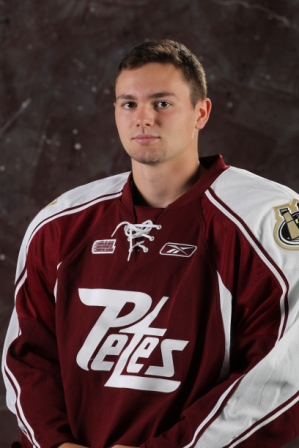 “In that series in Game 6 I scored a game-tying goal. Considering I had one goal all year to have one goal in that moment was pretty big. I think I got an assist too so half my points in the season were in that one game. I couldn’t have been happier with the timing.”

Lizotte, who McCartney more frequently refers to as “Lizzy,” additionally supported his teammate off the ice as he opened the door to one of the biggest moments in the centre’s career.

“Shannon McNevan was part of Tim Coles’ (Petes) chapel. They were good people and they were taking this time out to really talk to us. Shannon didn’t know I was playing music and Lizzy went up to him and was like, ‘Hey, this is Cartsy’s CD. He will never tell you but it’s actually good. You should listen to it.’”

McNevan, a music executive and founder of the Boots and Hearts music festival, listened to the set and landed McCartney and his band Northern Roads the opportunity to play at his festival.

“It was just the right place at the right time. I guess that’s what it takes sometimes.”

Northern Roads came together in the summer following his sophomore year of hockey. As soon as they locked in a lead singer, the group zipped to Phase One Studios and recorded 12 songs in one weekend. This is the album that eventually landed in McNevan’s hands.

“To put it into perspective, a good day at a studio was recording one song. They thought we were nuts and we did it. We recorded 12 songs in two days.”

Northern Roads gained traction booking shows through word of mouth referrals but like many bands the group came to an end as each member went after their individual careers.

“We chose a really hard industry to make it in. My mom always laughs, she says ‘You wanted to make it to the NHL and then you wanted to be a rock star. You’re not making it easy on yourself.”

Although the band separated, McCartney continues to carve out his own space in the music world.

“I was like what the hell am I going to do? I was still writing music along the way but I was just less motivated to do it. Like who am I writing for? It’s just in me.”

The former forward took a two-year music business program that introduced him to a variety of avenues.

“I learned that songwriting is a career with or without the artist. It opened up my world and I started honing my craft and writing with good people.”

McCartney’s hand in music is now centred around producing lyrics.

“There’s no exact formula. There’s definitely tricks and things to do to make great songs. There’s no right or wrong to doing it.”

When he isn’t putting pen to paper, McCartney has been freelancing in a variety of roles in live entertainment contributing to execution of major events like Canadian Music Week, JFL42 and most recently Toronto’s North by Northeast Festival. McCartney hopes to continue on a path that allows him to flex both muscles: songwriting and event planning.

Players come to Peterborough trying to hack it in hockey but more often than not they leave with additional opportunities beyond the ice and a network to support them along the way.