Former Petes to Suit up in the Olympics . . . for South Korea 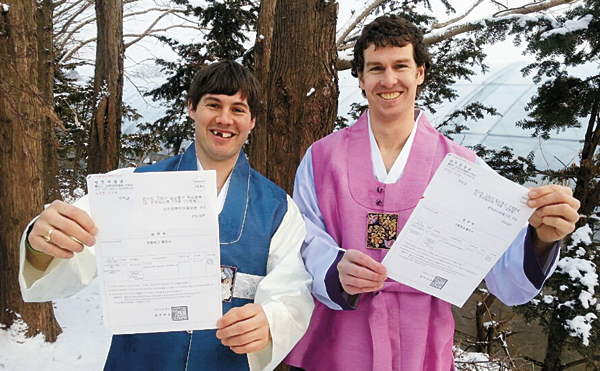 As is the case in any elite level international hockey tournament, the mens’ ice hockey rosters at the 2018 Winter Olympics Games in South Korea are chock-full of former OHL players.

What may surprise people is where two Peterborough hockey products landed.

Bryan Young, a Peterborough Petes alumnus, and Michael Swift, a former Mississauga IceDog, will be playing for the Land of the Morning Calm, otherwise known as South Korea, in this year’s Olympics.  They will don the red, blue, and black of the South Korean flag among six other Canadians, all of whom have earned South Korean citizenship.

Both Young and Swift, who are second cousins, played minor hockey in Peterborough before graduating to the OHL and eventually pro hockey. Young was part of the 2005-06 Petes OHL championship team, which was his final of three years in the league. He totalled 186 games with the mighty maroon and white before moving on to play with the Edmonton Oilers – the team that drafted him in the fifth round of the 2004 NHL Entry Draft.

These two liftlock lads have been playing in the Asian professional hockey league, High 1, for nearly a decade. Young moved his career there in 2010, with Swift following a year later on his cousin’s advice.

Both players consider the Olympics as the holy grail of hockey, despite the National Hockey League’s decision not to send the world’s best players to the Games.

“It would have been nice to have the NHL guys there,” said Swift. “But I think it improves our chances to push for gold.”

Both Swift and Young have represented South Korea a number of times on the world stage. The country is improving, recording their best ever World Championship finish in 2017, placing 18th – the first time they’ve been in the top-20 in the history of the annual event.

As hosts of the Winter Olympics, South Korea is hoping to improve even further. The going won’t be easy, though, as the hosts will be in a tough group which includes a match-up against Team Canada on February 18.

The #Olympics will feature #ptbo content, as usual! Will you be cheering on the South Korean men’s hockey team, featuring Petes alumnus Bryan Young (’03-’06)?

Where does your allegiance lie? Canada plays South Korea on Feb. 18. #gopetesgo

Peterborough athletic trainer Spike McCormick, who has spent substantial time training with both players, recognizes that they have a unique opportunity to play in the Olympics as their playing careers begin to wind down. In an interview with CHEX TV, McCormick noted that “it’s hard for them every year to go over to Korea but they were doing it for a bigger goal at the end. They saw the Olympics coming and hence why they got the citizenship in the first place.”

Opening Ceremonies for the winter games based in PyeongChang, South Korea, are slated for February 9.The men’s ice hockey tournament begins on Wednesday, February 14. Both South Korea and Canada play their first games on Thursday, February 15 at 7:10am against Czech Republic and Switzerland, respectively. The gold medal game is slated for Saturday, February 24 at 11:10pm EST.

Host Korea has named the men’s national ice hockey team for the #PyeongChang2018 Olympics. It will be the country’s strongest roster ever. https://t.co/RxyvW8TB2c