Four Petes named to Vaughn CHL Team of the Week 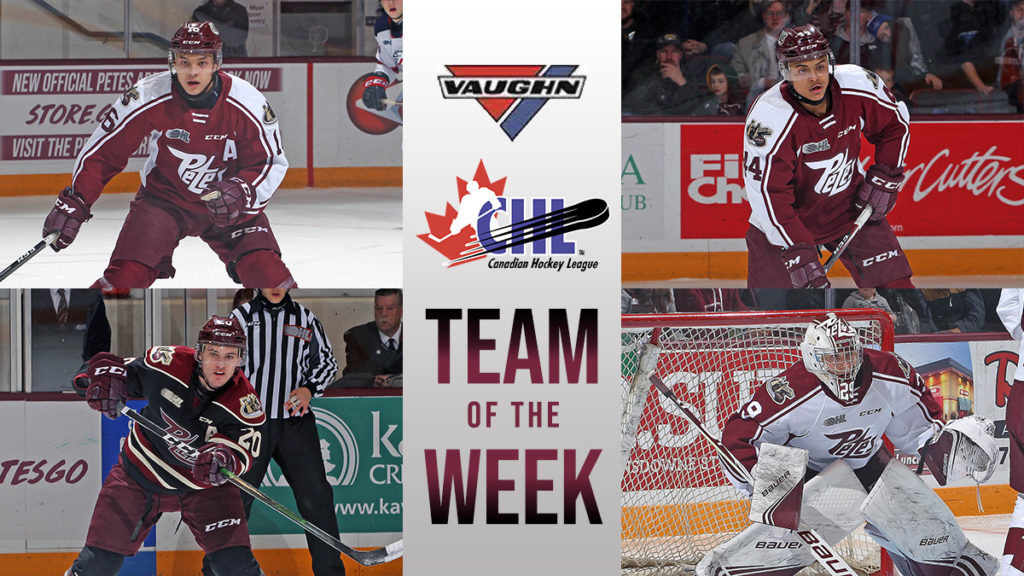 The Canadian Hockey League today announced the 24th edition of the Vaughn CHL Team of the Week for the 2019-20 season based on individual performances from March 2-8, with four Peterborough Petes earning spots on the six-man team.

Leading the group is Toronto Maple Leafs prospect Nick Robertson who wrapped up the week with 10 points counting five goals and five assists over three appearances. Standing atop the circuit with 55 goals, Robertson continued to fill the net over the past week, counting back-to-back multi-goal performances including Saturday’s 5-1 win over the Mississauga Steelheads in which he tallied twice en route to first-star recognition. For his efforts, Robertson was named the OHL ‘On the Run’ Player of the Week.

Also up front is Los Angeles Kings draft pick Akil Thomas who finished the week with four goals and five assists for nine points through three games. Thomas’ best performance came Sunday against his former club in the Niagara IceDogs as he put up a career-high six-point effort to lead his squad to a 12-1 road win.

On the blue line, Winnipeg Jets prospect Declan Chisholm put up an impressive showing as he closed out the week with eight points counting two goals and six assists over three contests. Chisholm, who sits third among all OHL rearguards with 69 points on the season, continued to add to his totals as his week counted a four-point night in Thursday’s 8-0 win over the Hamilton Bulldogs in which he matched his regular-season high and was credited as the third star.

In the blue paint, Minnesota Wild prospect Hunter Jones was nearly unbeatable across a pair of contests as he came away with a 2-0-0-0 showing while turning aside a combined 70 shots to close out the week with a 0.50 goals-against average and .986 save percentage. Facing the Hamilton Bulldogs on Thursday, Jones put up his best showing as he stopped 40 shots to notch his fourth shutout of the season and claim second-star honours in an 8-0 victory.

William Dufour of the Drummondville Voltigeurs and Ty Smith of the Spoke Chiefs round out the team.

Support the Petes as they pursue post-season positioning with a Playoff Push Pack! Get four ticket vouchers, two foam fingers, two cowbells, and an autographed 5×7 player photo for just $69.99 plus HST – a savings of more than $75.00! Click here to purchase online, or contact Mike in the Petes office by email or by phone at (705) 743-3681 x 263.