From the penalty box to behind the bench: Rob Murray 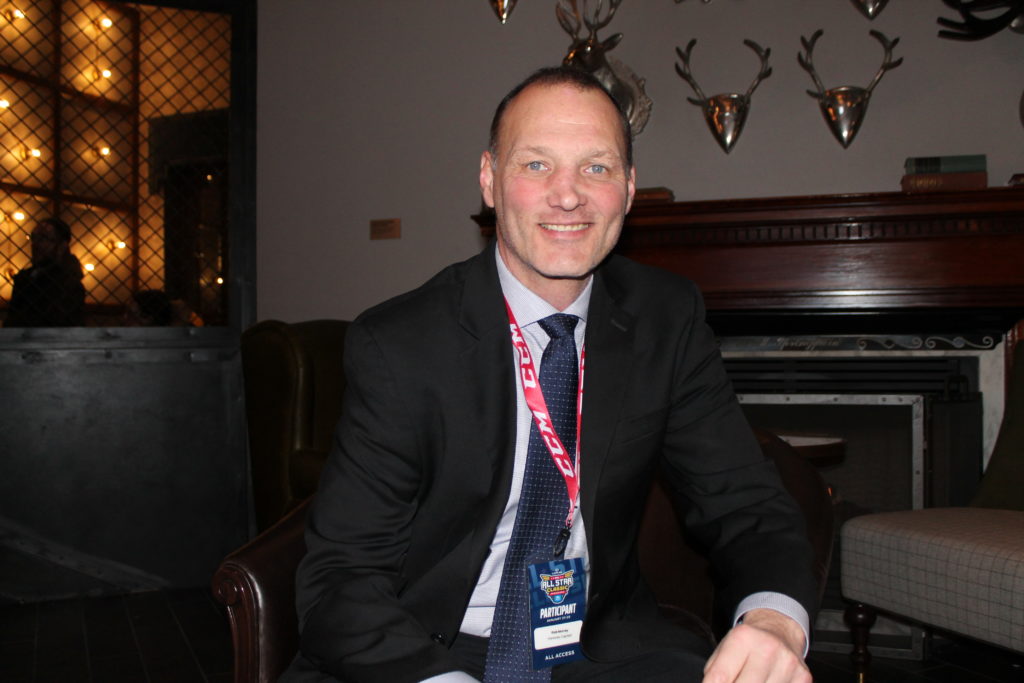 The Petes have produced an abundance of tough hockey players over the course of sixty three seasons: Stan Jonathan, Shawn Thornton and Derek Mathers just to name a few. Among this group of rough and tumble Petes alumni stands six feet tall Rob Murray. Weighing in around 175 pounds throughout his junior (‘84-’87) and professional career, the Petes centre was built as anything but an aggressor, but that did not prevent coach Dick Todd from slotting him into that role.

“I did a good job transforming myself into a rat. I did a good job of it and I enjoyed doing it. I enjoyed having a physical presence. People were always surprised I was never a big guy, I think even when I played pro I was never more than 175 pounds and I could hit as good and hard as anybody else.” 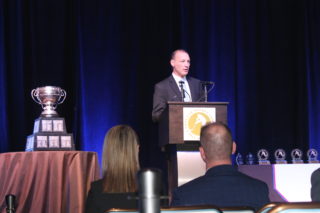 His duty as a physical competitor – someone whose job it was to make things harder for the other team – followed Rob into his 16 season playing career. Murray was drafted by the Washington Capitals in 1985, dressing for them in 1989 and 1990, and for three seasons with their AHL affiliate Baltimore Skipjacks. From 1991 to 1995 he played for both the Winnipeg Jets and their farm team, the Moncton Hawks, joining the Springfield Falcons afterward and becoming a fan favourite in the city in the process. He would eventually retire in Springfield in 2003.

“I was more of an agitator and I did a very good job of it. I think it was my fear that I wouldn’t stick around with the Petes if I didn’t do what I had to do; I enjoyed doing it I wasn’t pushed into that roll. It followed me throughout my career, my role never really changed as a player through my three years in junior and then my time at the junior level I was always that guy but, as I said, I was good at it and I made a living at it.”

Rob admits meeting many of his toughest competitors while dawning the maroon and white.

“Some of the guys, when I was a first year guy in junior, like Gary Robertson, he was a man and I was a boy. You kind of ran into a lot of those guys. There was a guy named Jeff Cornelius and I fought him in an exhibition game and he absolutely killed me, I was 17 and he was 21.”

Murray currently holds the second rank for most penalty minutes in the AHL with 2,940. Since transitioning to his current role as Head Coach with the ECHL’s Tulsa Oilers, the former centre admits to mellowing out, although insists his intensity towards the game persists. 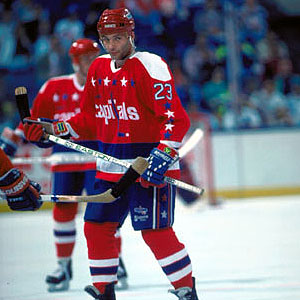 In his journey from player to coach, Rob confesses that it was a couple of years in the pursuit.

“I played 16 years, but I think after 13 years I was trying to get into coaching. I had always set it as a goal to stay in hockey, but there were no jobs.”

On his path to coaching Rob revved up his studying of the game, creating his own practice book by pulling drills from his previous coaches and reflecting upon what he learned from each coach throughout his career. Kevin McCarthy, Assistant Coach of the Nashville Predators and previous coach with the Springfield Falcons, Walt Kyle, Head Coach of the Hamilton Bulldogs from 1998-2000, Jim Playfair of the Saint John Flames (2000-2003), and Dick Todd are just a few of the figures in his career that he reviewed in laying out his own coaching foundation.

Murray’s work proved advantageous as he joined the Providence Bruins as Assistant Coach from 2003-2008, then as Head Coach from 2009-2011. He then moved to Alaska and coached the ECHL’s Aces from 2011-2017, earning a Kelly Cup in 2014. The Petes alumnus currently serves as Head Coach and Director of Hockey Operations to the Tulsa Oilers.

In the differences of challenges between working between the AHL and ECHL Murray explains, “At the AHL you are hired to be a coach and that’s it – that’s what you’re there to do. I’m in charge of trades, transactions, salary caps, everything. I’m in charge of all hockey operations as the coach in Tulsa and, to be quite honest, I really enjoy it. It gives you a lot more experience, a lot more responsibility, and it’s a hard job. You have to do more at less.”

Additionally he notes the grind of recruiting players throughout the summer months, a task unique to the ECHL. The coaching philosophy of Rob Murray is one counter-intuitive in stereotypes based around his style of play and is grounded in gratitude.

“I want to teach players to respect the game of hockey. By respecting it I mean recognizing it’s given you a job. You’re doing something millions of kids in Canada would give anything to do. I want to teach these guys how to be good professionals and good men.

Murray made his mark as a player in the OHL and the AHL and continues to do so as a coach in the ECHL. His physical play broke some records and built him a loyal fan base in Springfield, the city where his jersey is currently retired. Murray and his continued success in coaching are proof that tough guys are anything but one dimensional.