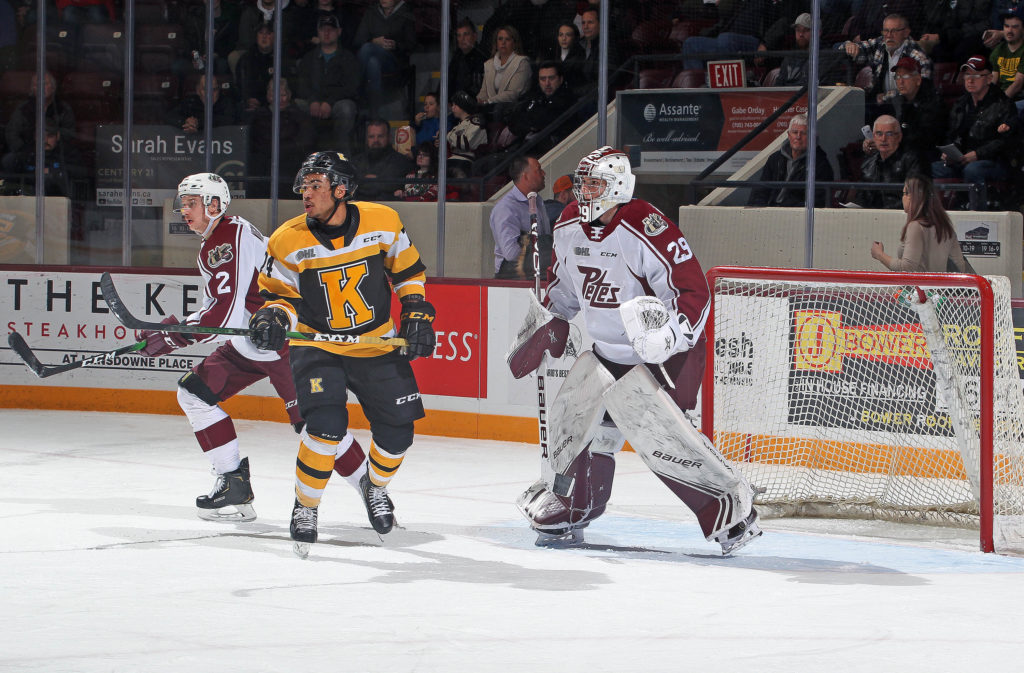 The Frontenacs evened the season series at three games a piece with a 4-3 win over the Peterborough Petes in Kingston on Wednesday night.

For the second straight game the Petes opened scoring, this time 6:43 into the first period. Akil Thomas netted his second goal in Maroon and White by deflecting a Hudson Wilson point shot past Christian Propp that came off the stick of Zach Gallant. The marker extended the LA Kings prospect’s point streak to 12 games.

It didn’t take long for the home team to respond though, with Shane Wright answering back for the Frontenacs less than two minutes later. The exceptional status player, who leads OHL rookies in scoring, nabbed his first of the frame after blowing by the Petes along the far boards and tucking the puck short side behind Hunter Jones.

The Black and Gold were treated to an unsuccessful power play before Nick King found the Frontenacs’ first lead of the night. Former Pete Dustin Hutton moved the puck to Nick Wong who pushed the puck to the blue line where King unloaded a blast that beat Jones.

Wright became the first freshman to reach 30 goals with an unassisted tally after claiming a face off win and putting the puck on net.

The stats after 20 minutes would tell the story, as the Frontenacs were firing all cylinders to hold on to a 3-1 lead.

The middle frame was filled with infractions, with Kingston taking back to back calls before the Petes killed three consecutive penalties.

Despite rifling 19 shots on net in the second stanza, the Petes were held off the score clock through 20 more minutes, as were the Frontenacs.

19 shots on net in the second, but still trailing after 40.#GoPetesGo pic.twitter.com/yeTzYJ9uQ7

Another Pete lengthened their point streak to 12 games when Nick Robertson brought the Petes within one goal of the home team early in the final frame. The Toronto Maple Leafs second rounder forced a turnover before breaking into the Kingston zone to deposit the puck behind Propp for his 39th goal of the season.

ROBBY!! @nickrob2001 brings us within one with a trademark shot! 3-2 Frontenacs.

After exchanging a few more penalties with the Frontenacs, the Lift Lock Lads tied the game with just over 5 minutes left in the game. With a centering pass from Gallant, Thomas’ initial shot rebounded back for him to bury into the Kingston net, locking the score at 3-3.

Unfortunately the tie was short lived as Nick Wong, assisted by Hutton, restored Kingston’s one-goal lead with 4:09 left to play.

Final shots were 48-28 in favour of Peterborough. Propp, Wright, and Thomas were named the games first, second, and third stars.

The Petes return to action on Thursday, February 6 at 7:05pm to host the North Bay Battalion, and welcome the Ottawa 67’s on Saturday, February 8 at 7:05pm.