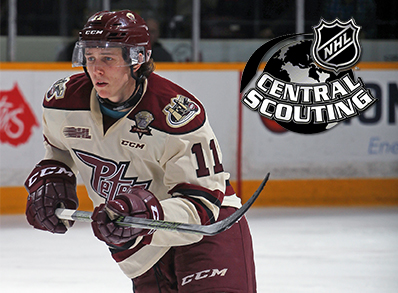 With the 2016 NHL Draft in Buffalo behind us and the 2016-17 season two months away, NHL Central Scouting has already compiled a list of players to watch in the months to come.

The 2016-17 NHL Central Scouting Futures List was released on Saturday, featuring talent from across the Canadian Hockey League as players look to make a strong impression in the lead up to the 2017 NHL Draft on June 23-24 at the United Center in Chicago, Illinois.

Peterborough centre Zach Gallant was named to the list. The Oakville, Ontario native showed tremendous growth throughout his first OHL season in 2015/16, contributing in all areas of the ice, particularly in the defensive zone. The 6’1″, 183lbs forward has been a stable in the Hockey Canada Program of Excellence, and appears poised for a breakout season in 2016/17.

A total of 76 current CHL competitors join an additional five players committed for the 2016-17 season on the list that includes 290 names from across the globe.

“The 2016 draft class lived up to all the hype regarding the exceptional talent available and the unpredictability of the order in which prospects would be taken,” NHL Director of Central Scouting Dan Marr said. “It’s anticipated that 2016-17 will again be a deep draft class for prospects, and there is a lot of depth at all positions.”

The 2016 NHL Draft class featured 96 CHL players led by Cape Breton Screaming Eagles forward Pierre-Luc Dubois who was selected third overall by the Columbus Blue Jackets. The CHL produced 15 of the 30 players selected in the first round.

“The list is based on evaluations we made of the players during the 2015-16 season,” Marr added. “A number of these players will be changing teams for 2016-17 and that will be reflected in our preliminary players to watch list in September.”

While the preliminary players to watch list will provide the A, B and C ratings for players in each of the major junior hockey leagues, the Futures List offers a collection of skaters and goaltenders NHL scouts should consider targets of interest heading into the season.

Players in italics are committed to OHL for 2016-17 season. * indicates late 1998 birthdate

Want to cheer on Zach and the Petes in the 2016/17 season? Make sure you get your season tickets while supplies last. Great deals are still available, with the best perks in the OHL! Check out the details here.