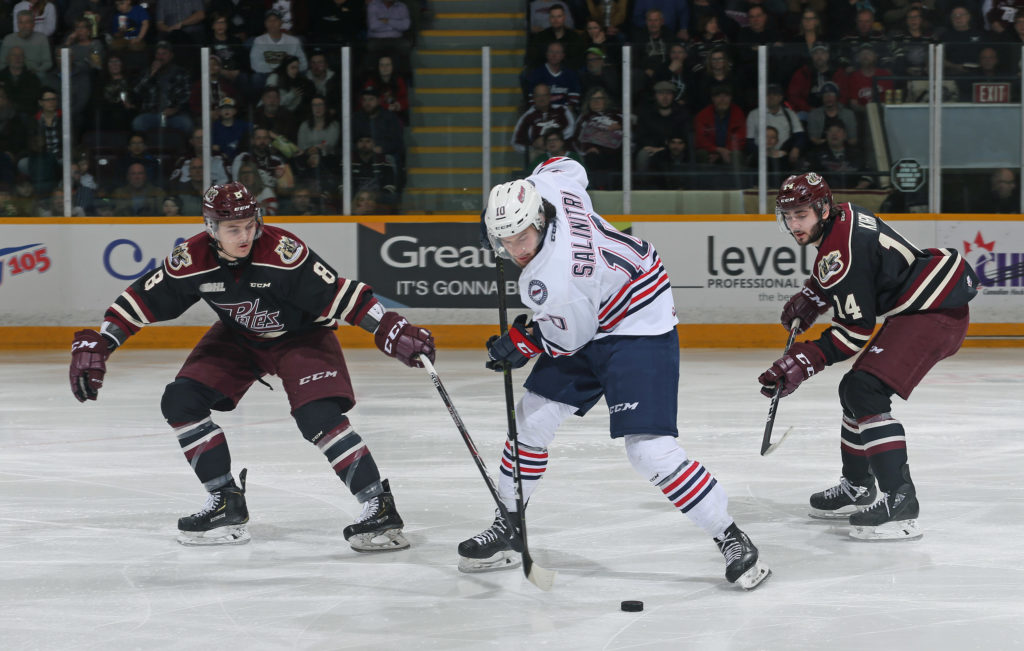 Following a day off the Petes and Generals hit the ice in Peterborough in front of a sell-out crowd of 3,734 for game four of their first round series. The Petes were looking to get even, but instead the Gens extended their series lead with a 5-2 victory on the PMC on Thursday night.

The Petes opened scoring for the first time in the series at 6:11 as Declan Chisholm was sent a beautiful pass from Zach Gallant which found Brady Hinz as well.

CHIZ!!! After laying out a massive hit, @zachgally dishes to @chis_decs who finishes and give the Petes a 1-0 lead!#GoPetesGo pic.twitter.com/8T4DAiQZyK

After 20 minutes the Petes would hold the only goal so far while the Generals held the shots on goal lead by 10-9.

Big hits and an even bigger goal. That's the story of the first frame! The Maroon and White lead 1-0!#GoPetesGo pic.twitter.com/qrblCNapwK

Oshawa struck back just past the mid-way point of the period and tied the game with a goal from Anthony Salinitri off the sticks of Brett Neumann and Danil Antropov, giving 1 goal to both sides.

The Gens would get their second of the night several minutes later as captain Kyle MacLean took a pass from Serron Noel and beat Hunter Jones to mark the sheet 2-1 in favour of the visiting club.

Before the end of the period the Petes would come back to tie the score at 2 when Adam Timleck and Chris Paquette capitalized on a 5 on 4 opportunity and were able to find Nick Robertson who sent a rocket through the five-hole of Kyle Keyser.

ROBBIE!! The fastest hands in the Eastern Conference, @nickrob2001 was able to use those silky mitts to find the loose puck and tie the hockey game!#GoPetesGo pic.twitter.com/bNKginbIQH

It would not be until the fourth minute of the third period before the next goal would be scored. The Generals took control of the scoreboard with an unassisted slap shot from Salinitri for his second of the night to bring Oshawa into the lead 3-2.

That would not be the last as the Generals would rally to make it 4-2 with an unassisted Neumann goal on an empty Peterborough net.

The final empty netter would solidify Oshawa’s victory at 5-2, giving the Generals a 3-1 lead in the series as it shifts back up the 115 to Oshawa for game five on Saturday, March 30 at 7:05pm.

The three stars respectively were Salinitri of the Generals, Robertson of the Petes, and Neumann of the Generals, with the Mark’s Hardest Working Player of the Game awarded to John Parker-Jones.

If the Petes win in Oshawa on Saturday tickets will go on sale to the general public online as soon as the game is over, and in-person and over the the phone when the Baker Tilly Box Office opens at 1:00pm on Sunday.

The Petes Fan Bus is headed to Oshawa for Saturday’s game. For $50 fans will receive transportation to and from Oshawa, a game ticket, snacks, Petes merch, giveaways, and more. The bus will leave the PMC at 5:00pm on Saturday. Contact Julia at (705) 977-0127 or fill out an online form to sign up.