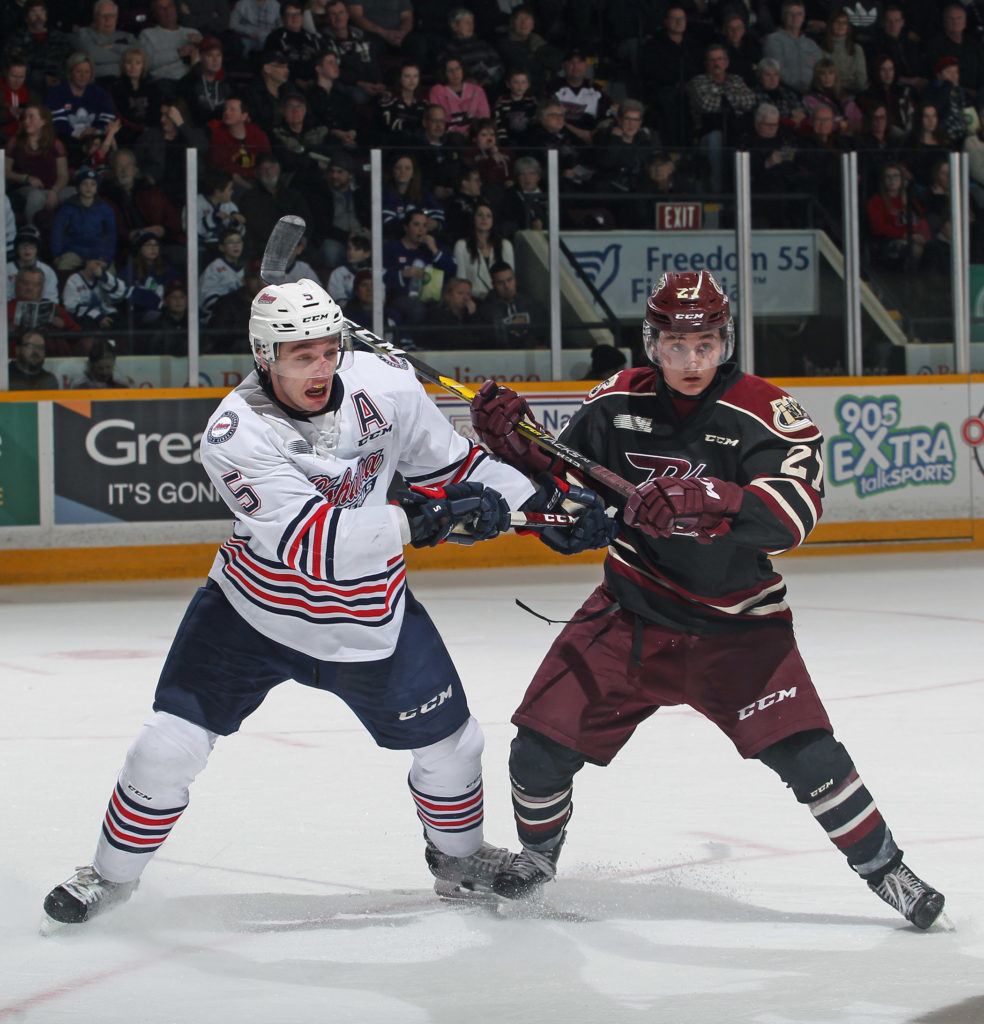 The Petes were home for a three game homestand and began that defense with the recently shuffled Oshawa Generals, with both teams looking for a victory in restructured forms it was the Gens who earned the W by a single goal at 6-5 in Overtime.

The game kicked off with presentations to Tye Austin for his achievements as the OHL East Division Academic Player of the Month, and to three Generals that took part in the 2019 IIHF World Junior Championship – Kyle Keyser (USA) and Nando Eggenberger and Nico Gross (Switzerland). Gibson’s Finest Canadian Whisky also made a donation of $2,500 to the Petes Education Fund. 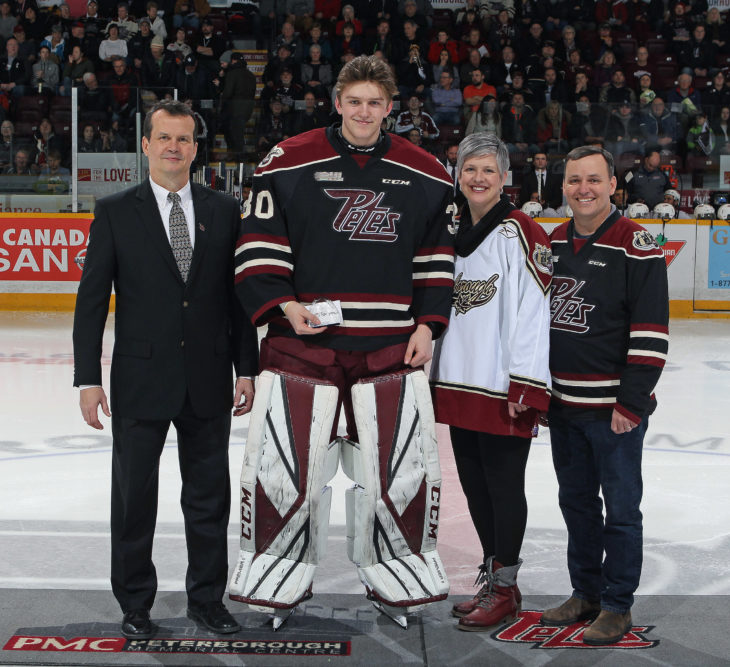 The first mark of the opening period came from the Generals as Anthony Salinitri got an assist from Allan McShane and Nicholas Mattinen to give the visitors a 1-0 lead.

The home team earned their first of the night with 9:25 on the clock as recently announced CHL Team Cherry member Nick Robertson scored unassisted to bring the game to a 1-1 tie.

ROBBIE! @nickrob2001 with an are-you-kidding-me deke on fellow 🇺🇸 Kyle Keyser to tie the game at ones! Unassisted. #gopetesgo #ptbo pic.twitter.com/3fkNUsmb0Z

Oshawa wouldn’t let the tie stand for long as only minutes later  McShane took a puck from  Giovanni Vallati and Mattinen past Hunter Jones to put the Gens in a 2-1 leading position.

26 seconds before the buzzer sounded the Petes returned the game to a tie with a goal from Max Grondin assisted by Chad Denault and Cole Fraser.

Thanks to a late-period tally by Grondin, we're all square at 2-2 against the 'Shwa. P2 coming up next. #gopetesgo #ptbo pic.twitter.com/LRAYayhiGE

It wasn’t until 12:09 on the cloak in the second frame that anyone registered a goal to break the tie, it just so happened to be Ryan Merkley’s first as a Pete with assists going to two of his fellow 2018-selected NHL prospects  in Declan Chisholm and Semyon Der-Arguchintsev.

MERKS! @ryan_merkley blasts his first goal as a Pete to give his new fam the 3-2 lead. Assists to @chis_decs & SDA. @MapleLeafs -> @NHLJets -> @SanJoseSharks pic.twitter.com/EF4nWVxIRc

For a moment it was a 3-2 lead for the home team until Oshawa’s recent acquisition Brandon Saigeon took an assist from Switzerland’s World Junior Captain Nando Eggenberger to once again tie the score at 3-3 while marking his first with the Gens.

With 41 seconds left the Generals broke the tie they had created and claimed the lead by a score of 4-3 as McShane scored his second of the night on a breakaway with an assist from the other Swiss junior in Nico Gross.

The second ended with the Gens in control of both the scoreboard and the shots, 4-3 and 28-18 respectively.

40 minutes in the books, and the Gennies lead 4-3. Rally caps, #ptbo!#gopetesgo pic.twitter.com/TKtQWGF96p

The third would open sharply as it was punctuated with an early goal from Oshawa in under 20 seconds to increase their lead to 5-2 as William Ennis scored unassisted.

Another late goal would bring the Petes within one as Erik Cermak was assisted by Paquette and Fraser to raise the score to 5-4.

Before the buzzer sounded to signal a Generals victory the score was tied by a rocket from Adam Timleck as he was assisted by Fraser and Brady Hinz to make it 5-5 overall.

Final shots finished off at 35-27 in favour of the Generals .

McShane,Fraser, and  would be named the game’s first, second, and third stars, while Robertson  was named the Mark’s Hardest Working Player of the Game.

The Petes are back for the second game of the homestand, against the North Bay Battalion on Saturday, January 12th at 7:05pm, this also happens to be the 7th  Saves For CF game benefiting Cystic Fibrosis Canada.