Getting to know Zack Lewis 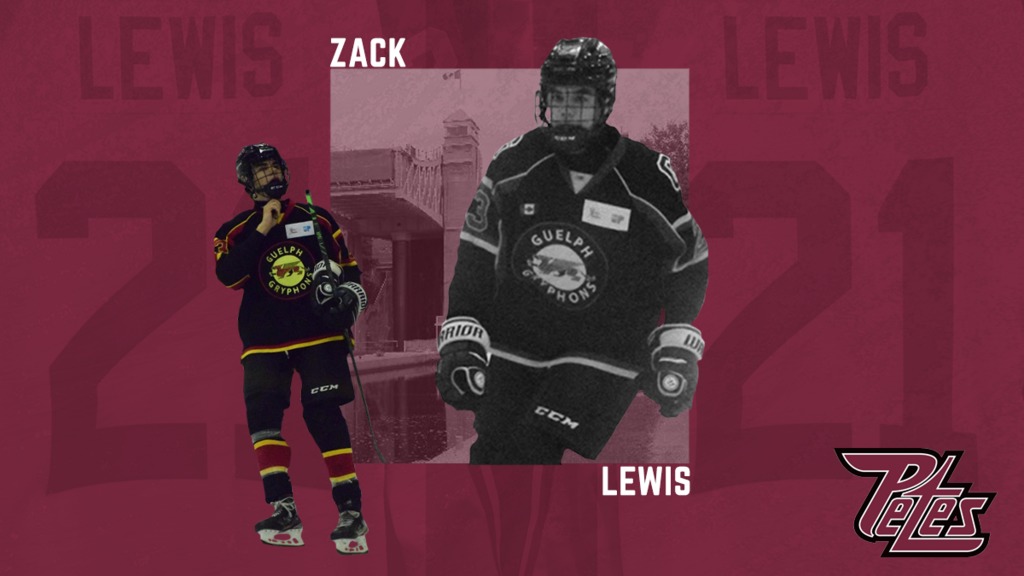 Navigating minor hockey in Ontario for any player can be complex and rewarding. Involved in the journey are coaches, parents, and mentors, who all play an integral role in shaping their on-ice experience and character development. “Getting drafted to the OHL has been a dream of mine since I was four years old,” said Zack Lewis, 3rd round pick by the Petes at the 2021 OHL Priority Selection.

Like most, Lewis has a group of influential people in his life that helped him become the hockey player he is today and realize his goal of being drafted into the OHL. Growing up in Guelph, Ont., as a member of a sports-centric family, Lewis’ parents molded his love of the game, by bringing him to Guelph Storm games when he was four years old.

“Going to the Storm games is what really got me thinking about playing hockey and about trying to play in the OHL someday.”

The 6’2”, 168 lbs, right winger has always loved playing hockey but it wasn’t until he was 12 years old that he realized that his dream of playing in the OHL could become a reality. From that point forward, Lewis was determined to do everything possible to make his lifelong dream come true. Whether it was working out every day, or driving to Hamilton for extra ice sessions, the Petes’ draft pick leaned on his work ethic to steer his journey, “I have the mindset that I will always be the hardest worker out there. I don’t ever want to be outworked.”

From the @GuelphMinHockey, the Petes are thrilled to select Zack Lewis with the 49th pick in the OHL Priority Selection! #OHLDraft pic.twitter.com/5aTC85yQo4

Lewis acknowledged the struggles of trying to stay on top hockey shape while in lockdown during the COVID-19 pandemic but credited his coach Tim Friamo for helping him and all his teammates from the Guelph Jr. Gryphons get through it. “Coach would always stay on top of us to make sure nobody was falling behind. He would invite scouts out to watch us skate, and he would take extra time out of his day to make sure that we were getting all the support we needed. Coach Friamo played a huge role in helping me get to where I am today.”

The Guelph native received a lot of recognition for his on-ice play however, he particularly prides himself on his leadership in the dressing room, within the school, and in the community. During a fundraiser with his Guelph Jr. Gryphons teammates with goals to gather funds for a Ugandan child born with a cleft foot, Lewis was able to raise $250, which was the most raised on his team. “I wanted to help those in need, and it’s a great feeling to be able to contribute to and know that you made a direct impact on somebody,” Lewis explained.

Not only is Lewis excited to get involved with some charities as a Pete, but he’s also eager to inspire kids in the Peterborough area, in the same fashion that the Storm players did to him. “The interactions I had with Guelph Storm players growing up really helped me realize my dream of playing in the OHL. I would love the chance to pay it forward and hopefully inspire others on their hockey journeys as well.”

Lewis is thrilled that his childhood dream came true on Friday, June 4, 2021, and will continue with his ‘never be outworked’ mentality as he advances his development throughout the summer to try and crack the maroon and white lineup this fall.