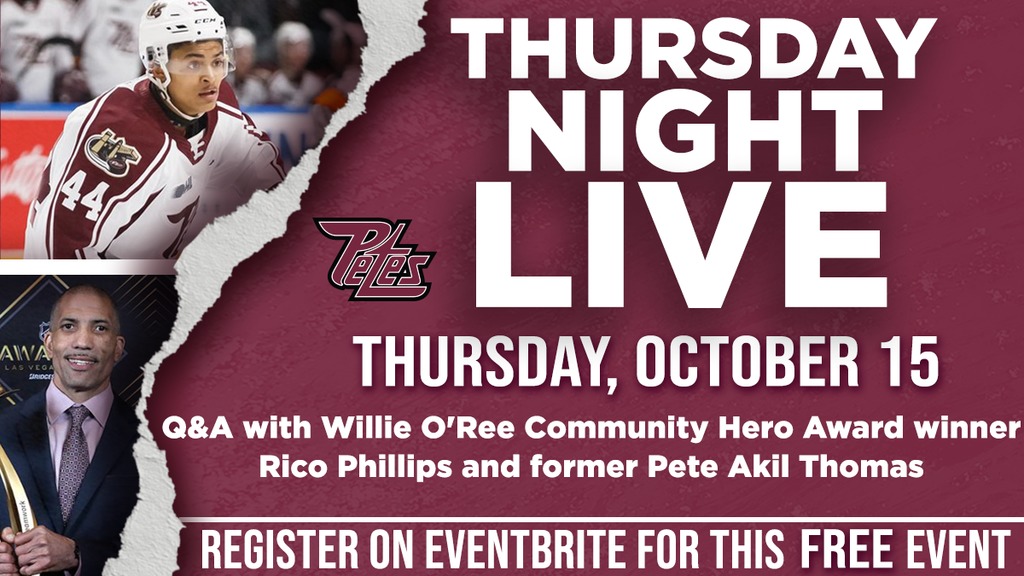 Petes fans continue to enjoy Thursday Night Live as they get ready for the OHL season to start in December. This Thursday will feature a pair of some of the most important voices in hockey right now, OHL Director of Cultural Diversity and Inclusion Rico Phillips and World Junior Championship Gold Medal-Winning Goal Scorer, Akil Thomas.

TNL Week Four will feature an in-depth Q&A with 2019 Will O’Ree Community Hero Award Winner Rico Phillips and former Pete Akil Thomas. In 2010 Phillips founded the Flint Inner-City Youth Hockey Program in an effort to increase racial and socioeconomic inclusivity in minor hockey and most recently was appointed to the board of the Hockey Diversity Alliance.

Thomas played for the Petes during the 2019-20 season and is celebrated for being the Golden Boy as he scored the game winning goal for Canada at the 2019 World Junior Championship. The former Petes centreman signed an entry-level contract with the LA Kings in 2019 and also operates his own clothing company, Zale Apparel.

Back again for the fourth week is the popular first intermission trivia! A game-worn jersey is up for grabs for unofficial Petes historian who outcompetes the other participants at home.

The musical guest this week is The Anxious Patients, who will be bringing their acoustic stylings to the screen during the intermission. There will be plenty of other opportunities

Several other special features have been added to the mix for this week’s show, including a special reveal of the TNL Week Four guest. Fans will have an opportunity to win prizes if they can predict the hockey hall of fame guest who is on tap for October 22.