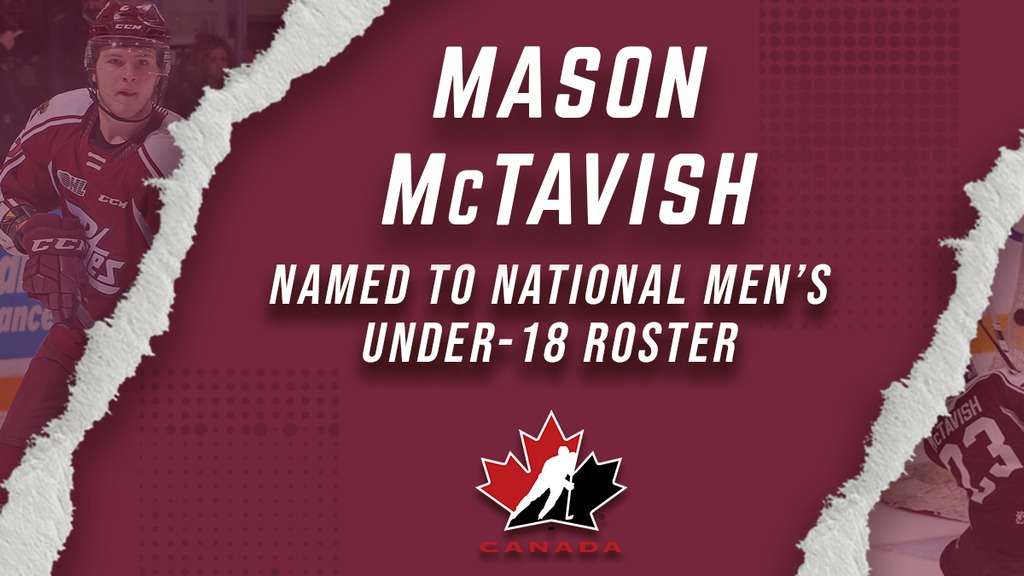 Hockey Canada announced today that forward Mason McTavish has been named to Canada’s National Men’s Under-18 roster. McTavish will travel to Frisco and Plano, Texas, USA for the 2021 IIHF  U18 World Championship that is scheduled from April 26-May 1.

Although McTavish was selected to the U18 Hockey Canada roster in two consecutive years, this will be his first opportunity to skate with the other U18 members as last year’s camp took place virtually due to the ongoing COVID-19 pandemic.

“It’s always an honour representing Canada, you always want to be well prepared and that’s what I have been doing in my quarantine,” says McTavish. I’m looking forward to it. I met a couple of the guys at U17 and created a lot of new friendships there, we have a really great chance of bringing home a gold medal to Canada, that’s the most exciting part.”

The Pembroke native put in a strong showing in his rookie season recording 29 goals and 13 assists for 42 points, enough to finish second in the OHL rookie scoring race. He was named to the OHL 2nd All-Rookie team.

“This is a great opportunity for Mason to represent his country, as he’s done previously,” said General Manager Michael Oke. “He is one of the top 2003-born players in the country and we look forward to watching him play in the U18 World Championship.”

While the 2020-21 OHL season is on hold, McTavish suited up for EHC Olten of the Swiss League and collected 11 points (nine goals, two assists) in 13 regular season games. In four playoff appearances, the centreman finished fourth on the team and seventh in the Swiss League with two goals and five assists for seven points.

The Petes’ fifth overall pick in the 2019 OHL draft received an ‘A’ rating by the NHL Central Scouting Service on January 23, 2021. He is one of 12 OHL players to represent Canada at the Hlinka Gretzky Cup.

The last Petes player to be named to an Under-18 roster was Nick Robertson in 2018. Robertson finished fourth with Team USA when the tournament was hosted in Edmonton, AB. He scored four goals and an assist in five tournament games, including a hat trick in his team’s controversial overtime loss to Team Canada in the semi-finals. Mason’s father Dale McTavish also has represented Canada multiple times at the Spengler Cup, winning the tournament in 2007 and participating in 2001, 2004, 2005 and 2009.