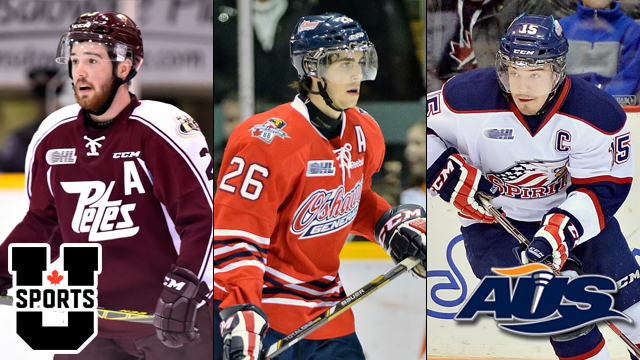 An additional four OHL graduates have been named to AUS All-Star and All-Rookie teams for the 2016-17 season.

The AUS Men’s Hockey Championship Semi-Finals are currently underway, with the first place UNB Varsity Reds taking on the fourth place Saint Mary’s Huskies in one series while the second place Acadia Axemen battle the third place StFX X-Men in another.

The Atlantic conference rookie of the year and recipient of the A.J. MacAdam Trophy for 2016-17 is Saint Mary’s Huskies forward Hunter Garlent (Peterborough Petes).

In just his first year with the Saint Mary’s program, Garlent finished second in the conference and third in the nation in points with 45 in the regular season.

In 30 games played, the five-foot-nine commerce student from Thorold, Ont., racked up 18 goals and 27 assists. He tied for most game-winning goals with four on the season.

In the first three games of the AUS postseason, Garlent had a league-leading four goals and five total points. He scored two goals and added an assist in Saint Mary’s Game 1 win over UPEI and notched another two goals in Game 3—including the game winner which allowed the Huskies to advance to the semifinals.

Garlent will now look to become the first-ever Saint Mary’s player to be selected as the U Sports (formerly CIS) rookie of the year later next month. The last AUS player to receive the honour was former StFX standout Jason Bast (Moose Jaw Warriors) following the 2010-11 season.

In his fourth season with the Acadia Axemen, defenceman Geoff Schemitsch (Oshawa Generals) has been chosen as the Atlantic University Sport most sportsmanlike player and recipient of the Don Wells Trophy.

A kinesiology student from Thornhill, Ont., Schemitsch finished the regular season with 24 points. He scored five goals, added 19 assists and finished with a plus-minus rating of +16. In 30 games played this regular season, he amassed just 18 penalty minutes.

Schemitsch was also named an AUS first team all-star today for the first time in his career. Last season, he earned AUS second team all-star nods and in 2013-14, he was a part of the AUS all-rookie team.

Last season, he was also selected as the AUS conference male representative for the CIS (now U Sports) Top 8 Academic All-Canadian awards.

The former fourth round pick by the Tampa Bay Lightning in the 2010 NHL Draft played four OHL seasons between the Owen Sound Attack and the Oshawa Generals from 2009-13, winning an OHL Championship with Owen Sound in 2011. In total, Schemitsch recorded 13 goals, 106 assists and 119 points over 222 career OHL regular season contests.

Schemitsch is the first Acadia player to be named the conference’s most sportsmanlike player since the 2006-07 season when former Axemen standout Brandon Benedict earned the honour.

He now becomes the Atlantic conference nominee for the U Sports R. W. Pugh Award. The only Acadia player to ever win the national honour was Greg Clancy in 1994-95.

Former UNB standout Chris Culligan is the most recent AUS player to earn the national honour, he won following the 2013-14 season.

StFX’s Eric Locke (Saginaw Spirit) is the 2016-17 Atlantic conference recipient of the Godfrey Award and is the AUS nominee for the prestigious Dr. Randy Gregg Award.

The Godfrey Award, named after Dr. Bill Godfrey, is given annually to the player who best represents the spirit of intercollegiate hockey by his leadership both on and off the ice and by his conduct throughout the season.

In his third-year of eligibility from Toronto, Ont., Locke has worked hard on the ice, in the classroom and in his community this season.

He played in all 30 games for the X-Men this regular season, posting 13 goals and 15 assists for 28 points.

In two StFX postseason wins so far, Locke has led the X-Men with two goals and two assists.

Last season he was named the AUS most valuable player and a CIS (now U Sports) first team all-Canadian.

The 23-year-old former seventh round draft pick by the Buffalo Sabres in 2013 played four OHL seasons between the Windsor Spitfires, Barrie Colts and Saginaw Spirit from 2010-14, amassing 116 goals, 135 assists and 251 points in 233 career regular season games.

Off the ice, Locke is a three-time academic all-Canadian who finished at the top of his class in the BSc human kinetics honours program with a 95 per cent average. He hopes to attend medical school next year.

Locke is heavily involved in both the StFX and Antigonish communities. He has served as his team’s representative on StFX’s student-athlete advisory council for the past two seasons. He is also a member of the StFX Pre-Med Society, the StFX Leadership Academy and the winner of the Leader of Distinction Award.

The Atlantic University Sport first and second team all-stars were also announced today, along with this year’s all-rookie team. CHL team that player graduated from is included in brackets.