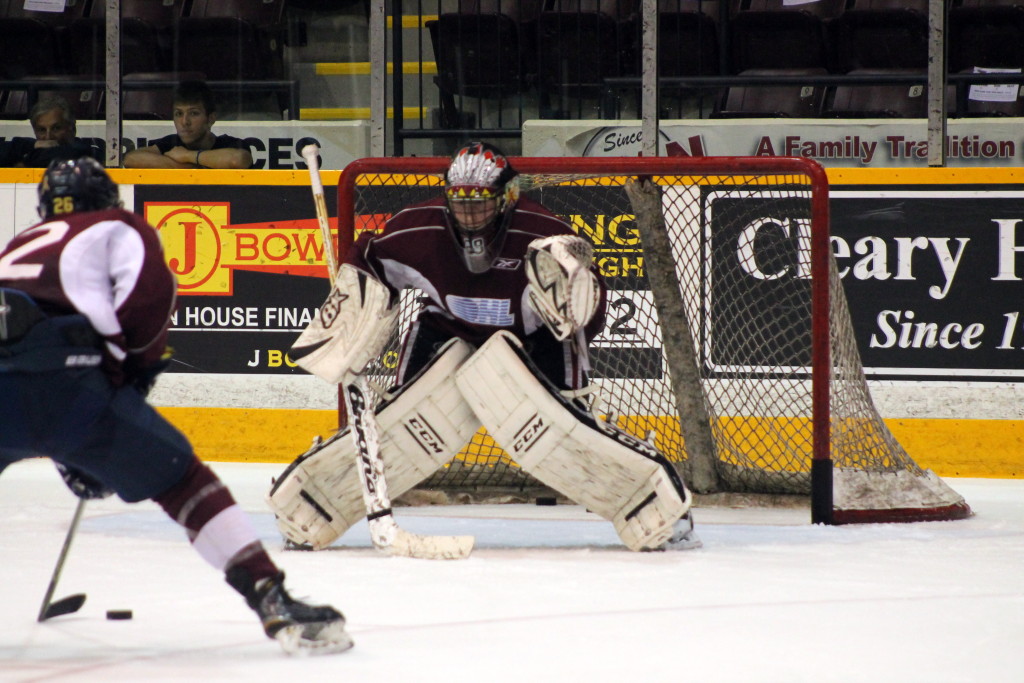 Hunter Jones has seen his stock rise over the past couple of months.

The Brantford goaltender, who last season played minor midget AAA for the Greater Toronto Hockey League’s Mississauga Reps, was drafted in April by the Ontario Hockey League’s Peterborough Petes. He followed that by playing for GTHL Blue in May in the OHL Gold Cup, a showcase tournament for the province’s top under-16 players.

And next week Jones is off to Calgary as one of the top-16 under-17 goalies in the country as they take part in Hockey Canada’s Program of Excellence Goaltending Camp. A good showing there could see Jones suiting up for Canada at the World Under-17 Hockey Challenge in the fall.

“At the start of the year, I was not expecting this at all,” said Jones, who will turn 16 in September. “Over the past couple of months it’s been happening so quickly.

“I really want to play for Team Canada and I think, if I make it that far, it will be an unreal experience. If I can keep this rolling, it will be good.”

Jones has come a long way since he started playing hockey about 10 years ago as a house league defenceman.

One season, he moved into goal for the final regular-season to give the regular goalie a chance to play forward and has been in the crease ever since.

The Grade 10 student at Brantford Collegiate Institute began his hockey career with the Brantford Minor Hockey Association but moved to the GTHL in peewee.

This year’s team in Mississauga wasn’t in the upper echelon of the league but Jones said that may have helped him in the long run.

“It was a learning experience,” said the son of Paul and Sharron. “Getting peppered with shots you might not come out with the win every night but you’re going up against the best shooters and you’re getting more development because of how high the caliber of hockey is.

“It was a really good experience to prepare me for the next level.”

Jones hoped that the next level would be the OHL but he wasn’t sure. Peterborough was one of the teams that showed interest in him throughout the season but teams like the current Memorial Cup champion London Knights also were intrigued . . .

At the end of the day, Jones was selected in the fifth round (89th overall) by the Petes.

“When they picked me it was an unreal feeling,” said the six-foot-three, 199-pound netminder.

“I love the Peterborough organization. They’re such a classy organization and they’ve been in the league so long.”