“I still love being a hockey player“: How Ryan Spooner revived his career in the KHL 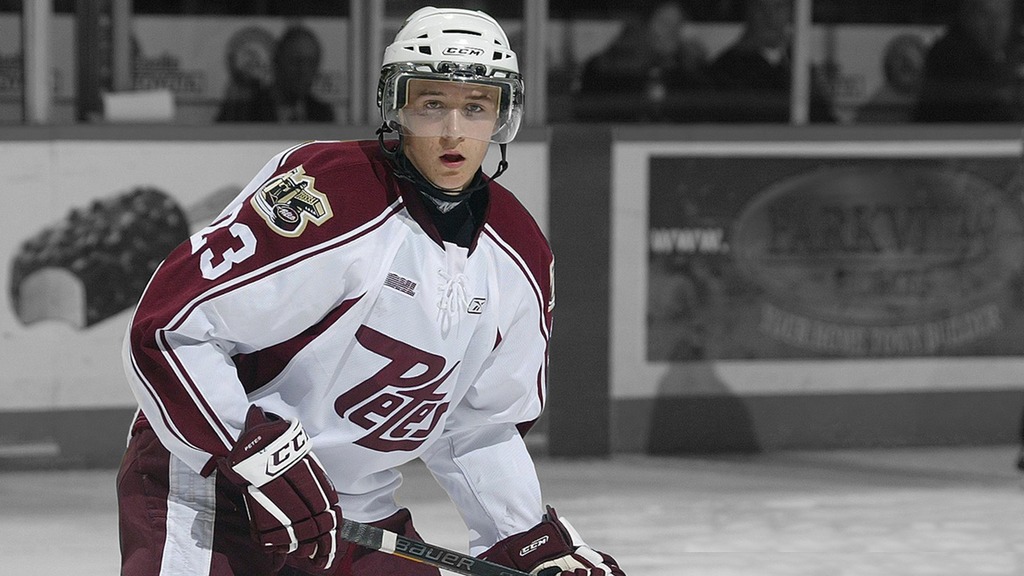 Minsk Arena in Minsk, Belarus is over 7,000 kilometres from the Peterborough Memorial Centre. The home of the Kontinental Hockey League’s (KHL) HC Dinamo Minsk, the arena holds 15,000 fans and represents a small but passionate niche in the hockey world. Despite its obscurity among Canadian hockey fans, there is a connection between the maroon and white and Belarusian hockey: Ryan Spooner.

A native of Ottawa, Ont., Spooner spent three seasons with the Petes before being traded to the Kingston Frontenacs and eventually finishing his junior career in Sarnia. All in all, he exited the OHL with a total of 113 goals and 146 assists in 230 games.

“I honestly had a great time,” Spooner said of his career with the Petes. Now back at home in Ottawa during the offseason, he remembers being mentored by his older teammates and members of the community. “I don’t think I’d be where I am today if it wasn’t for some of the help of [my teammates].”

After being drafted by the Boston Bruins with the 45th overall pick in the 2010 NHL Entry Draft, Spooner began his professional career with the AHL’s Providence Bruins before making his NHL debut on February 6, 2013.

In parts of six seasons in Boston, Spooner racked up 41 goals and 101 assists in 253 games. His NHL debut exactly five years behind him, Spooner was traded to the New York Rangers in February 2018, spending a season and a quarter there before winding up in Edmonton as a member of the Oilers. The Oilers traded him to the Vancouver Canucks, who then placed him on waivers before buying out his contract in June 2019.

It was, for all intents and purposes, a difficult stretch for Spooner. He wasn’t enjoying playing hockey as much and asked his agent to look for opportunities to play in Europe. Of course, such adversity is extremely common for professional hockey players, pushing Spooner to get past it even more.

“I kinda knew what was in store for me if I stayed in North America,” Spooner admitted, adding that he likely would’ve had to “grind it out” in the AHL only to get called up and play on the fourth line. “I needed to get back to enjoying playing hockey and be excited to go to the rink.”

When he initially signed with HC Lugano of the Swiss National League (NL), the plan was to play one year abroad to build up his stock and eventually return to the NHL. But, like many, his plans were disrupted by the COVID-19 pandemic; Spooner quickly found his way to Minsk, where he played two seasons with the Dynamo alongside former NHLers Andrei Kostitsyn and Shane Prince.

“I didn’t know what to expect [in Belarus], so it was a little bit tough,” Spooner recalled.

But, despite some minor adjustments—Spooner admitted to having some trouble getting used to the different ice sizes in Europe and learning to play the KHL-style “possession game”—he found his groove and scored 16 goals in 79 KHL games, adding 60 assists.

“I had a fantastic two seasons there,” Spooner said of his time in Minsk.

Though the language barrier was an issue for Spooner and the other foreign-born players, they had the support of their head coach, Toronto-bred Craig Woodcroft, who tried to make things easier for them in Belarus. His comfort in Minsk helped him feel confident enough to sign another deal in Russia, this time with Avtomobilist Yekaterinburg, who play in the league’s Kharlamov Division.

He hasn’t played there yet due to the ongoing pandemic, but his new team’s roster boasts five former NHL players including Korbinian Holzer, Peter Holland, and Pavel Datsyuk. Former Petes coaches Mike Pelino and Mike Keenan also recently coached in the league.

Overall, Spooner remains honest and realistic about his future in hockey, noting astutely that he doesn’t think a return to North American hockey is on the horizon for him. Having been traded three times in the NHL and bought out once at the highest level, his self-awareness has helped him craft a solid career overseas.

“For me, that ship has sailed,” Spooner said of a return to the NHL. “I’ve made peace with the fact that I won’t be playing in North America again.”

Instead, he’ll keep on enjoying the game as long as he can, focusing on improving his game and searching for opportunities that allow him to keep doing what he loves.

“I still love being a hockey player and I love putting in the work.”