“I think ‘dream come true’ is kind of an understatement” 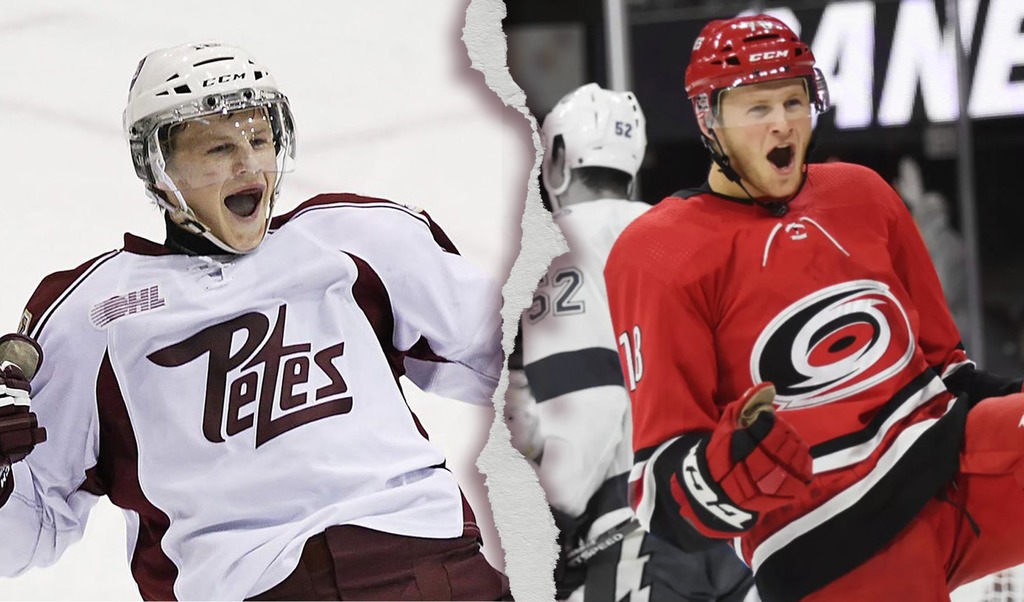 You know what story is just as good – if not better than – an exceptional status player, the ones of the underdog who went late in the draft and hustled their way to the top. Fitting this narrative to a tee is Petes alumnus Steve Lorentz.

The Waterloo, Ont. native was selected in the 12th round (226th overall) in the 2012 Priority Selection by the Petes, a rank that certainly didn’t guarantee ice time at the Memorial Centre. He suited up in 64 games for the Petes in his rookie year and following a growth spurt, persistent efforts on and off the ice, improved upon his total points by a multiple of 3 from year one to year four, and went from maintaining a +/- of -4 to 12.

In looking back at his time with the Petes, Lorentz struggled to identify one moment that stands out above the rest, as he summarizes the entire experience of playing in Peterborough as being overwhelmingly positive.

“It’s so tough, I couldn’t pick just one. It’s so cliche for a junior guy to say it was the best four years of my life, but it was such a new experience going away from home and living with my billet family, still to this day, they’re my second family,” explains the 6’4″ centreman.

“To be playing hockey every day in a hockey town like Peterborough, and just to be able to do what I love as a teenager and to be able to rise through the ranks and to turn my hockey into what could be a job someday. Meeting the players along the way, who I still keep in contact with, and are still some of my best friends.”

In terms of the on-ice memories that rise above the rest, like many who were a part of the 2014 Petes, Lorentz points to game seven of round one of the playoff series against the Kingston when the maroon and white came back to eliminate the Frontenacs, following a three-game deficit.

As for the individual mentors who supported Lorentz throughout his junior hockey career, he admits that it took a village of guidance that lead him to where he is today.

“There were so many people who kind of helped me get to this point, who I can’t really thank enough for the sacrifices they made. The people who vouched for me, and saw something in me as a player and as a person, so I was fortunate to get so many breaks along the way, there are probably more than I even know of.”

“My cousin Zach who I looked up to at the time, he was a couple of years older than I was, he kind of carved out his own path and he was a junior hockey player, and probably just my dad and realizing that I had a little bit more hockey skill than he did but seeing his work ethic, and all the things he sacrificed for the family and seeing how much he loved the game of hockey, it made me just really want to have fun with it but as hard as I possibly could,” outlines Lorentz, who is the sole brother among a family of four siblings.

In 2014, Lorentz was overlooked by all teams at the NHL draft, but in 2015 he heard his called by the Carolina Hurricanes as the 187th overall pick. Following his last season with the Petes where he donned an “A” on his jersey, tallied 61 points, and collected 9 goals in 12 playoff games, Lorentz was offered an NHL entry-level contract by then-general manager Ron Francis.

From 2017-20, Lorentz rotated between the Florida Everblades of the ECHL, and Charlotte Checkers of the AHL, earning a Calder Cup with the Checkers in 2018. This past season, the Petes alumnus cracked a permanent spot with the Hurricanes and has found himself amongst one of the most fun teams in professional sports determined to prove all the naysayers wrong as they navigate their way through the 2021 NHL playoffs.

“I think dream come true is kind of an understatement. It’s all been a bit of a whirlwind, but at the same time it’s been so fun learning from guys who I was one cheering for, and was a fanboy and now I get to know them personally. It’s been so nice being able to play and compete and realize that I can actually play at this level and carve out a career in this league, and especially on this team.”

“The culture here is so similar to Peterborough, everyone gets along and it’s a smaller market team that doesn’t really hold us back. We have some fight in us, and we may not always get the recognition that we deserve, but that doesn’t really matter to us. We put our hard hats on, and we try to do the best we can. That’s all I’ve ever wanted to do is play in the NHL and win a Stanley Cup,” recaps Lorentz.

In typical Lorentz fashion, as he is working to acquire the NHL’s most sought-after trophy, he continues to make time for the Peterborough community, donating a personal Canes jersey to the virtual walk to Make Cystic Fibrosis History.

“I wouldn’t be in the situation I am right now without Peterborough being a part of my roots, and the Petes being a part of my life. Back in those days, Andrew D’Agostini was doing Saves for CF, and was a part of that community. It’s so nice to give back, and it’s so rewarding to help out people who are going through tough times.”

“We played in the Saves for CF games every year, and it was awesome to have a little trooper stand out on the blue line with us. I’m happy that I am able to help out in any way that I can.”

If you would like to make a bid on Lorentz’s signed jersey and support the virtual walk to Make Cystic Fibrosis History: click here.

Lorentz and fellow Petes alumnus Jordan Staal currently lead Nashville by one game and will be playing them in Game 4 on Sunday, May 23 at 2:30 pm.