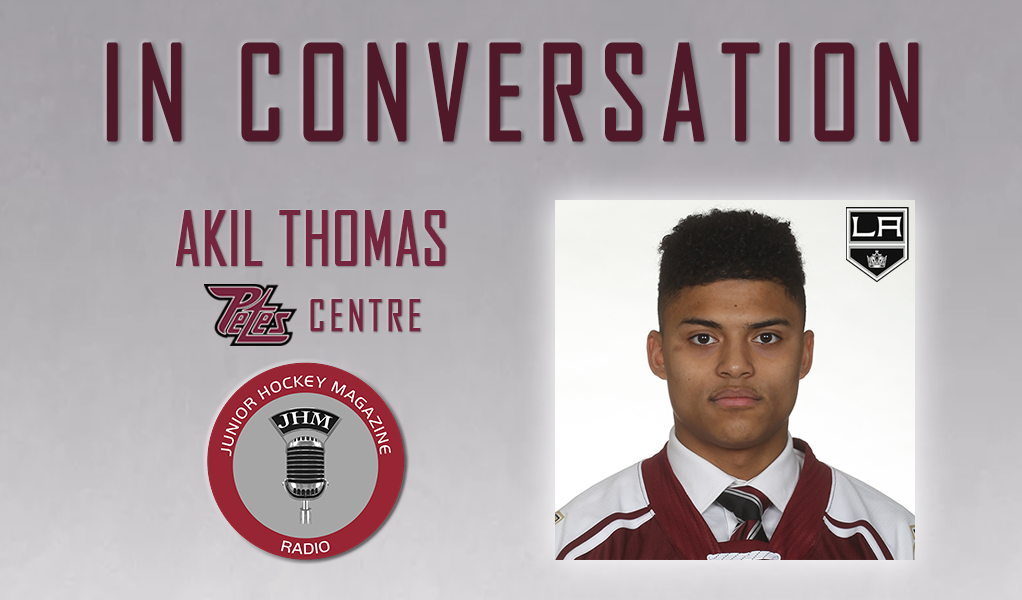 It was a goal that made Akil Thomas a national hero. Netting the game winner with less than four minutes remaining in the final frame, the marker capped an amazing third period comeback for Canada in the gold-medal game of the 2020 World Juniors, pushing the Great White North to a 4-3 regulation win against their longtime international rival of Russia and helping the country capture its 18th first-place finish at the annual classic. It is a moment that Thomas will forever remember.

The Los Angeles Kings prospect and Peterborough Petes forward recently sat down with Junior Hockey Magazine to reflect on that heroic moment in addition to a few interesting side projects that are keeping him occupied during the COVID-19 shutdown:

Junior Hockey Magazine: You’re a busy guy for a guy who is in quarantine. How are you keeping up right now?

Akil Thomas: It’s been good having time to do stuff that I don’t normally have time to do with hockey. It has been amazing. I thought business would kind of slow down after World Juniors and I was wrong, so things have been well.

JHM: What’s it been like to go from the highs of the gold-medal-winning goal at the World Juniors to what is going on right now where you are really beyond your own control forced to shut it down?

AT: It’s tough. I go from World Juniors, to being traded, to being sad about adjusting to a new team in Peterborough, but as soon as I got comfy there I got excited about going on a run with them. What has happened now is so disappointing and it has been tough to deal with to be honest but now I have had time to just focus on me and relax. Usually I am a pretty busy guy. Right now I am just hoping this calms down and fewer people get affected by it, and hopefully I can have a big summer and make the transition into pro next year. Hopefully I can do all I can right now to prepare for that, so that is what I am thinking about now.

JHM: Take us back to the goal, the moment when all Canadian hockey fans just went ballistic. It was incredible to watch. Walk us through it through your eyes and what you were feeling at that time.

AT: I didn’t play a lot in that game but I knew in the third period that at a certain time I was just thinking to myself on the bench that I hope I get another shift. I was thinking I would get one more, it will probably be around 45 seconds, so basically I have 45 seconds to score. I started telling myself, ‘I am going to score, I am going to score.’ My mom always taught me to talk things into existence. I probably told myself on the bench about 30 times that I am going to score. When Dale (Hunter) was making line combinations, I could just kind of feel his eyes on my jersey and for some reason I knew I was going to get picked to go out. I just had a weird feeling, and he said my name, and as soon as I heard him say that, I was like, ‘Wow, this is actually going to happen. I am going to go out there and score.’ I don’t really remember what happened as soon as I got out there just because it was my first shift of the period or something but I felt weird that shift, I just felt like I was on a mission. A puck squirted out to me. I thought the goalie was going to poke check it but I just had enough time and space to tuck it back in, and obviously I ended up scoring. It is probably the best feeling I have ever had in my life.

AT: I have a clothing company and I recently just started a podcast. I am kind of similar to my mom in that sense where she always had a few different jobs and opportunities on the go as I grew up so I kind of learned that from her. I am actually sitting right beside my inventory in my room right now. It is just something I kind of started when I was 15. I never really started it to be something serious. I just started making hockey T-shirts and my buddies liked it. I then kind of grew out of it and started doing stuff that people across the whole world can wear, not just hockey players who are 15 years old. It just kind of snowballed from there and now I am into something serious. The awareness about it in the last few months obviously has been crazy with a lot of people reaching out, a lot of people ordering stuff. It’s something I kind of see me falling back on after my hockey career. As a young kid, I saw my dad retire and him go through his retirement pains, just adjusting to life after hockey and it was tough. Now I am 20 and hopefully I have a hockey career ahead of me but hopefully I have something to fall back on afterwards.

JHM: You had a cameo on Soul on Ice: Past, Present, and Future, which is about the history of black players in hockey. How did that come about?

AT: Kwame Mason is the director of that. He started that. We are family friends and he reached out to us that he was making a documentary on the history of black hockey players and that he would love for me to be a part of it. I ended up getting in the film a couple of times which is pretty cool. A couple years later, I reached out to him, which would have been a few months ago, and I was like my buddy and my teammate Elijah Roberts and I are thinking about starting a podcast, so would you like to hop in, so it is actually us three on it. Last week we interviewed Joel Ward. It is interviewing ambassadors of minorities in hockey like Joel Ward. We’re telling a couple stories and just having a conversation. It just happened that we started it during this quarantine where everyone is at home looking for something to do and something to listen to.