In The System: Josh Kavanagh 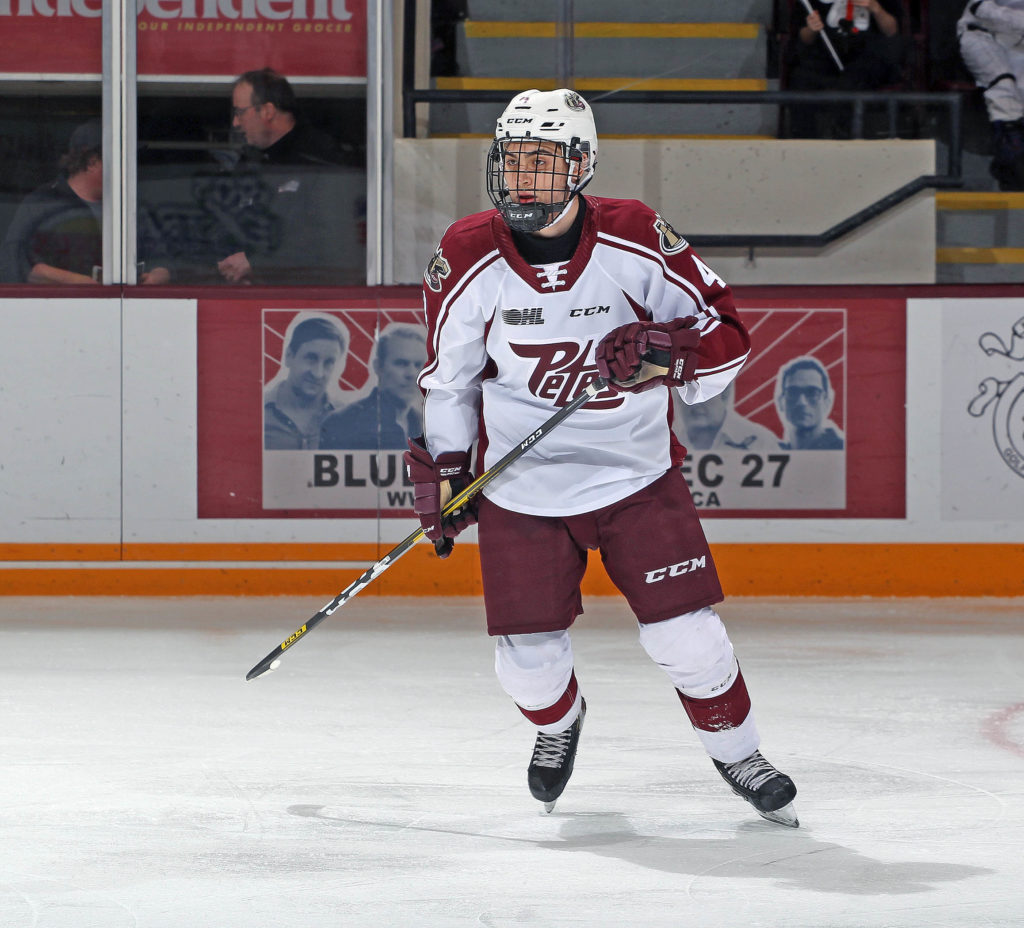 “It was such a great feeling,” said Josh Kavanagh as he reflected on being selected by the Peterborough Petes in the 5th round, 93rd overall in the 2019 OHL Priority Selection draft. “I know people from Peterborough who have said many great things about the organization and the city.”

With our 5th round pick, the Petes are please to select Josh Kavanagh of the Sudbury Wolves!

Along with the 15 other 2003-born prospects, Kavanagh’s summer was filled with hard work to prepare for his first development and training camp with hopes of cracking the 2019-20 roster.

After an impressive development camp, Kavanagh committed to the Petes on May 31, 2019 to begin the first step of his journey. He continued to excel on the ice, registering a goal and two assists while suiting up for four games during pre-season action, but a crowded blue line saw Kavanagh on the outside looking in.

“Derrick Walser (Petes Assistant and Defensive Coach) told me I was going to be playing major midget,” said Kavanagh. “It was something I had to hold onto because I wanted to play in the OHL and I was planning on playing in the OJHL in Sudbury if I didn’t make the roster.”

Petes General Manager Michael Oke re-assigned Kavanagh to the Peterborough Petes Major Midget AAA team along with fellow 2019 draftees Cole Patey and Michael Simpson. But the 6’0″, 170lbs rearguard continued to look at the big picture, which was developing himself under major midget coach Scott Roach while the Petes kept a close eye on him.

“By playing major midget, I’d still be close to the team and they can watch me all year to see how I’m doing,” Kavanagh explained. “I get to practice with the team and if I make the roster next year, I won’t be so out of place, so it’s a good thing I’m here.”

Kavanagh praised Roach for his team’s success and his individual success. “He’s a great coach,” said Kavanagh. “He’s good friends with Oke and knows what his expectations are for us. He puts his foot down on us and we have a pretty good relationship.”

As Kavanagh highlights his ability to see the ice, read a play and his shot as his greatest strengths, he recognizes that he seeks many areas to improve on in order to play at the next level.

“I think I need to work on my speed, my shot, physicality, getting and passing pucks through different angles,” admitted Kavanagh. “It’s the little things I want to work on.” A lot of these areas were improved on while playing 31-games with the major midgets. However, practicing with the Petes has been a significant step for his development.

“Like most kids his age, he needs to work on strength, speed and urgency,” said Walser. “I think anytime a major midget player practices with an OHL team, they learn about what will be expected of them, how strong and how fast the OHL is.”

While the major midget skated to a phenomenal 45-10-4 record this season, Walser noticed improvements in Kavanagh’s game. “Kavanagh is a very smart player who sees and understands the game well. I did see some maturing of his game and he has great poise with the puck,” said Walser, who watched eight major midget games this year.

Whenever the Petes’ brass watched Kavanagh and other prospects in action, they provided lots of feedback which is one of many benefits playing major midgets. “I talk to Oke quite a bit,” Kavanagh said. “Rob Wilson gives me feedback but mostly Walser does since he’s a defensive coach.” With feedback from his OHL coaches, that allows Kavanagh to reach his potential and develop.

When Oke re-assigned Kavanagh to the major midgets, he said, “By having him play with the Major Midgets, we’ll be able to keep a close eye on his development and he will be available to play for us over the course of the season should the need arise.”

The right-shot defenceman was ready on Saturday, November 2, 2019 when he was called upon to suit up with the big club as they travelled to Sudbury to take on the Wolves. What made the moment extra special was the fact he was playing his first OHL game in his hometown in front of family and friends.

“Oke called me into his office and I wasn’t expecting much,” recalled Kavanagh. “I knew we had a game in Sudbury and I was hoping I would play. When he said that I was, I was pretty excited, I texted my family and friends at home and they got a box in Sudbury. Playing in front of your friends and family is crazy as a 16-year-old but I’m glad I got to spend it with them.

While only wearing the maroon and white eight times this season and three of those games were at the Peterborough Memorial Centre, Kavanagh said the atmosphere here is like no other OHL building. “The fans here are very loud and get really into the game. You get more excited to play and it’s awesome.”

Kavanagh’s transition from Sudbury to Peterborough has been successful off the ice as its been on the ice.

“At the beginning, it was really different,” reflected Kavanagh. “There was a lot to adapt to – a new school, a new family and with hockey, but after living here for six months, it’s going pretty well.”

He admits bonding with Simpson and Patey has made the move easier, while the Petes staff and major midget coaching staff have been a big help.

As for the future of the team, Walser believes fans have a lot to be excited for and not only should they hope to see Kavanagh on the blue line in the future, but admits he will have a successful career in Peterborough.

“In my opinion, he has potential to have a great career with the Petes.”

Meet the Prospects Tuesday doesn’t have *quite* the same ring to it, but here we are!