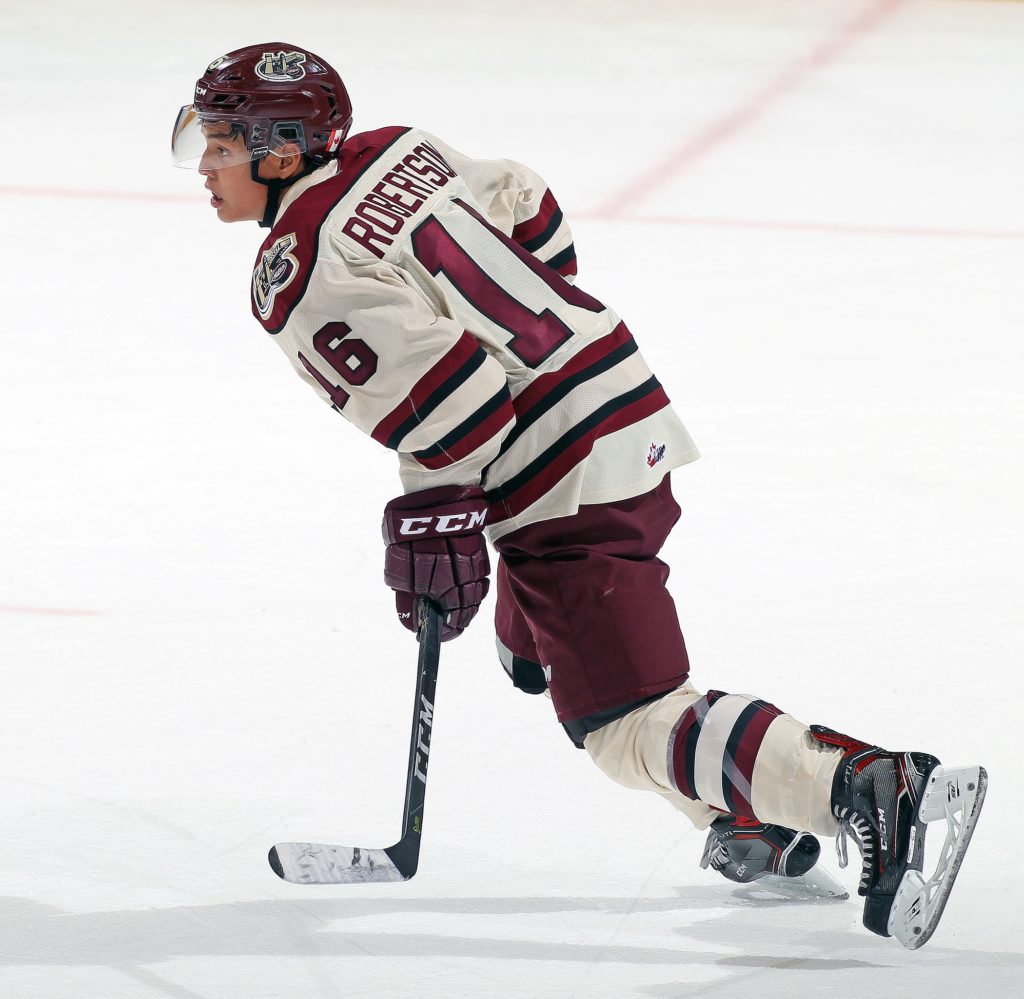 Nick Robertson, his family, and journey to the Petes are worthy of having their own television program. Although the Petes rookie lists Northville, Michigan as his hometown, Robertson’s lifestyle has been much more nomadic than the description implies, hopping between Southern California, Michigan and Toronto throughout his childhood.

Robertson began his time in minor hockey in Southern California, an area in which his dad laid roots after opening his own law firm. Nick then moved to Michigan at eight years old with his mother and two older brothers to create larger opportunities in hockey, before eventually heading to Toronto. Following his bantam years with the Vaughan Kings and minor midget stint with the Toronto Red Wings, Robertson was drafted to the Petes in the 2017 OHL Priority Selection, and signed a standard player agreement following the team’s annual development camp.

Along for his North American hockey travels were Robertson’s mother, Mercedes, and brother, Jason. His mother home-schooled the boys for a few years until the elite athletes transitioned to online school.

“It made me disciplined; I had to be more responsible with my work and make a schedule,” commented Nick.

The continuous moving and life adjustments were in the name of growing Robertson boys’ hockey careers.

“They would do a lot,” added Nick. “My dad works so hard to get us where we are. I didn’t realize how much they did, until now.”

Choosing an alternative educational route to accommodate hockey didn’t come without some tradeoffs. “My social life was impacted,” the rookie explained.

Robertson highlighted its benefits, going on to say, “It was all in good favour I trained a lot, I became more mature because I was with my mom, I couldn’t goof around.” This path throughout his teenage years has evidently paid off.

Along for this ride to the OHL is Nick’s brother, Jason. The older Robertson is already a familiar name in the OHL. He’s a 6’2, 200 lb power forward with the Kingston Frontenacs, and was selected 39th in the 2017 NHL Entry Draft by the Dallas Stars.

Although skillfully reputable, Nick is confident that when matched against his brother he will be able to hold his, “I know how he plays, and I saw his game grow, so its easy for me to say what he is and what I am.” Because of their relationship, its simple to draw comparisons between the two brothers, but the Petes rookie notes that their playing styles are anything but similar, “My brother is a goal scorer, I am a play maker. He has a long reach, I have quick feet.” 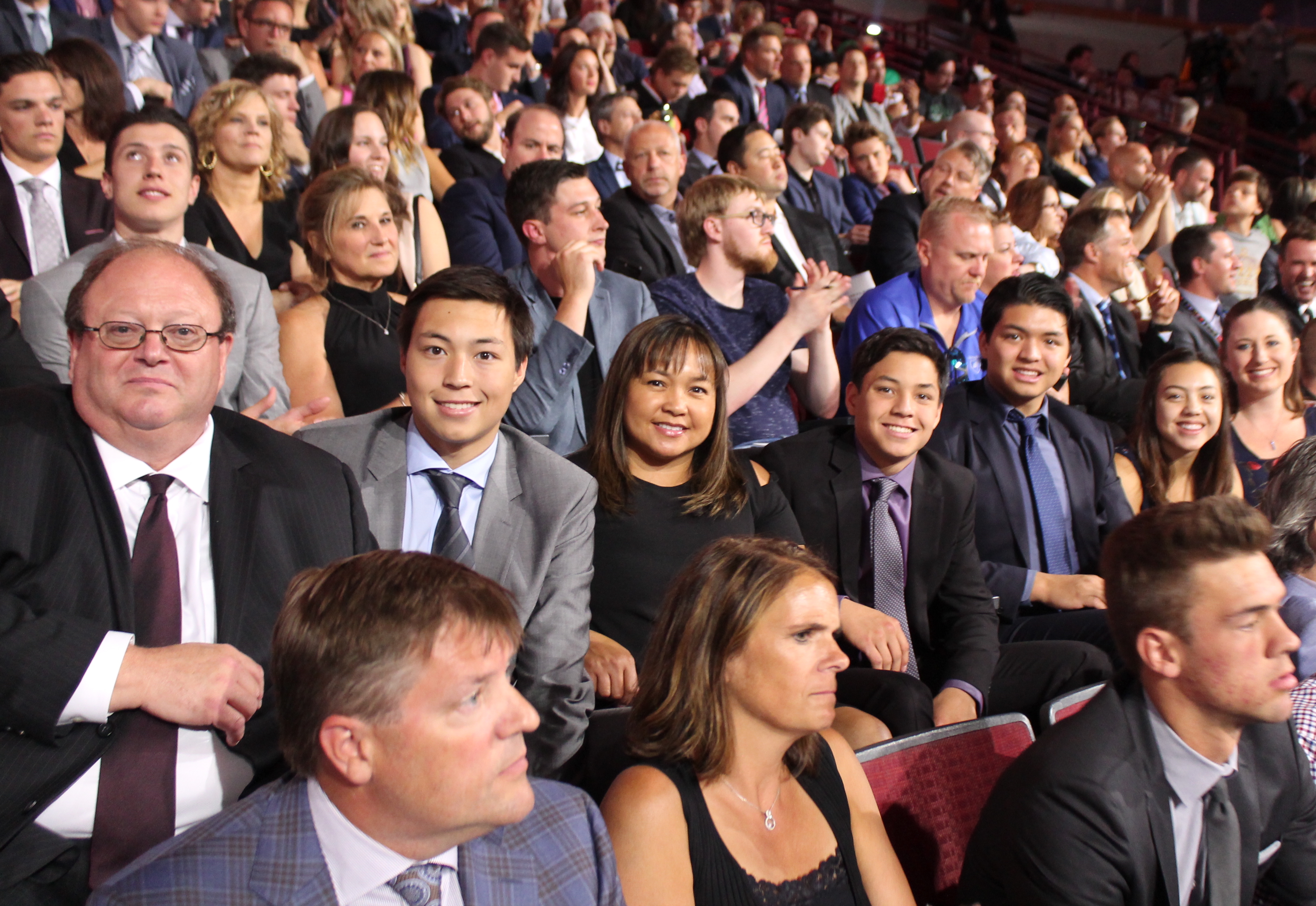 This season will be the first that sees the brothers Robertson face off against each other, although they have previously played together. Nick attributes a strong off season of workouts with Jason as a reason for being so well prepared for junior level hockey, “My brother and I were together six to seven days a week during the summer, grinding it out, we went to the beach a lot, we got closer.”

Beyond Jason, Nick has an impressive roster of siblings. His oldest sister, Alex, works at their father’s law firm; oldest brother Michael is currently attending school in Hong Kong as a student of USC, and is described by Nick as a ‘genius’; sister Brianne stepped away from the opportunity of playing Division 1 lacrosse to pursue her dreams of acting. Atop all this, Nick’s father, Hugh, Robertson may have the most outstanding fun fact, having made an appearance in the film the Notebook and having his own IMDB page.

Robertson has been blessed with a family of diligent members, who have conveyed the dedication necessary to make success tangible. His inherited work ethic is certain to prove meaningful in Nick’s career and first season with the Petes.