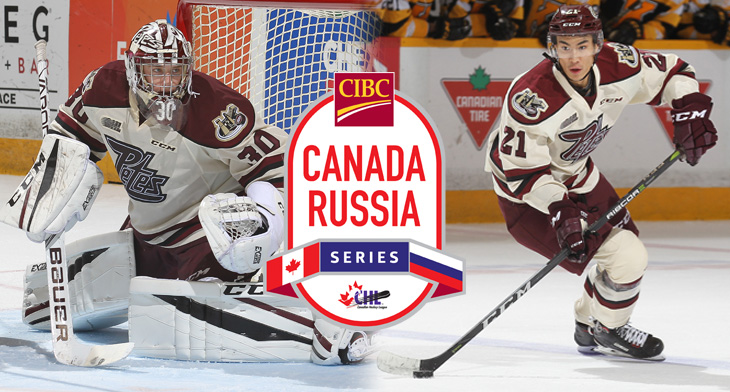 The Ontario Hockey League, in collaboration with the Canadian Hockey League, Owen Sound Attack and Sudbury Wolves Hockey Clubs, and Hockey Canada, announced today the rosters for Team OHL, which will compete against Team Russia in the 2017 CIBC Canada Russia Series. Petes forward Jonathan Ang and goaltender Dylan Wells will compete in the annual series.

28 players will represent the OHL in the 2017 CIBC Canada Russia Series, including 11 players who will compete in both games.

Wells will suit up for Team OHL in Owen Sound on Thursday, November 9, which will be his third consecutive appearance in the annual event. The Edmonton Oilers prospect has compiled a record of 5-2-0 so far this season, with a save percentage of 0.918 and a goals against average of 2.85.

Ang, who was named a Petes alternate captain for the 2017-18 season, will play in both Owen Sound and in Sudbury on Monday, November 13. The Florida Panthers prospect has recorded 62 goals, 79 assists, 141 points and 165 penalty minutes in 204 OHL games, all with the Peterborough Petes.

In Owen Sound, Nick Suzuki, Jonah Gadjovich and Markus Phillips will dress for Team OHL in their home rink, while the Wolves’ Macauley Carson will play for Team OHL in Sudbury.

In 14 years of competition against the Russian National Junior Team, the OHL has a record of 23-4-1 in this series, following a 4-3 loss in North Bay and 5-2 victory in Hamilton last season.

The Petes begin a three game road series against the Windsor Spitfires on Thursday, October 19 at 7:05pm, followed by games in Flint on Saturday, October 22 and in Saginaw on Sunday, October 23.

The men in maroon head back to the PMC on Thursday, October 26 to take on the Saginaw Spirit at 7:05pm. Game tickets are available starting at $8 through the Collins Barrow PMC Box Office, online or, by phone at (705) 743-3561.